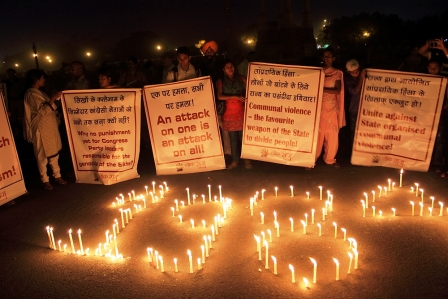 Protest rallies in Delhi and Mumbai marked the 27th anniversary of the state organized massacre of Sikhs in 1984.

Protest rallies in Delhi and Mumbai marked the 27th anniversary of the state organized massacre of Sikhs in 1984.

In Delhi, the Lok Raj Sangathan and Sikh Forum along with PUCL and PUDR organized a candle light protest at India Gate. Hundreds of people from all walks of life participated in this action. There were the families of the victims of the massacre, including young children. There were youth from the working class colonies of Delhi, who had not been born at that time, but who came forward militantly at the call of the Lok Raj Sangathan to show that they considered the genocide of 1984 an attack on all Indians, and express their solidarity with their Sikh brothers and sisters, and their determination to get the guilty of 1984 punished. There were judges, lawyers, journalists, filmmakers, academics, business professionals, and political activists of different parties and groups. Leaders and activists of the Communist Ghadar Party of India participated actively in the protest.

In Mumbai, the Lok Raj Sangathan initiated a protest action at Fort, just outside Chatrapati Shivaji Terminus. The protest was supported by the Sikh Forum as well as trade unions of the Railways, airlines, Resident Doctors and others. The protest took the form of a candle light vigil, and thousands of copies of a leaflet condemning the 1984 massacre of Sikhs were distributed. Among the prominent personalities who participated were Dr Matthew Abraham, a prominent leader of the workers unity movement, academic and social activist Dr Sanjeevani Jain, and well known lawyer Mahesh Jethmalani. A large number of Sikhs from the city came forward to participate in the protest.

The Communist Ghadar Party of India considers these actions in Delhi and Mumbai as very significant. They reveal that our people, far from being communal, consider an attack on one as an attack on all, and are determined to carry forward the struggle for justice. The CGPI congratulates the Lok Raj Sangathan and Sikh Forum for initiating these important actions.