The 31st birth anniversary of the Communist Ghadar Party of India was celebrated in grand and colourful style in Delhi on 25th December 2011. The entire program was managed from beginning to end by the youthful comrades of the Party.

The 31st birth anniversary of the Communist Ghadar Party of India was celebrated in grand and colourful style in Delhi on 25th December 2011. The entire program was managed from beginning to end by the youthful comrades of the Party.

The auditorium was overflowing. Many had to stand or sit in the aisles. The vast majority of the audience consisted of high school and college students and young workers between 20 and 25 years of age. There were youth who have become candidate members of the Party and many more who were aspiring to do so.

The program began with a beautiful summary of the history of the Communist Ghadar Party, using narration interspersed with acted out scenes and accompanying music. The inspiring and moving presentation depicted the troubled times the communist movement went through and the conditions in which a small group of staunch Marxist-Leninists initiated the preparatory work in 1977 to reconstitute the vanguard party in which all revolutionary communists can militate. The Communist Ghadar Party was born in 1980, and has since then grown and matured as a party that all genuine communists take seriously, and which speaks and acts consistently in the common interest of the working class. It is today boldly spearheading the struggle to restore the unity of Indian communists, around the aim and program of the working class to become the ruling class and reorganise society to get rid of all forms of exploitation. 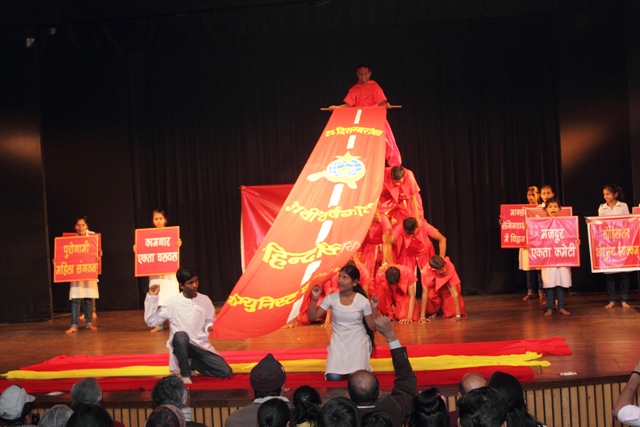 There were numerous group dances performed by girls and boys from working class families from different areas. They combined traditional folk art forms and modern group dancing with communist revolutionary content. There were Bhangras, Bhojpuri folk songs and cultural items from different regions of the country.

Brief speeches were delivered by several leading comrades of the Party in between the colourful and exciting cultural program. They called on the youth to rally around the program for the Navnirman of our state and society, to usher in a new India where workers, peasants, women and youth shall be the masters.

The atmosphere was extremely militant throughout the 4-hour long celebrations, inspiring the entire audience with revolutionary optimism about the future. It was a powerful expression of the strength and maturity that Communist Ghadar Party has gained over the years, and of the irresistible attraction of the youth to its revolutionary outlook and political line.

The celebration was a visual treat and a powerful proof that the youthful working class of our country is indeed capable of ruling and running all affairs, if only it is provided with communist education and political training.

The celebrations ended with the singing of the Internationale.