Condemn the use of weapons of mass terror by US imperialism and its allies!

Opposition is growing to the policy of US imperialism to increasingly use unmanned aircraft (called drones) to unleash death and destruction on various targets in other countries. Originally used as spy planes, drones have been modified to carry missiles and launch attacks. Over the coming decade, the US is expected to double its expenditure on drones to more than $11 billion. The command of these deadly machines lies with the American spy agency the CIA, and is located thousands of kilometres away in secured locations back in the US or in other bases.

Condemn the use of weapons of mass terror by US imperialism and its allies! 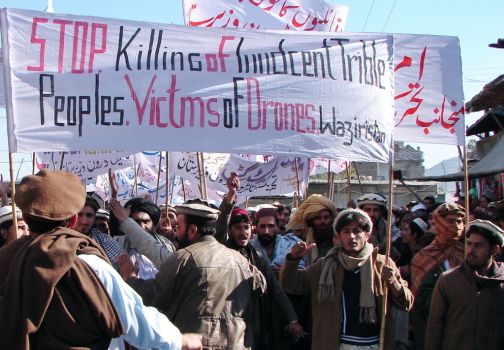 Opposition is growing to the policy of US imperialism to increasingly use unmanned aircraft (called drones) to unleash death and destruction on various targets in other countries. Originally used as spy planes, drones have been modified to carry missiles and launch attacks. Over the coming decade, the US is expected to double its expenditure on drones to more than $11 billion. The command of these deadly machines lies with the American spy agency the CIA, and is located thousands of kilometres away in secured locations back in the US or in other bases.

In Afghanistan and Pakistan, as well as in Somalia and Yemen, where these drone attacks are being carried out, thousands of civilians have been killed in surprise attacks. In Pakistan alone, the estimate is that drone strikes have killed between 1,715 and 2,680 people in the past eight years. However, the actual number of those killed, not to mention those wounded, is virtually impossible to verify. It is usually houses and civilian targets that are getting bombed by drones, on the unverified excuse that these places are hideaways for ‘terrorists’. The US imperialists claim that drones can target locations with great precision, but there is no accounting for who exactly is at those locations when they are bombed. It is known that whole families, including women and children, have been wiped out in these drone strikes. People living in the regions in Pakistan and Afghanistan that have been repeatedly bombed say that they are scared to step out of their homes and never know when a bomb may be dropped on them. The drones, in short, are nothing other than weapons of mass terror and destruction. The same US imperialists who invaded Iraq and killed Saddam Hussein on the false grounds that he had “weapons of mass destruction” are the ones who are unleashing weapons of mass terror and destruction at will.

It is significant that the UN Special Rapporteur on Extrajudicial Killings has released a report expressing concern at the “dramatic increase” in the use of drones by the US in recent times. This follows in the wake of very strong condemnations of drone strikes in both Pakistan and Afghanistan, which have borne the brunt of such drone strikes. The Pakistan Foreign Ministry in May this year declared that the "illegal attacks are a violation of (our) sovereignty and territorial integrity, and are in contravention of international law", while earlier, in March, the Pakistan Parliament had also unanimously demanded an end to the drone attacks on Pakistani territory. Hamid Karzai, the Prime Minster of Afghanistan, has also protested against the killing of civilians in drone attacks, saying that “if the lives of Afghan people are not safe, the signing of the strategic partnership [with the US] has no meaning.” Most recently, the American Civil Liberties Union in the US has filed a lawsuit demanding that details of drone attacks be made public, but the Obama government has refused to do so in the name of “national security”.

The increasing use of drone attacks, under the cover of a generalised “war against terror”, is a way for US imperialism to broaden the scope of its military operations in all parts of the world without being bound by any of the principles of the sovereignty of nations, or the international conventions on human rights and the conventions on the conduct of war, for which mankind has fought so hard in the modern era. These principles and conventions ratified in various international forums and signed by the vast majority of countries in the world, including the US, are intended to safeguard the security and sovereignty of countries and to ensure justice for victims of arbitrary use of force. However, we see that drone attacks are brazenly launched by US imperialism in other countries without even informing the authorities in those countries – even when the sovereign bodies of those countries have explicitly forbidden drone attacks on their soil, as the Pakistan Parliament had done. These attacks are launched without even the formality of having to declare war on those countries which are the targets of drone strikes. In fact, in the case of Pakistan and Afghanistan, the drone strikes are being unleashed on countries which are considered “allies” of the United States. Since the United States has not declared war on the countries on which it is launching drone strikes, its actions do not come under the purview of the international conventions on the conduct of war, such as those relating to the protection of civilians and those which restrict the extent of what can be claimed as “collateral damage”.

Drone attacks on specific targets are a form of cold-blooded execution, in which there are no charges, no defence, no witnesses and no trial. Recent reports have confirmed that the US President Obama ‘chooses’ targets from a list supplied to him by the CIA and other agencies, and authorises their elimination through drone strikes. In other words, the President of the US becomes the judge, the jury and the executioner – and that too, of persons who are not even US citizens but citizens of other countries. The United States justifies its interference in various countries around the world in the name of “defending human rights”, but it is hard to conceive of a more blatant violation of human rights than this.

The increasing use of drones, which minimizes the dangers to the attackers while maximising the destruction caused to those attacked, is also a way for the US imperialists to avoid the scrutiny of public opinion back at home. Since the “losses” are not felt in the same way as when US ground forces are engaged in combat and even when piloted aircraft are used, the cynical calculation is that the public opposition to unpopular wars will be less at home.

The use of drones show that US imperialism is pioneering a new and barbaric form of warfare, as it has done many times in the past. It cannot be forgotten that the US was the first power to drop the atom bomb, and the first to engage in chemical warfare as it did in Vietnam and other places. This only confirms that it is the most bloodthirsty and ruthless power in the history of mankind.