Mazdoor Ekta Lehar recently interviewed the Executive Chairman of All India Farmers Coordination Committee, Dr. Sunilam, about the ordinances related to agriculture sector, passed recently by the Central Government. The highlights of the interview, are presented in the following paragraphs. 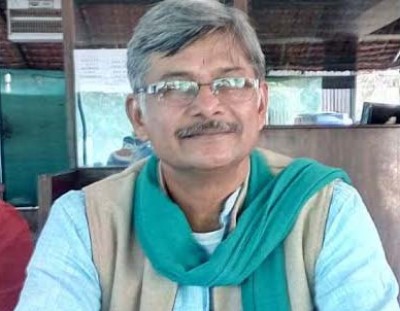 MEL: According to the ordinance on agriculture trade, passed by the government in the beginning of June, the barriers of inter-state agricultural trade will be removed. Will farmers get the right price for their produce, due to this step taken by the government?

Dr. Sunilam: Actually, this ordinance is not the way forward for the freedom of farmers, but it is the means of facilitating complete corporate loot. This ordinance passed recently suggests that the biggest problem facing farmers is that of access to the market, whereas the biggest problem of farmers is to realize the complete cost by sale of their products and debt relief. This is what the All India Farmers Coordination Committee believes.

The condition of the farmer of Multai in my Madhya Pradesh is not any different from the conditions of the farmers in the rest of the country. 85 percent of the farmers own less than one-hectare of land. They have only enough to provide for food in their house.

They take only a little portion of their produce to market. It is not possible for him to sell his crop in Kerala or Tamil Nadu. Overall, the barriers that the government is talking about are only for traders. The trader will buy from the market in one place and sell elsewhere. The produce of the farmers will go into their hands. Farmers are not going to benefit from this ordinance. Corporates will benefit from this ordinance.

MEL: Through the second ordinance, large companies of agri-business, food processing and export will be given more leeway to enter into contracts with farmers across the country for procurement of products before the sowing of crops. Will farmers benefit from contract farming?

Dr. Sunilam: Contract farming means farming on contract. This is going on even today. Farming is done on the basis of sharing the crop produce. Technically, share farming, what is currently being practiced is contract farming. But what is being proposed is that this contract will now be signed with the contracting company. Now the product has to be delivered as decided by the company. The company will pay for the seeds and other costs and will have complete control over farming. This is what happened in Punjab. Pepsi provided seeds for tomato production to the farmers and they produced tomatoes. Farmers were first paid Rs 5 per kg and then later the price was reduced to Rs 3 per kg. Farmers had to throw away tomatoes. If the farmer did not produce the product as per the contract – that is, of the size, the colour and the quality dictated by the company, it would be considered that the farmer has broken his contract. That means the farmer will have to pay compensation for it. Basically, it means that the farmer’s land will be taken over by the company in the process.

This contract law is meant to grab the land of small and medium farmers. In simple words, it is a land-grab law. Therefore, we are opposing this law.

Just imagine – how will a farmer who is not in a position to fight a small case in the local court, fight against these big giant companies? The owner of the company who will be grabbing the land, will be worth billions and trillions. His earnings will be even higher than many countries’ GDP. Is the Indian farmer in a position to defend himself against a corporate owner? There are already 10-20 giant companies active in the agricultural sector. American and European companies are eyeing to grab the land of Indian farmers. Corporates who are vociferously supportive of contract farming tell the farmers that “you will be provided with wheat and rice from America but you produce what we want”. Today, there is a conspiracy to convert the entire country into a land of “indigo” cultivation. This is the way, the East India Company first came to India and took over the land from farmers, one after the other and then the whole country itself. We had to fight for next 250 years to throw them out of India.

MEL: What kind of problems do farmers in Madhya Pradesh face, in selling their products?

Dr. Sunilam: The Agriculture Trade Ordinance wants to end the mandi system. It is absolutely true that there are some weaknesses and lacunae in the mandi system, which should be addressed. You cannot go ahead and declare that a house seeking repair should be demolished. The government wants to abolish the entire mandi system, that is, the responsibility of providing the minimum support price for the producers’ crops. They will say that there is no need to sell in the market mandi, but now the procurement will take place in the villages directly.

Only 6 percent of the country’s production comes into the mandi system. But at least a few people are able to get minimum support price.

The mandi system is in force in Madhya Pradesh. During the Corona period in Madhya Pradesh, our Chief Minister said that you do not have to come to the mandi. Your output will be purchased in the field itself. Your wheat will be purchased for Rs. 2100 per quintal. But nothing was bought. As of today, even in the mandi, wheat is being sold at Rs 1500-1600 per quintal only.

I want to give you an example. Earlier there was a mandi system in Bihar. Now after it has been eliminated, the situation there today is that while the support price of maize is Rs 1760 or Rs 1825 per quintal, it is being sold in Bihar at Rs 700-800 per quintal. At least in Madhya Pradesh currently it is being sold at the minimum support price. What I mean to say is that the end of the mandi system means the end the minimum support price system. Food Corporation of India will not exist. Ration distribution system will not exist. That is, the lives of people, who are today dependent on ration system will be put in jeopardy. We believe that every person should access the ration system, to buy as much food as he needs. But the government wants to end this ration distribution system completely.

The government says that they are not ending the mandi system right now. But if there is a no purchase of crop produce and everything will be done outside the mandi, the mandi themselves will go bankrupt. Till now there was tax levied in the mandi, the farmer used to pay the tax. The funds collected through tax were applied to road construction and development work. Now the farmer will be made to feel that he need not  pay tax, he will sell his produce outside the mandi. It is also possible that corporate business companies will pay higher price to the farmer for the first one or two years. Once the mandi are bankrupt, they will establish their complete monopoly on the market.

The All India Kisan Sangharsh Coordination Committee wants that the existence of mandi system and the procurement at the minimum support price (M.S.P be assured. As recommended by the report of the Swaminathan Commission for procurement, the MSP of agricultural products in the country must be fixed at one and half times the cost of production and the procurement at this price should be ensured by the state.

MEL: The amendment in the Essential Commodities Act will provide big businessmen and traders more opportunity to hoard and speculate on these essential commodities and make exorbitant profit. In such a situation, will the farmers get the right price?

Dr. Sunilam: This amendment allows traders to loot and hoard. They will buy when the rate is low in the market. They will have the monopoly on the market and therefore they will sell at a time and at a price they want.  Let me give the example of tomatoes. I bought tomatoes at Rs.25 per kg in the city of Gwalior during the Corona period. On the same day, one of my fellow farmers told me that the farmers were selling tomatoes at Rs.10 per kg. The companies will pick up the produce of the farmers and hoard it and black market it. This is an amendment which provides legitimacy to hoarding. The central government is doing the work of protecting hoarders.

MEL: What are the problems facing farmers in Madhya Pradesh?

Dr. Sunilam: It is not only about the farmers of Madhya Pradesh. No government in the country, has taken the problems of farmers seriously, be it the UPA government or the NDA government. These governments’ understanding is that for the country to progress, it is necessary to finish farming and destroy farmers. The model of development of our governments is the model of development based on the capitalist model being followed in the USA and Europe. Governments here are trying to implement this model.

You have seen that when electricity was privatized 10 years ago, we used to get the power at Re.1 per unit, now it is Rs.5 to Rs.7 per unit, after privatization.

Today, there is a drought situation in 17 districts of Madhya Pradesh. Many other states are facing flood situation. The loss of farmers due to natural calamities is never compensated. Also, the insurance companies and the banks together have formulated laws in such a way under crop insurance that the farmers only have to bear the loss.

The second issue is M.S.P. Only the MSP is announced but no procurement.

The third issue is related to milk, which has a huge role in the economy. Farmers used to earn something to meet their expenses by selling milk. Earlier the price of milk was Rs 35 a litre, today it is Rs 17 a litre. The government is importing milk powder from the international market, so prices of milk have crashed in India.

The fourth issue is of debt. In the Madhya Pradesh elections, the Congress party had announced that they will waive farmers’ loan up to Rs 2 lakhs. After the government was formed, only up to Rs.50,000 of loans taken by societies were waived but the remaining loans were not waived

Land acquisition is a very big issue in Madhya Pradesh. For example, we had a very old movement going on against the Adani State Power Project in Chhindwara. The project did not materialize. If this project is cancelled then under the Land Acquisition Act, the land should be returned to the farmers. But the land is not being returned to the farmers. Now new power projects are being announced. The government of Madhya Pradesh is allowing the setting up of power plants up to 21,000 MW, while the total demand is only 9000-10 000 MW. The same situation prevails all over the country. Through the government, corporates are looting water, forests and land.

MEL: Tell us about the movement against the ordinance, being led by a joint forum of farmers’ organizations.

Dr. Sunilam: Save farmers, farming and villages; The farmer should be debt-free and he should get the full price and compensation for his crop; Waive electricity bill and reduce the price of diesel to half; Prohibition on land acquisition. These are our demands, part of our 9 demands. We demand that the three ordinances, which will end the mandi system, should be withdrawn. In support of our demands and against the ordinances, 250 peasant organizations have come together and given a call for an all India protest on August 9, 2020, with the slogan ‘Corporate Bhagao and Kisani Bachao’.

We are also protesting on 9th August along with all the farmers’ organizations across the country. We will submit a memorandum to the Prime Minister and the state governments demanding to solve the problems of farmers.