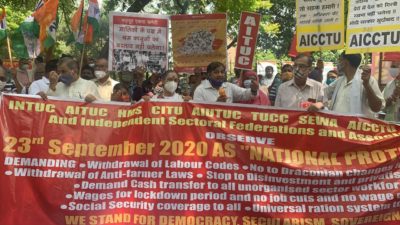 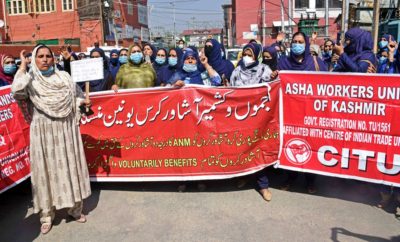 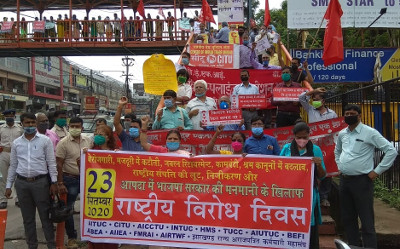 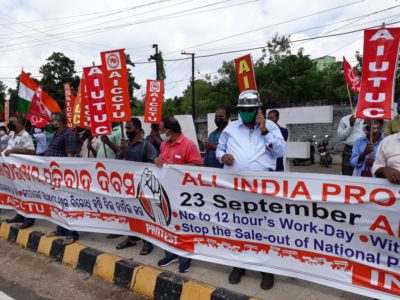 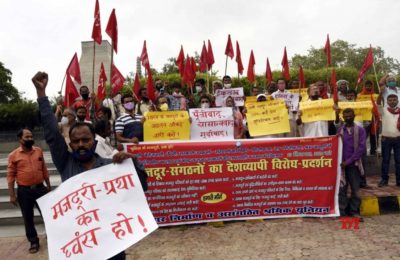 On 23rd September 2020, workers responded to the call of the Central Trade Unions and organized demonstrations at many different places across the country, to oppose the government’s anti-worker, anti-farmer and anti-national policies. These demonstrations were against the three anti-worker labor code bills and the anti-farmer bills relating to agriculture, which the central government has recently passed despite massive opposition in Parliament.

Hundreds of workers gathered at the Bank of Baroda on Parliament road. They then marched towards the Parliament. Police stopped the procession at Jantar Mantar, where the workers staged a militant protest.

All the speakers strongly criticized the anti-worker and anti-farmer bills. They explained that these bills will only benefit the big capitalists of the country and not workers and farmers. Taking advantage of the corona pandemic, the government is taking steps that will lead to huge increase in profits of the capitalists, while farmers will get destroyed and workers will lose all their hard-won rights. The speakers strongly condemned the fact that at a time when thousands of farmers in many areas of the country have come out on the streets to oppose the bill, these anti-farmer bills were passed in the Parliament. Similarly, trade unions and workers organizations across the country have strongly opposed the three labor code bills, which are a ruthless attack on their right to strike, to form trade unions and on their social security. It is the rule of big capitalists today and the government is working for their benefit. The demands of workers and peasants are being completely ignored. The workers and peasants must unite and intensify their struggles against the rule of the capitalists. 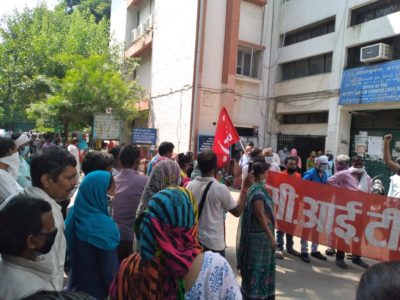 On the call of the joint trade unions, the Mazdoor Ekta Committee and CITU jointly organized protests at the District Labor Office of South Delhi. Over 200 workers enthusiastically participated in the demonstration.

Slogans like, ‘Down with the anti-workers and anti-farmers government’, ‘We reject the labour code bills that serve the capitalist interests’, ‘Withdraw privatisation of public institutions’, and ‘Inquilab Zindabad’ were raised by the protesters.

Birju Nayak and Lokesh Kumar from Mazdoor Ekta Committee and Jayprakash Dubey from CITU were among those who addressed the protesters.

According to reports, workers protested at Delhi Labor Commissioner Offices in Nimdi and Jhilmil colony. In addition, militant demonstrations were organized in the labor offices in and around Delhi, as in Gurgaon, Faridabad, Ghaziabad, Noida, Gautam Budh Nagar, etc.