The second ministerial meeting of the Quadrilateral Security Dialogue, or Quad, is scheduled to be held in Japan on October 6-7. The Quad consists of four countries — US, Japan, Australia and India. External affairs minister S Jaishankar will represent India at the meeting. 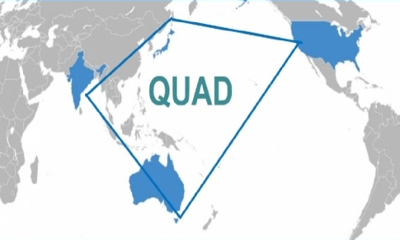 Quad is the core of a US sponsored military-strategic alliance in Asia Pacific region. Its aim is to militarily encircle China and to establish US domination over Asia.

The current Quad meeting is taking place in the background of a concerted effort of the US to demonize China, isolate it, threaten it militarily and strangle it economically. US warships are carrying out military exercises in the South China Sea. The US is arming Taiwan and is instigating other states in South East Asia against China. It is brazenly interfering in the internal affairs of China, supporting anti-government forces in Hong Kong and Xinjiang.

The US has been imposing a series of sanctions on China, targeting high end technology Chinese companies.  It has banned their operations in the US, claiming they are security threats. It is putting pressure on its European allies, Japan, India and other countries to do the same. It has accused China of intellectual property theft and cyber espionage. It has been using the coronavirus pandemic to whip up anti-China hysteria worldwide, accusing China of deliberately unleashing the virus and concealing facts about it.

The US has been working single mindedly to ensure India’s active participation in Quad. It wants to use India’s vast population and massive armed forces as cannon fodder in a war with China. It wants to use India as a base for military operations against China from the South. Towards this end, the US has been systematically fanning the imperialist, great power ambitions of the Indian ruling class and urging it to aggressively take on China.

In the context of the recent border clashes between India and China, the US has declared its support for India. It is calling upon India to abandon multilateral groupings involving Russia, China and India such as the Shanghai Cooperation Organisation (SCO) and align its strategy with that of the US.

US Deputy Secretary of State Stephen Biegun said, in a discussion organised by the US-India Strategic Partnership Forum on August 31,that “US seeks to formalise its closer defence ties with countries of the India-Pacific region — India, Japan and Australia — similar to something like the North Atlantic Treaty Organisation (NATO) with an aim to counter China.” The aim was to get the four countries to work together as “a bulwark against a potential challenge from China”. NATO is an aggressive military alliance under US leadership which has been the instrument of US domination over Europe. Foreign minister Jaishankar actively participated in this discussion on August 31 and did not counter Biegun’s views. It shows that the government of India, in pursuit of its own imperialist ambitions, is actively participating in the US strategy to encircle China and dominate Asia.

The military-strategic alliance of India with the US is steadily growing. In 2016, the US designated India as a “major defense partner”. India has signed agreements allowing US armed forces to use its military bases for rest and refueling. India and US have agreed to a common communication system for their armed forces. India is soon expected to sign an agreement with the US to share satellite information. India has invited US, Japan and Australia to participate in the Malabar naval exercises scheduled to be held later this year.

India’s military-strategic alliance with the US and its participation in Quad is a major factor leading to deepening of suspicion and tension between India and China. It is creating the condition for wars between our two countries. In 2008, just a year after Quad was first set up, the then Prime Minister Manmohan Singh announced that India attached priority to its relations with China and would not be a part of any “contain China” strategy. This led to improvement in relations with China. However, the US has been working systematically to ensure that India aligns its strategy with that of the US. Towards this end, it has been instigating India against China. The 2017 military confrontation between India and China at Doklam, at the junction of the borders of India, China and Bhutan, was a result of this. This in turn was presented by proponents of the Indo-US alliance as justification for strengthening the same. Quad was revived in 2017, with India returning to it after nearly a decade.

At the present time, the relations between India and China are very tense, following clashes in the Ladakh border. The foreign Ministers of the two countries met in Russia in the beginning of September and agreed to steps to reduce the tensions. There are political forces in India who are arguing that it is in India’s interest to join the US in encircling China. They are wrong. They are playing into the hands of US imperialism.

Conflict between India and China is not in the interest of either of our countries. US imperialism is trying to sow discord between India and China and to fan the flames of conflict between these two major powers of Asia, so as to weaken them and pave the way for American domination over Asia. India’s participation in Quad and its military-strategic alliance with the US is a factor fueling conflict in Asia. It is a factor for war.

The drive of US imperialism to establish its domination over Asia is the main factor behind the increasing tension in the Asia Pacific region. Experience of history shows that the US has never been a reliable ally of any other country in the world. The US imperialists make and break alliances to suit their own self-interest. They support this or that country as long as it serves their hegemonic aim. They have no hesitation is destroying that very same country once it has exhausted its potential to be of use to them.

India must not fall into the US imperialist trap. It should refuse to be part of any US led military alliance.