Farmers across the country have risen in powerful protest against the recent enactment of three anti-farmer laws. Over 250 farmers’ organisations organised a country wide bandh on 25 September. The bandh call drew support from central trade unions and hundreds of workers organisations. 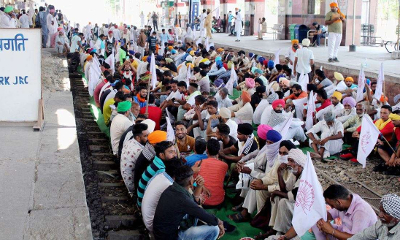 In Punjab, the decision of 31 farmers’ organisations to organise chakka jam and rail roko for three days from 24 September has won the support of the masses of people of towns and villages. In Haryana, 17 farmers’ organisations gave a joint call to lay siege to the home of the Deputy Chief Minister, Dushyant Chauthala, demanding his resignation from the government. Over ten thousand farmers gheraoed his home in Sirsa on 6 October, braving tear gas and lathi charges. Reports are coming in of continuing farmers’ protests from other states of the country.

In these conditions, the Central government, the Prime Minister, and his Party have let loose a propaganda barrage in an effort to break the unity of farmers and disrupt their struggle. Blatant lies are being peddled about the benefits that will allegedly accrue to farmers across the country.

Prime Minister Narendra Modi and his cabinet ministers claim that these laws will unshackle and free the farmer from “villainous and exploitative” middlemen. They are repeating day in and day out that these laws will lead to doubling of the income of farmers and ensure greater prosperity for them. The laws have been presented as the key to the empowerment and enrichment of farmers.

It is not at all true that farmers are now free to sell their produce anywhere in the country,wherever they can get the best price. The majority of farmers in the country are peasants toiling on small plots of land.  They can either sell to local private traders who will lift the produce from the farm or transport the produce to the nearest mandi.  Their choice depends on the distance to the nearest mandi and whether they can afford to pay the cost of transport.  Even at the mandi, not all produce gets sold at the Minimum Support Price (MSP).

Over the years, farmers have been facing cartels of traders against whom they have no bargaining power. Very often, they are forced to sell their crops at a distress price. Nearly 60-70 per cent of agricultural produce is sold to local private traders at prices below the MSP. This is why farmers have been demanding guaranteed government procurement of all agricultural produce at or above the MSP, calculated at 50% above the cost of production, taking into account family labour and the land rent. Successive governments have been refusing to fulfil this entirely just demand.

Political parties, when in the opposition, claim to support this just demand, only to renege on their promise when they come to power. Now, by passing the three anti-farmer acts, the NDA government has shown that it has decided to  establish a trading system in which wholesale agricultural trade will be completely dominated by monopoly traders and agri-business corporations.  To achieve this aim, the government is determined to end even the existing limited scale of government procurement of selected crops.

The provisions on Contract Farming has compounded the insecurity of the farmers. Their experience is that the big corporations which contract to buy their produce at fixed prices arbitrarily violate the terms of the contract. In the beginning, they incentivise the farmer to shift to cash crops that they contract to buy. Then they advance various pretexts to pay less than what they had agreed to.  When there is a bumper crop, they use this fact to beat down the price, or refuse to buy the crop citing quality reasons. The farmer is ruined.

According to the Agriculture Minister, in the event of a dispute, the farmer can find redressal in the local authority like the Sub-Divisional Magistrate, and if that fails, he can go to the courts. Only those who have no connection with reality can suggest that a peasant who has been ruined by a capitalist corporation has the wherewithal to fight against it in the courts. Farmers have next to no bargaining power against these large corporations.

The Essential Commodities (Amendment) Act is clearly in favour of the monopoly traders and agro-processing companies. It will result in increased hoarding and speculation in agricultural produce. Monopoly traders will buy up the farmer’s produce at harvest time at prices well below the remunerative price, hoard it and sell it later at high prices. This is against the interests of masses of farmers, agricultural workers as well as urban working people.

All three Acts serve to do the opposite of what the government is claiming. The farmer will be completely at the mercy of the trading monopolies.  More farmers will be  ruined as these legislations get implemented.

The government is trying to pacify farmers with announcements of MSP for the current harvest to show that MSP is not dead! It has declared that it has no intention to end the mandi system. The farmers of our country are not fooled by all this. Bitter life experience has taught them that the capitalist class and their governments must never be trusted. They mouth sweet words about how their heart bleeds for farmers, only to drive a dagger into their backs.

The struggle that farmers are waging today is not only a struggle in defence of their own livelihood. It is a struggle which is also in the interests of all workers. If government stops procuring of food grains, it will lead to the elimination of the existing limited public distribution system for wheat and rice.

The hundreds of farmers’ organisations which have come together in the ongoing struggle are determined to prevent the ruling capitalist class and its political parties, such as the Congress Party, to divert and mislead them.  They are consciously keeping a distance from such political parties which are currently in the opposition and are mouthing pro-farmer slogans. They know that such parties are never going to implement the longstanding demands of  farmers.

The real ally of the farmers of our country are the workers. Together, workers and peasants make up the overwhelming majority of the population. The support that farmers organisations have received from workers’ organisations in their struggles and the support that workers have received from the farmers’ organisations shows that worker-peasant unity is a real possibility.  The need of the hour is to strengthen this unity and escalate the struggle, with the aim of establishing workers’ and peasants’ rule in place of the rule of the capitalist class.  Only then can the economy be reoriented, from being geared to fulfilling capitalist greed to fulfilling the needs of the people.