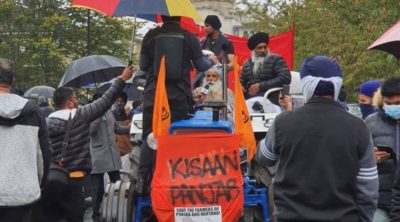 A powerful protest rally supporting the struggles of peasants in Punjab and other parts of India took place in Southall on Sunday 4th October. The protests were backed by Guru Singh Sabha Southall and drew support from wide sections of the community. The Indian Workers Association and Ghadar International also took part and expressed solidarity.

The protest march started form Guru Singh Sabha at Havelock Road and people assembled near the Southall Town Hall towards the end of the rally. Hundreds of people joined the rally in cars, vans, trucks as well as marching on foot despite continuous rain.

People shouted militant slogans of Kisan Mazdoor Ekta Zindabad, Shaheed Bhagat Singh Zindabad and Inquilab Zindabad. They demanded repeal of these anti-peasant and anti-social bills.  They expressed solidarity with peasants in Punjab and across India who are marching on the roads and rallying in meetings to denounce the passing of three bills relating to trade and storage of agricultural products. These are the Farming Produce Trade and Commerce (Promotion and Facilitation) Bill, 2020’, ‘The Farmers (Empowerment and Protection) Agreement on Price Assurance and Farm Services Bill, 2020’ and “The Essential Commodities (Amendment) Bill.  They are also opposing the Electricity (Amendment) Bill 2020, which will drastically increase the cost of power for the peasants.

The agitating peasants are extremely angry that the government has gone ahead and rushed these bills through Parliament despite widespread opposition from all quarters.  Peasants in Punjab organised a 3-day rail blockade 23rd-25th September. A country-wide bandh took place on 25th September. The All India Kisan Sangarsh Coordination Committee (AIKSCC) which is a coalition of 250 peasant organisations has demanded that the President must reject and send back the bills. Many parties in Parliament have also opposed the bills.

Representatives of Ghadar International, Indian Workers Association as well as many other organizations addressed the rally. Salvinder Dhillon of Ghadar International pointed out that the Indian State passed these bills without discussion in Parliament showing that there is no real democracy in India. The peasants in Punjab and elsewhere have already been suffering from growing indebtedness and hundreds have committed suicide. Now the Indian State has further deprived peasants of the means of their livelihood by bringing trade in agricultural produce under the control and domination of capitalist monopolies, Indian and foreign. These capitalist monopolies will ensure maximum profits for themselves at the expense of peasants. These will lead to further impoverishment and ruin of peasants and others affected by these laws. The same Indian State attacks the rights of workers, trade unions, students and women. Peasants, students and all toilers should unite and create a system in which the working people, peasantry and all oppressed sections are empowered to be decision makers and masters of their own destiny. The economy should serve their needs and not that of bourgeoisie. Wealth created by the labour and resources of our country should not be expropriated to enrich the Tatas, Birlas, Ambanis and multinationals but used to continuously uplift the living standards of workers, peasants and all toiling sections of society. We struggle for a society in line with the vision of our beloved patriot Shaheed Bhagat Singh and other freedom fighters. All concerned people and organisations must stand with the peasants who are protesting across the country to reject these bills and demand that they be withdrawn. It is totally condemnable that the government wants to completely abdicate its responsibility for guaranteeing security of livelihood to the peasants.

Note: The President of India has given his assent to these three bills and they have become laws. But the fight goes on.

Down with the anti-peasant and anti-social bills!
Long live the unity of workers and peasants in opposing the attacks on their rights!