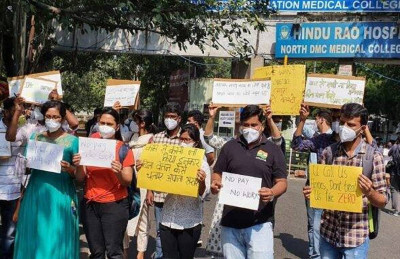 Doctors and Nursing Officers of Hindu Rao Hospital, run by the North Delhi Municipal Corporation, held a protest action on October 10, 2020 at the main gate of the Hospital. Holding up placards and raising slogans highlighting their plight, the agitating doctors and nurses demanded payment of their pending salaries. They have not been paid their salaries for the past three months. The resident doctors’ and nurses’ associations had raised their problems with the authorities of the hospital as well as with the Municipal Corporation authorities several times. After “symbolic” protest actions, the Resident Doctors’ Association of Hindu Rao Hospital as well as the Nurses’ Association have announced an indefinite strike from October 11, since their salaries of the past three months have not yet been released.

Hindu Rao Hospital is the largest municipal hospital in Delhi with 900 beds, and is currently a dedicated COVID-19 treatment centre, since mid-June. The hospital has 343 beds for the treatment of Covid-19 patients. Several doctors and nurses at the Covid-19 centre of the hospital had contracted the infection earlier. They have been bravely performing their duties all this time despite the financial difficulties faced by their families. 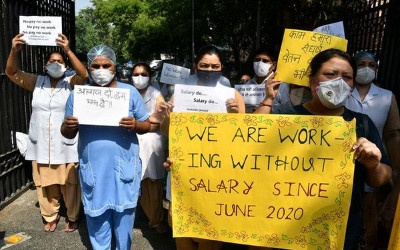 Explaining the reason for the strike, the president of the Hindu Rao Resident Doctors’ Association questioned, “Why should doctors and nurses, who are at the forefront of the Covid-19 fight, have to go on strike to get their basic right of salary?” He claimed that the Corporation receives revenue worth hundreds of crores in taxes every month. Approximately Rs. 13 crore would be sufficient to pay the doctors and nurses their pending salaries, which the Corporation authorities are refusing to do.

The doctors and nurses who are working against heavy odds are caught in the cross-fire.