After a successful All India Strike on 7th and 8th of September 2020, workers of Bharat Petroleum Corporation Limited (BPCL) have decided to step up their agitation against privatisation of the company. They are also demanding the finalisation of the long overdue wage settlement known as Long Term Settlement (LTS). The management has delayed this for over 36 months under one pretext or another.  They have decided to go on a 5 day strike from 2nd November 6th November 2020. For this all the unions of BPCL will be issuing strike notices immediately. 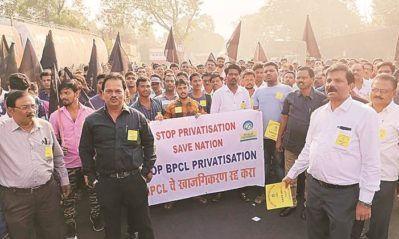 Workers’ unions have denounced the government’s attempts to divide workers and set them against each other. Under the pressure of the government and the management, two out of 18 unions in BPCL separately agreed to an unjust wage agreement. Simultaneously the BPCL management announced an Employees Stock Option (ESOP) whereby 4% of the company’s shares will be sold to the employees at one third the market value. Using this as a carrot, the BPCL management is pressurizing the BPCL employees to individually sign the fraudulent wage agreement with the threat that they will be entitled to the ESOP only if they sign the agreement.

At the same time the management is going about viciously targeting the workers by threatening to deduct 8 days wages for the two days of strike in September 2020. The unions have decided to jointly oppose this as well.

All these anti-worker policies of the management are being carried out with the aim of weakening the united opposition of the BPCL workers to privatisation. However in spite of this, the BPCL workers are united in their opposition to privatisation. On September 25th 2020, the workers of Kochi refinery in Kerala held 1000 simultaneous street corner meetings in Ernakulam district, Kerala to explain to the people at large why privatisation of BPCL is against the interests of the people and the country.

It must be noted that the date for opening bids for sale of BPCL has been postponed 5 times since March 31. The government has now announced November 16 as the last date for Indian and foreign oil companies to offer Expression of Interest (EOI) in buying BPCL. One of the factors behind the repeated postponement is that prospective bidders are worried about the militant and united opposition of BPCL workers to privatisation. They want the government of India to smash workers unity and sabotage their just struggle. The Central government is trying to break the unity of the oil workers through various ways, in order to push through the privatisation of BPCL.

The Communist Ghadar Party condemns the anti worker moves of the government and the management of BPCL and extends complete support to the struggle of the BPCL workers against privatisation.