Successive governments headed by the Congress Party and BJP have been pursuing the program of privatisation of petroleum refineries over the past three decades. The present government has invited expressions of interest from private Indian and foreign companies for the purchase of Bharat Petroleum Corporation Limited (BPCL).  The workers of BPCL have been organising united protest actions against the decision to privatise this company.  They launched a two-day strike on 7th and 8th September this year. They have decided to go on a five-day strike from 2nd to 6th November, demanding an immediate halt to the privatisation plan.

Petroleum is of strategic importance to the country.  The army, navy and air force all depend heavily on refined petroleum products for their fuel requirements.  Petroleum is a vital source of energy and fuel for road and air transport, for industrial furnaces and boilers as well as for power generation. It also provides raw materials for production of petrochemicals, plastics and fertilizers.  The prices of petroleum products affect the entire population.

India is the third largest market for petroleum products in the world.  Indian demand is growing four to five times faster than the global average.  Total consumption of crude oil was about 212 million metric tonnes (MMT) in 2018-19. India’s annual oil refining capacity, at 249 MMT, is the fourth largest in the world, next only to the United States, China and Russia.

There are 16 refineries in the public sector.  Two refineries have been set up as joint ventures – one between HPCL and LN Mittal group (owner of the world’s largest steel company) and the other between BPCL and Oman Oil Company. There are three refineries in the private sector – two owned by Mukesh Ambani’s Reliance Industries and another by the Russian company Roseneft (earlier owned by Essar of Ruias). 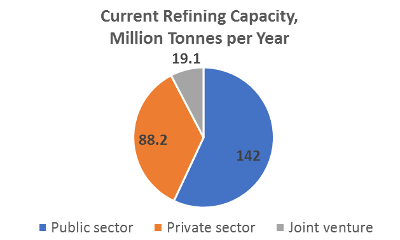 Over 90 percent of the country’s fuel requirement is met by three public sector companies – namely, Indian Oil, BPCL and HPCL. The total annual capacity of these three companies has grown from less than 4 MMT in 1976 to 170 MMT at the present time.  Their total assets are worth more than Rs. 5.5 lakh crore. The privatisation of BPCL and HPCL will reduce the share of public sector refining capacity from 60% to around 42% (See Figure 1).

The profitability of petroleum refineries is generally not affected by variations in crude oil price as long they are able to adjust fuel prices up or down in line with the price of crude oil. This makes oil refining a steady generator of huge profits. This is one of the reasons why the biggest Indian and foreign private companies are interested in acquiring the public sector refining companies in our country.

The gradual privatisation of public sector oil companies through divestment of their shares has been going on for more than a decade. The first attempt to totally privatise a public sector refining company was made in 2003.  The powerful united opposition of workers compelled the Central Government to postpone its plans.

In 2016, under the guise of repealing out-dated laws, the Central Government annulled the Act of 1976 that had nationalised the erstwhile British Company Burmah Shell, and the American Companies Esso and Caltex, to create BPCL and HPCL respectively. Since then, the outright sale of public sector refining companies is being pursued by the present government.

It is worth recalling that the nationalisation of the British and American owned private companies between 1973 and 1976 had been carried out due to strategic defence considerations.  Under Anglo-American pressure, the foreign oil companies had refused to supply fuel to the Indian Navy and Air Force during the Indo-Pakistan war in 1971. Their nationalization was followed by the introduction of the Administered Price Mechanism to regulate and limit the prices of petrol, diesel and other petroleum fuels.

Following the unveiling of the program of globalisation, liberalisation and privatisation in 1991, the Central Government set up a group under the chairmanship of the then petroleum secretary, Vijay Kelkar.  The Kelkar Committee recommended the deregulation of marketing and pricing of petrol, diesel, kerosene and LPG.  Its recommendations were approved in 1998.  In April 2002, the Central Government announced that petroleum products would be fully deregulated.  It abolished the Oil Coordination Committee, which used to administer price control. Licenses for retail distribution of petrol and diesel were issued to private refineries.

The growing Indo-US strategic-cum-military alliance is casting its shadow on the changes taking place in the Indian petroleum industry.  In November 2018, India succumbed to the pressure of the US and accepted compliance with economic sanctions against Iran. The import of crude oil from Iran fell from 23.9 MMT in 2018-19 to just 1.7 MMT in 2019-20.  At the same time, oil imports from the US rose from 1.9 MMT in 2017-18 to more than 13 MMT in 2019-20.

In 2019, the central government owned Oil and Natural Gas Corporation (ONGC), which had been independently exploring oil for the past six decades, was made to collaborate the private American oil monopoly, ExxonMobil.  ONGC and ExxonMobil have jointly bid for oil blocks in the latest round of auctions in 2020.

Saudi Arabia, a close ally of the US in the international oil market, is also penetrating the Indian petroleum industry. ARAMCO, the world’s largest oil company owned by the Saudi government, is currently in discussion with Reliance Industries to supply 40% of the latter’s crude oil requirement and buy 20% share of its petroleum refining business. The Indian government has also invited ARAMCO to form a joint venture with the three biggest Indian public sector companies, IOC, BPCL and HPCL.  A giant refinery with annual capacity of 60 MMT is being planned under this joint venture, with total investment of Rs. 3 lakh crore.

All these facts show that the plan to privatise oil refineries poses grave dangers.  It will lead to even steeper hikes in the prices of essential fuels, which impact the prices of all essential commodities.  It threatens to further increase India’s dependence on foreign oil suppliers, especially the US and Saudi Arabia.

In pursuit of the imperialist aims of Indian monopoly capitalists, the Central Government is throwing all caution to the winds.  While proclaiming self-reliance as a guiding principle, it is moving in the opposite direction of increasing reliance on the US and its allies.  It is acting against the well-being of the people.

The struggle of the working class against privatisation of petroleum refineries, including the five-day strike announced by the BPCL unions, deserves to be supported by all Indians who care about the people’s well-being and about national sovereignty and self-reliance.