The Genocide of Sikhs in November 1984 will never be forgotten or forgiven by our people!

A public meeting was held on October 31, at Jantar Mantar, New Delhi, to mark 36 years after the brutal massacre of Sikhs in Delhi and other places in November 1984. 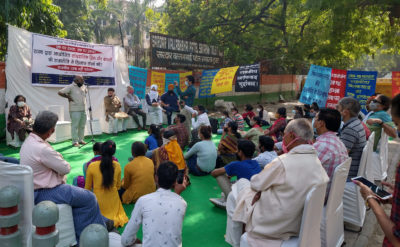 “An attack on one is an attack on all!”, “Resolutely oppose state organized communal violence and politics of division!”, “Down with state terrorism!” – these slogans on a huge banner provided the backdrop of the meeting. Banners bearing slogans such as “Down with the politics of divide and rule!”, “Let us unite to put an end to state organized communal violence and state terror!”, “State terrorism, down, down!”, “Indian state is communal!”, were prominently displayed all around the venue.

S. Raghavan, President of Lok Raj Sangathan, recalled the gruesome incidents that rocked the city following the assassination of India Gandhi. “We will never allow the genocide of November 1984 to be forgotten or forgiven”, he said. He emphasized that the genocide was not a spontaneous reaction of Hindus against Sikhs, as the official propaganda tries to make out, but an incident of state organised communal violence and terror, meticulously planned at the highest levels of the state. However, the Indian state and its agencies continue to refer to the genocide of November 1984 as ‘riots’ to hide the reality from the people of our country, particularly the youth of today. It is essential to demand and insist that the guilty are punished. Who are the guilty? S. Raghavan explained that the guilty are not merely some goondas who committed acts of arson or murder, but those in command, at the highest levels of authority, who masterminded the genocide. Should not the Prime Minister, the Home Minister and top officials of the police and intelligence agencies be held responsible, he asked. He concluded with a rousing call to all Indians of conscience to demand and fight for truth and justice – that is, to demand that the guilty must be punished and the crime against people committed by the Indian state be recorded as genocide.

“The real criminals must be identified”, said Birju Nayak, speaking on behalf of the Communist Ghadar Party of India. If the entire history of the past 36 years is examined, it is clear that communal violence is a political tool of the ruling class.  The capitalist monopoly houses use this tool to smash the unity of the toiling masses again and again. They use it to stabilize their rule.  They organize communal violence to prevent people from uniting against their dictatorship. The ruling class is guilty – and so are the political parties through which these crimes are carried out. We must reject and oppose the path of joining hands with Congress Party in the name of defending Secularism and opposing Hindutva.  An important lesson of history is that BJP and Congress are two sides of the same coin, both part of the strategy of divide and rule. He called on all participants, particularly the youth, to unite against state organized communal violence and state terror. The way forward is to build and strengthen unity of all sections of the exploited and oppressed against the rule of the capitalist class, headed by the monopoly houses. He elaborated on the vision for new India that we must build, in which prosperity and protection will be guaranteed for all.

Others who addressed the meeting included journalist and ex-MLA Jarnail Singh,  Siraj Talib of Welfare Party of India, K.K.Singh of Lok Paksha, and Aiman Rizwi.

Speakers pointed out how the genocide of 1984 was not a spontaneous outburst of “Hindus taking revenge against Sikhs”, but a deliberate state-organised crime. As the overwhelming evidence in the reports of several Commissions of Inquiry has clearly shown, it was planned several months in advance and at the highest levels of state, including the ruling party, the cabinet, security officials, and the bureaucracy. The entire state machinery was deployed to carry out the massacre. Top leaders of the ruling party led the mobs. The police forces were under orders to disarm the Sikhs on one hand, and to assist the state organised mobs in carrying out the genocide. The Sikhs were helpless and could not turn to the state for protection. In numerous cases their neighbours and other citizens, regardless of their religious beliefs, came out to help them and protect them from the murderous mobs.

Speakers also highlighted the fact that that when the state is the organizer of violence against the people, we cannot expect justice from this state and its institutions. They upheld the demand for fixing command responsibility. They also pointed to the horrific state-organised communal violence that shook North East Delhi in February this year, to re-iterate the fact that state organized communal violence and state terror remains the favoured weapon in the hands of the ruling class, to smash the unity of the people against the growing attacks on our livelihood and rights. We cannot afford to forget the lessons of November 1984, they said, and called upon the youth gathered at the meeting to take the struggle forward.

The spirit of unity pervading the meeting was captured by the slogan “An attack on one is an attack on all!” The meeting concluded with a salute to the unity of all the participants, steeled through years of struggle, and a call to strengthen this unity. It pledged to take forward the struggle against state organized communal violence and state terror, as part of our struggle for a new society that will guarantee prosperity and security for all.