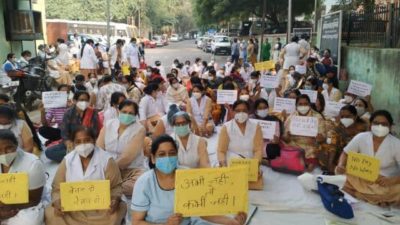 Earlier, doctors working in these North Delhi Municipal Corporation (North MCD)-run hospitals who had been agitating for 24 days for payment of their pending salaries called off their strike on 28th October on receiving their salary arrears of four months.

Even while releasing the salaries of the doctors, the North MCD did not release the pending salaries of the nurses and other para medical staff of the same hospitals. This forced the nursing staff to go on indefinite strike.  It is reported that the nurses and para medical staff have not been paid salaries since last four months, and the ward boys have not been paid since July.

Health workers of all the five hospitals under North MCD – Hindu Rao Hospital, Kasturba Gandhi Hospital, Maharishi Valmiki Institute of Infectious Diseases, Mrs Girdhari Lal Maternity Hospital and RBIPMT – have written multiple letters to the North MCD mayor demanding payment of their salaries. However, the authorities have not heeded their demands, forcing the workers to go on strike.

It has also been reported that teachers of the MCD schools of the North MCD have started protest actions demanding payment of pending salaries of the past four months.

Doctors, nurses and other health workers, school teachers and other  employees of the North and East MCD have been going on strike periodically since the last 5 years. Their demand has been for salary due to them for work done. Their salaries have been pending for months on end at any point of time. Sometimes, they have had to strike work four times within the period of one year. More than 1.5 lakh workers including doctors, nurses, paramedics, engineers, teachers and sanitation workers participated in the strike that took place from 27th January to 6th February. Every time their demand has been for the release of their salaries which they had not received for 3-4 months.

The doctors, nurses, sanitation workers, teachers and others employees of the North MCD are very angry with their employer. They do not have the means to take care of themselves and their families. All through the pandemic, the health workers have continued working even while they have not received their salaries. The out-patient services in the Municipal hospitals were opened up before most hospitals in Delhi did. The health workers ensured that none of the services they were mandated to deliver were disrupted. Even as they are striking work, they have tried to ensure that essential services are not affected.

How criminal is this state that it squeezes the life out of its employees and does not guarantee them their agreed upon wages? The Hospital Employees Union has pointed out that many of the nurses, who have been working tirelessly without any holidays, and their family members have been infected with COVID-19 and they are in dire situation of having to run here and there to arrange funds for treatment.

Denial of salary payment for work done by an employee according to the terms of his or her contract is a violation of a basic human right. And yet, thousands of hard working health workers, sanitation workers and teachers have been denied this right and this system gives no recourse to these workers to realise their claim.

The Delhi High Court has been hearing several petitions on the matter from teachers, doctors, nurses, other sections of MCD employees as well as from the public. The High Court has reprimanded the North MCD and the Delhi state government for this neglect. On hearing North MCD’s plea of lack of funds, the court asked both authorities to provide the detailed status of funds. The employees of the North MCD who have filed the petitions and have been striking work from time to time are still unaware of whether or not this status of funds has been submitted. What they know is that till date none of the concerned authorities has put forward any proposal for resolution of the critical issue. There is no time-bound action being demanded by the High Court.

When some petitioners approached the Supreme Court, it declared that it cannot hear the petition because the proceedings are underway in the High Court. It directed the petitioners to the HC. This leaves the employees high and dry while the two parties ruling the state and in charge of the municipal corporation are indulging in a blame game.

There are more than 350 dispensaries and 44 hospitals and more than 1500 schools managed by the three MCDs together. All workers across the three MCDs must unite and organise for a relentless fight for their demands. The demand must be for immediate payment of all salary arrears and regular payment of salaries hereafter. The just demands of the nurses, doctors and other employees of the MCD’s deserve the support of all working people.