Since the afternoon of June 4, 2011, thousands of workers of the Maruti Suzuki plant at Manesar have gone on strike, bringing to a halt all production in this factory.

The strike has been called by the workers to assert their right to form their own Union, in place of the management union that currently exists. It has been called to demand improvement in the terrible working conditions, improved wages, as well as other just demands. All the workers of the company —permanent, casual, as well as apprentices are united in the struggle. 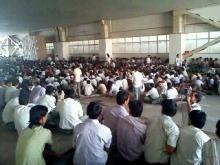 The management has suspended 11 workers by June 7, the 4th day of the strike. To prevent the workers from organizing hartals and protests at the gate, the management has taken the fascist step of locking up workers in the park inside the gate. The striking workers inside the plant have been deprived of food, water, electricity as well as sanitary facilities. The Company has set bouncers with instructions to break the hands and legs of anyone standing near the gate to extend solidarity with the workers. 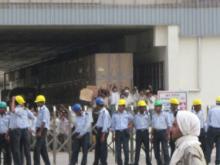 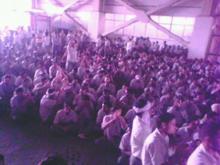 The last strike in Maruti Suzuki was between November 2000 and January 2001. In the intervening period, the management has intensified its attacks on workers, using the services of its union. The incentives that are supposed to be given to workers for meeting production targets are cut under one excuse or the other.  If a reliever does not come, a worker is forced to work a 16 hour shift. Those workers who refuse to do over time are abused and insulted.

About 1200 cars – including SX 4, Dzire Sedans, Swift and A-Star hatchbacks – are produced in this Manesar plant daily. The strike has brought all production to a halt. The workers are unfazed by the savage attacks of the management, including the suspensions. They are determined to continue their struggle until their union is recognized, all suspensions are revoked, and their other demands are discussed.

The Communist Ghadar Party of India fully supports this just struggle of the workers of Maruti Suzuki. The right to form a union is the right of workers, and the management has no right to deprive workers of this right. The management is terming the strike "illegal", but the right to strike is a just right. It is the management that is using strong arm tactics to attack the rights of workers and prevent them from forming their own union. This is the situation in the entire Manesar-Gurgaon belt, indeed all across the country. Therefore, as in the past, it is the responsibility of the workers of the Manesar – Gurgaon belt, as well as of the rest of the country to come forward and militantly support the just struggle of the Maruti Suzuki workers.