The meeting was organised by the Lok Raj Sangathan Nohar Committee.

The meeting was organised by the Lok Raj Sangathan Nohar Committee.

Comrade Prakash Rao, Spokesperson of the Communist Ghadar Party of India, and Secretary of the Lok Raj Sangathan, gave the main speech at the meeting.

Paying homage to Shaheed Bhagat Singh, the speakers all pointed out that the dream of the martyrs who fought for freedom from all forms of exploitation, has not been realised. The struggle continues today. Speakers contrasted the terrible eploitation of the workers and peasants with the conditions of the biggest capitalists, who have amassed immense wealth and become world class players. Speakers pointed out that the economic and political system in place has enabled this to happen, and a fundamental transformation is required. The present party system of governance is designed to enable the tata's, ambanis, and other capitalists to rule and to keep the people out of power. This needs to be changed. Various speakers pointed out that what is needed is the rule of workers and peasants, or Lok Raj. 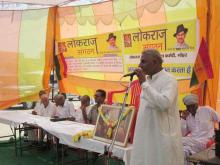 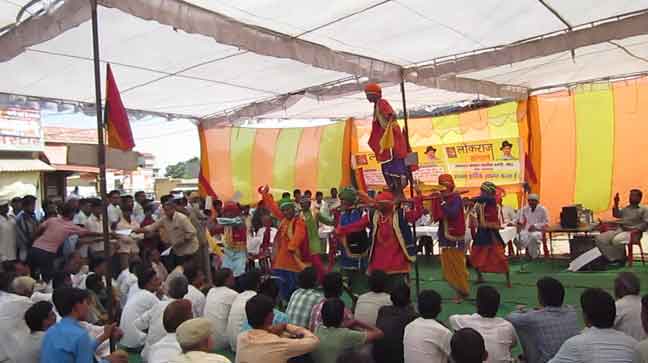 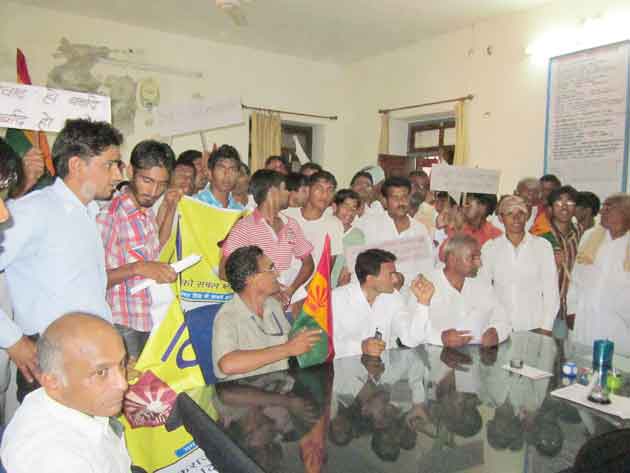 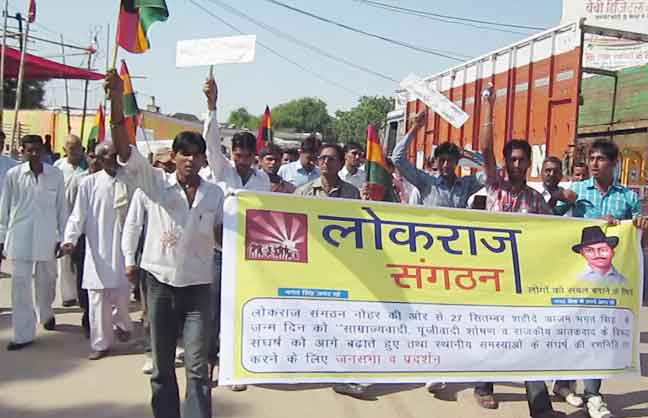 Comrade Hanuman Prasad Sharma gave an inspiring speech, exposing the machinations of the ruling class, and calling upon the working masses and political activists not to get caught in the diversions of the ruling class. We must not go behind individuals as messiahs, but build the Lok Raj Sangathan as the organisation of the people through which people will come to power and exercise political power. Following behind this or  that party of the ruling class, or this or that individual or gorup of individuals, is not going to lead to power in the hands of the people. The thesis that corruption or any other problem facing the people will be sorted out by replacing "bad individuals" with "good individuals" is to divert from the issue that the fundamental problem is the political and economic system that exists. Therefore, while we actively fight against coruption, we do so with the perspective that its real solution is to replace the present party system of rule suitable for the exploiters, with Lok Raj or the rule of workers and peasants.

Comrade Santosh Kumar spoke passionately about the need for the workers, peasants and revolutionary youth to study Marxism Leninism and use it as a guide to action, in solving the problems of the country. At a very young age, while in jail, Shaheed Bhagat Singh came to recognise the importance of this, and began his study of this science through which the working class can get rid of all forms of exploitation and oppression. Without the light provided by this revolutionary science, the workers, peasants and revolutionary intelligenstsia will not be able to defeat the machinations of the exploiters, native and foreign, and establish a society free from all forms of exploitation.

Comrade Prakash Rao dwelt in his address on the national and international situation. In particular  he pointed out the grave dangers to peace as a consequence of Anglo American imperialism's war mongering strategy to dominate the whole world. Anglo American imperialism is the fountain head of terrorism world wide, and in turn it is using 'war against terrorism", "humanitarian assistance" and other such slogans to advance its aims. Various countries and governments were opposing the US imperialists, including Iran. Today pakistan is under grave threat from the US, and the Pakistani people need the sympathy and suppoprt of the Indian people in the common struggle against anglo American imperialist agggression. It is shameful that the Manmohan Singh Government is collaborating with the US imperialists against the people of Afghanistan and Pakistan and refusing to oppose the dangerous course being pursued by the Anglo American imperialists. He called for great vigilance as a dangerous situation was developing in our region as well as the world, and the need is for us to actively forge anti imperialist unity of our people, and of the peoples of Asia and the world.

The meeting approved a memorandum to be submitted to the Chief Minister demanding immediate action of the demands raised in the memorandum.