The Finance Minister of the UPA government, Shri.P. Chidambaram, while presenting the 2013-14 budget on 28thFebruary said, “Faced with a huge fiscal deficit, I had no choice but to rationalise expenditure. We took a dose of bitter medicine.”

The Finance Minister of the UPA government, Shri.P. Chidambaram, while presenting the 2013-14 budget on 28thFebruary said, “Faced with a huge fiscal deficit, I had no choice but to rationalise expenditure. We took a dose of bitter medicine.” 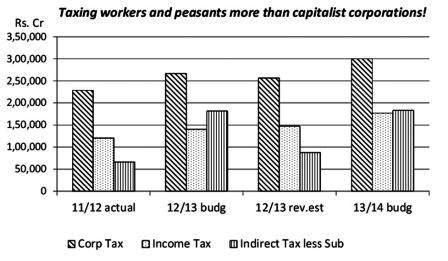 Workers, peasants and all working people and their dependents cannot afford to forget that this same government sang a different tune when the global crisis first broke out in 2008. India Inc. sang in chorus that the government must implement a huge “fiscal stimulus”, even if it means a larger fiscal deficit. At that time, the big capitalist corporations, banks and other money grabbing institutions were keen that the central state increases its expenditure to protect capitalist profits. At the present time, these very same profiteering interests want the government to restrict its expenditure and its borrowing so that banks will lend to capitalists at lower interest rates.

The Government of India and the capitalist class it represents keep changing the tune to suit their interests. What remains unchanged is the dictate of the economic interests of a tiny minority in society. Both when huge public debt is incurred and when essential expenditures are cut in name of fiscal responsibility, it is the working class and toiling majority of people who bear the burden.

Chidambaram’s bitter medicine includes a whopping increase in service tax collections. It includes repeated hikes in the prices of petrol, diesel and cooking gas, in the name of cutting petroleum subsidy.

Additional extraction through indirect taxes and reduction in subsidies together amount to Rs. 95,368 crore.  Personal income taxes on those earning salaries is estimated to fetch Rs. 29,800 more than in 2012-13. Together they amount to over Rs. 125,000 crore of additional extraction as compared to the previous year. 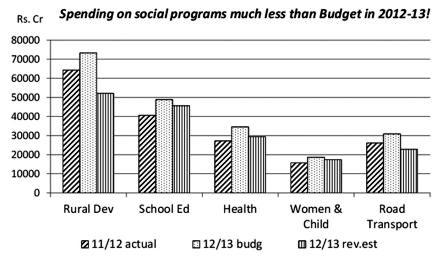 Claiming that he has “no choice”, the Finance Minister is announcing massive doses of bitter medicine for the working class and people at large, in the form of taxes on salaried incomes plus tax on every good or service that workers and peasants purchase in the market.

Indirect taxation means taxation on consumers. Indirect taxes on commodities of mass consumption are a tax on the workers and peasants and working people, who constitute the majority of the people. They have to cut their consumption and fight for higher wages or remunerative prices for their produce.

The budget estimates corporate taxes to rise by 17% in 2013-14, lower than the targeted rise of 20% in personal income taxes and 36% in service tax receipts. Despite all the pre-budget noise about taxing the rich, the FM announced only a 10% surcharge on the tax payable by the wealthy; i.e. individuals with an annual income of over Rs.1 crore.

The Finance Minister was very quick to clarify any doubts that his speech may have caused in investors on the matter of tax residency certificates (TRC). He clarified the very next day that the Indian tax authority will accept a tax residency certificate (TRC) as sufficient proof that a company is resident in Mauritius and will be eligible for benefits under the tax treaty India has with the island nation. 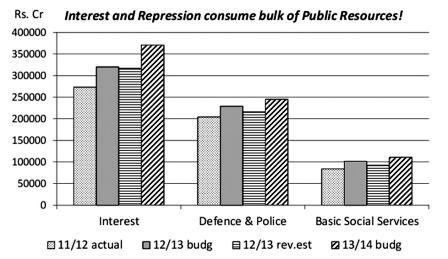 This was done to assuage any concerns on the part of those capitalists who use tax havens like Mauritius to park their ill-gotten wealth and channel their investments in the share markets, real estate, election financing, etc. Their main operations in Mauritius are to use it as a channel for their funds but they obtain a TRC from the Mauritius government on the claim that they are residents, so as to gain the tax advantage available to residents of Mauritius!

The Finance Minister packed his budget speech with rhetoric and appeals to the women, youth and poor of India. He claimed that his government stood “in solidarity with our girl children and women” and pledged “to do everything possible to empower them and to keep them safe and secure”. Chidambaram has announced the setting up of a “Nirbhaya” Fund with a corpus of Rs. 1000 crore, to be used “to make the country safer for women” The safety and security of women are not threatened by lack of money but by the capitalist system that cannot provide for the well-being of the working people. His next offer to women was the creation of an all-women bank. There are many banks and Micro-finance institutions in the country which have already trapped women and their families into debts that they have no means to escape from.

He promised that his government will work “to create opportunities for our youth to acquire education and skills that will get them decent jobs or self-employment that will bring them adequate incomes that will enable them to live with their families in a safe and secure environment.”

This is a criminal attempt to divert from the problems being experienced by the youth – they are faced with unaffordable education and training and severe unemployment.

Society is in need of doctors, teachers, engineers and other skilled human resources to address the needs of the working population and such a large youth force that we have has tremendous potential to fulfill these needs.This can happen only if the government will invest in good quality education for all, provide appropriate training and ensure that the aspirations of the youth and society’s requirements are harmonised. But in this capitalist system, provision of education and training is limited to suit the needs of thecapitalist class, and not the whole of society. The interests of the capitalists, Indian and foreign, are placed as the highest priority. With such an orientation,only a minority of the youth have access to quality education, training and job opportunities commensurate with their skills; the rest are left to take up jobs that do not require much skills or jobs that have no relation to their education and training or remain unemployed. So the skill training being promised by the Finance Minister is a fraud that does not at all address the issue of the vast masses of youth. What the Finance Minister is telling the youth is that they must be satisfied with the possibility of being wage slaves for the capitalists and imperialists.

“Aapka paisa aapke haath” (your money in your hands) is the slogan the Finance Minister gave to the poor! The Direct Benefit Transfer scheme which is being touted as yet another “magic” scheme that will lift people out of poverty is simply a difference in the manner in which money will be transferred to the beneficiaries of scholarships, pensions, MGNREGA and other schemes. The money will now be credited directly to their bank accounts. This willneither increase the scope of the schemes nor their benefits. It is being claimed that direct transfers to bank accounts will cut down corruption, but the experience of our people shows that corruption is an inherent part of this capitalist system in place in our country. The rulers cannot continue in power without their system of handouts and corruption. Now there will be increased corruption in opening and operating of bank accounts for the toiling people and youth!

The Finance Minister claimed in his speech, “A country’s most important resource is its people” and that the UPA does not believe in a model that “leaves behind women, the scheduled castes, the scheduled tribes, the minorities, and some backward classes” However, the figures he presented in the form of Revised Estimates for 2012-13 told an entirely different tale. Last year’s record shows that Chidambaram’s allocations for the coming year cannot be trusted. Rural Development, considered to be a special focus area of the UPA Government and of Sonia Gandhi, was allocated Rs. 73,222 crore but only Rs. 52,045 crore is estimated to have been spent in 2012-13. That is even less than the Rs. 64,263 crore that was spent in 2011-12. Now Chidambaram has raised the budget allocation for 2013-14 to Rs. 74,478 crore, without any explanation as to why actual spending fell so short of a similar target in the previous year.

Gross tax collections by the Central Government has been projected to increase from Rs. 10.38 lakh crore in 2012-13 to Rs. 12.36 lakh crore in 2013-14. This is equivalent to a 19% increase, which is high given that the economy has slowed down to 5% or 6%, and wholesale price inflation is projected at around 9%. The Finance Minister has based his budget estimates on an over-optimistic revenue projection. What this means is that budget allocations for different programs are likely to be cut during the course of the year.

Workers and peasants cannot agree that there is “no choice”!

Finance Minister Chidambaram claimed that he had no choice except to deliver bitter medicine to the working people. This is the same old worn out tune of all the followers of the liberalisation and privatisation program, that there is allegedly no alternative.

Once payments to money lending institutions and payments to arms dealers are considered top priority and allocated the lion’s share of public resources, it is easy for Mr. Chidambaram to claim that he has no space left except for some marginal sops.

The issue, however, is to halt the loot of public money by money lenders, arms dealers and other parasitic elements in society.There IS an alternative! That is the alternative of reorienting the economy and state policy towards the goal of ensuring prosperity and protection for all. With this goal, the working class and toiling majority of people must unite and press the Central Government for the following immediate demands:

Suspend all interest payments to banks and other financial institutions!

Cut back on arms and armament spending!

Deploy monies to fulfillthe needs of all!

Reduce indirect taxation on commodities of mass consumption to bring down prices!