Statement of the Central Committee of Communist Ghadar Party of India, 21st May, 2013

Elections to the 224-member Karnataka Assembly, held on 5th May, witnessed 71% voter turnout compared to 65% in 2008.  It has resulted in an “absolute majority” for the Congress Party, which will now form the government on its own, replacing the BJP.

Statement of the Central Committee of Communist Ghadar Party of India, 21st May, 2013

Elections to the 224-member Karnataka Assembly, held on 5th May, witnessed 71% voter turnout compared to 65% in 2008.  It has resulted in an “absolute majority” for the Congress Party, which will now form the government on its own, replacing the BJP.

While it is called an absolute majority, a close look at the result shows that only 26.1% of all eligible voters cast their vote for the Congress Party, while an even larger share, 28.7%, did not vote at all.  The incumbent BJP received votes from 14.3% of the electorate, down from 22% in 2008.  Janata Dal (Secular) obtained 14.3% support, equal to that of BJP; and KJP, the party formed by former Chief Minister Yedyurappa who split from BJP, received the support of 7%. 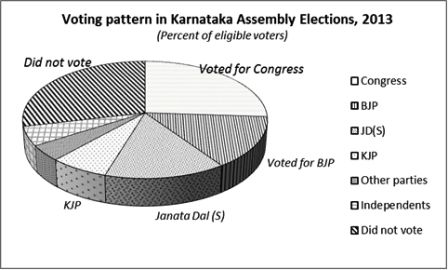 CPI (M) obtained 0.2% of the total votes cast.  It came second in one constituency and third in another.  Candidates of CPI came fourth in Mudigare and fifth in Bellary city.

Social Democratic Party of India (SDPI), formed in 2009, occupied second place in Narasimharaja constituency of Mysore, stood third in five constituencies and fourth in nine constituencies.  It campaigned on the platform of guaranteeing security for religious minorities, mobilising support from Muslims who had voted for Congress and JD(S) in the past and now feel betrayed by both. Loksatta Party, which originated in Andhra Pradesh and is in its nascent stage in Karnataka, fielded 24 candidates, of which a few came in third and fourth positions.

Who will benefit from this result and who will suffer?

The result has been received with joy by the big capitalists of our country, who have invested a lot of money to ensure a Congress Party victory in this election.  It has also been welcomed by those sections of propertied families of Karnataka who contributed to the Congress campaign and who now expect to reap handsome returns.

The capitalist class, by its very nature, is divided into rival factions and parties that fight one another for control over the executive power.  This is the nature of the Indian big bourgeoisie, which is split into the Congress and BJP factions.  It is also the nature of the regional bourgeoisie of Karnataka, divided into four parties at this time – Congress, BJP, KJP and JD(S).  The rival capitalist factions woo various sections of peasants and other middle strata by manipulating caste and religious identities.

In the existing system, the capitalist faction that gets to form the Cabinet expands its wealth at a faster rate than its rivals whose parties sit in the opposition.  The ruling camp reaps its rewards while those who sit in the opposition scream about corruption, expose scandals and wait for their turn.  The exposure of the mining scam in Karnataka, which led to the split in the BJP, was itself a result of the acute factional rivalry among capitalist groups.

Continued pursuit of the capitalist-imperialist agenda of globalisation through liberalisation and privatisation means a further continuation of extremely uneven and imbalanced development within Karnataka.  Overcrowded and globalised Bangalore will continue to experience chaotic growth led by service exports while vast regions of Karnataka remain under-developed.  The crisis of agriculture will deepen, as the capitalist monopolies extend their tentacles through contract farming and other forms of bondage of peasant producers to monopoly capitalist supply chains.  Workers in large-scale industries and modern services will face continued attacks on their rights, including their right to form unions of their choice and their right to strike.

Who decides in this democracy?

The impression created in the media is that the people of Karnataka have decided that the Congress Party will rule the state for the next five years.  This is a distortion of reality.  The truth is that a minority class of exploiters decided to back the Congress party to power in Karnataka at this time.  They invested massive amounts of money to ensure this result, knowing that the split in the BJP will make it possible to secure a Congress Party victory.

The role of money power is reported to have reached an unprecedented level in these elections, in spite of the limits prescribed by the Election Commission on maximum expenditure per candidate.  Such limits only refer to spending by the candidates themselves, while excluding the enormous amounts spent by the parties, with the Congress Party far ahead of all others.

Money power was used to secure the support of various local community and caste leaders, and to mount the loudest and most visible propaganda campaign for the Congress Party. The “first-past-the-post” rule was effectively used by the big bourgeoisie to achieve the result it wanted.  With a mere 1.8 percentage point increase in vote share the Congress Party managed to increase its seat share by 18 percentage points, from 36% to 54%.

While the Constitution of India gives the impression that the people are the decision-makers in this democracy, the truth is that the majority of people are powerless. Every eligible voter only gets a fleeting semblance of power, of being “raja for a day”.  Once the vote is cast, that impression has gone, and the toiling people realise how powerless they are in this democracy.  Elections are a process through which all power passes into the hands of the party or coalition of parties whose candidates were “first-past-the post” in more than 50% of the constituencies.

The working class, peasantry and other sections of the middle strata are permitted to form their parties and contest in elections, but they face a highly unequal contest.   In addition to the extremely skewed distribution of money power, the Representation of People’s Act and electoral rules discriminate against new and small parties as well as non-party candidates.  A handful of “recognised parties” receive numerous privileges and state support, including permanent election symbols and free TV coverage.

In spite of all the disadvantages and the unequal contest, several candidates of unrecognised and new parties have made advances in many constituencies in Karnataka.  This is a sign that there is a trend among the oppressed classes to challenge the domination of the established capitalist parties.  This trend is growing and is bound to grow further.  Communists need to lead the working class and capture this space.

Part of the reason that young and educated workers in Karnataka are not drawn towards the CPI(M) or CPI is the past history of these parties, especially their history of compromising with and supporting the Congress Party.  Another factor is the sectarian approach of CPI(M), which is willing to unite with the CPI and a couple of other parties, while it refuses to seek political unity or even electoral understanding with other parties of the working class or of the middle strata.

What the modern working class is looking for is a political party that leads the toiling majority of people to come to power, by ushering in a modern system of democracy that vests sovereignty in the people.  Such a party will not aim to capture the existing power for itself, but to create a new political power for the people.  It will fight to end the domination of political parties over candidate selection.  It will fight for the right of the working people to select candidates before election, their right to initiate legislation and to recall their elected representative at any time.

Communist Ghadar Party works with the aim of enabling the working class to lead the majority of peasants and other oppressed masses in the struggle to establish a new political power, a system of Lok Raj.  We are committed to the aim of restoring the unity of communists in the course of this struggle.  We believe that the unity of communists can be restored by waging a relentless struggle against the twin diseases of class conciliation and sectarianism.  We believe that a united communist movement can and will attract all those who are disgusted with the existing system and seeking to end their powerless condition.

Communists must approach the electoral arena as one of the numerous arenas of the class struggle to overthrow capitalist rule and open the path to socialism.  On the contrary, if a working class party approaches electoral battles with the sole aim of getting control of the existing power, in competition with the Congress, BJP and other capitalist parties, it means that this party has conciliated with capitalist rule.  To justify their class conciliation, such parties spread illusions about the existing system of democracy, hiding the fact that it is a capitalist democracy.

At the heart of the political crisis at the present time is the need to empower the people.  This is an issue that interests communists as well as numerous other political forces.  Communists must lead the effort to politically unite all such forces, irrespective of their ideological beliefs.  A major roadblock to such efforts is the sectarianism of those parties which give ideological reasons for not uniting with various parties and non-party candidates of the toiling and oppressed majority.

As we look forward to the next round of state elections and the approaching Lok Sabha election, we need to be clear on the lessons of past experience, including the lessons from the just concluded Karnataka election.

Communist Ghadar Party calls on all its members and activists to escalate the work of building political unity around the aim of people’s empowerment, and to escalate the struggle to restore the unity of communists by defeating all forms of class conciliation and sectarianism.