Even as the Abe government of Japan relentlessly marches ahead on the course of militarisation, the oppositon of the people of Japan to this course is also intensifying.

Even as the Abe government of Japan relentlessly marches ahead on the course of militarisation, the oppositon of the people of Japan to this course is also intensifying.

Massive protests have been taking place against militarisation in Tokyo, Osaka and many other towns accross the country. On August 30, 2015, over 1,20,000 protestors surrounded the Japanese Parliament as part of these protests.

Organisations and people in Japan are protesting not only against the most recent attempt by the Abe government to make Japanese troops participate directly in aggressive military campaigns abroad, but also to the continued existance of several US military bases in Japan. 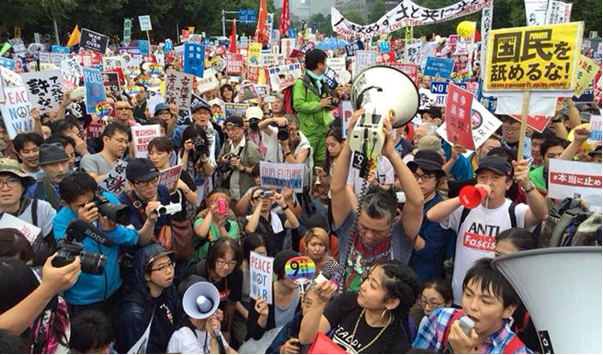 70 years ago, Japanese militarism was defeated at the end of the Second World War through an epic struggle of the peoples of Asia and the world. At the end of this war, Japan lay in ruins. Its cities had been carpet bombed by US forces. The US had dropped nuclear bombs over Hiroshima and Nagasaki resulting in unimaginable death and destruction. US military forces occupied Japan for seven long years, till April 1952. Even after that, US retains military bases in Japan against the will of the Japanese people, who have never stopped protesting against these bases. While Japan emerged from the ashes of the war as a major economic power, it remains tied militarily to the US.
The post war Constitution of Japan had measures incorporated in them to bar Japan from agains becoming a militarist power that threatened other peoples. Article 9 of the Constitution forbade the deployment of Japanese personal in combat operations outside the territory of Japan. This was a result both of the pressure from the Japanese people, as well as the peoples of Asia who had suffered immensely as a result of the war. For this reason, the Japanese Armed Forces are actually called Self Defence forces.

Ever since the Abe government came to power, it has been pursuing the course of aggressive militarisation, with the approval of the US. The US wants Japan to play a more active role in the wars it has launched in Asia, under its leadership. Furthermore, it wants active Japanese military involvement in the enciclement of China, and in any future wars in this region. The militarisation of Japan is dovetailed into the “pivot towards Asia” policy of the US. The Abe government has taken up the process of amending the constitution to enable it to deploy its armed forces outside Japan. For this, it has introduced two bills in parliament.

The people of Japan have suffered immensely as a result of Japanese militarism. Milllions of Japanese soldiers and civilians were killed during the Second World War. They do not want to see a militarised Japan ever again. The organisations opposing these Bills have issued a joint statement in which they state that they were strongly opposed to the situation in which the people of the Asia Pacific region could once again be in the relationship of killing or being killed as a result of Japanese war actions, or that the region could once again experience the tragic disaster of war. They stated that they were also strongly against Japan’s participation in war leading to Japan contributing to bloodshed in regions of the Middle East, Africa and others which suffer through the scourge of war. 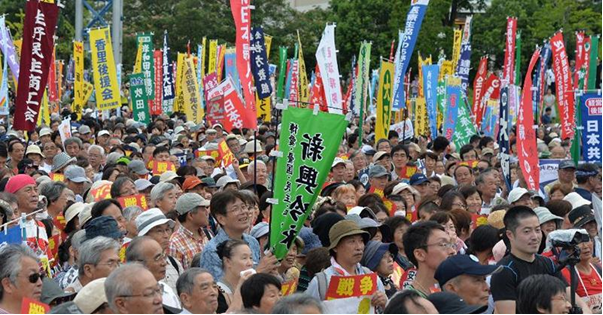