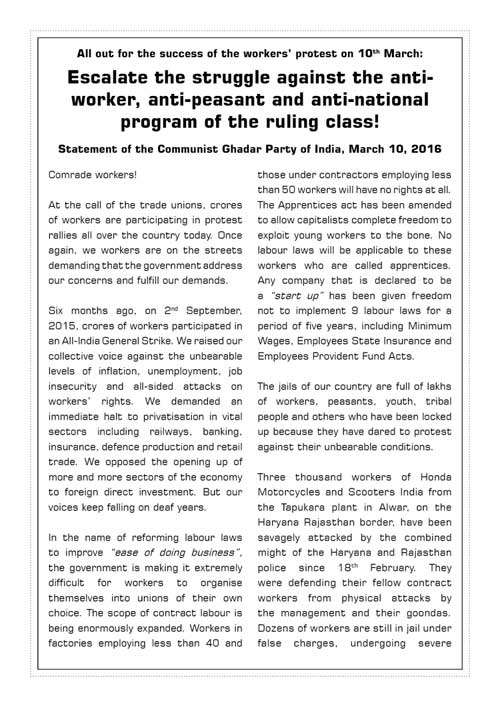 Escalate the struggle against the anti-worker, anti-peasant and anti-national program of the ruling class!

Statement of the Communist Ghadar Party of India, March 10, 2016

At the call of the trade unions, crores of workers are participating in protest rallies all over the country today. Once again, we workers are on the streets demanding that the government address our concerns and fulfill our demands.

Six months ago, on 2nd September, 2015, crores of workers participated in an All-India General Strike.  We raised our collective voice against the unbearable levels of inflation, unemployment, job insecurity and all-sided attacks on workers’ rights. We demanded an immediate halt to privatisation in vital sectors including railways, banking, insurance, defence production and retail trade.  We opposed the opening up of more and more sectors of the economy to foreign direct investment.  But our voices keep falling on deaf years.

Escalate the struggle against the anti-worker, anti-peasant and anti-national program of the ruling class!

Statement of the Communist Ghadar Party of India, March 10, 2016

At the call of the trade unions, crores of workers are participating in protest rallies all over the country today. Once again, we workers are on the streets demanding that the government address our concerns and fulfill our demands.

Six months ago, on 2nd September, 2015, crores of workers participated in an All-India General Strike.  We raised our collective voice against the unbearable levels of inflation, unemployment, job insecurity and all-sided attacks on workers’ rights. We demanded an immediate halt to privatisation in vital sectors including railways, banking, insurance, defence production and retail trade.  We opposed the opening up of more and more sectors of the economy to foreign direct investment.  But our voices keep falling on deaf years.

In the name of reforming labour laws to improve “ease of doing business”, the government is making it extremely difficult for workers to organise themselves into unions of their own choice.  The scope of contract labour is being enormously expanded.  Workers in factories employing less than 40 and those under contractors employing less than 50 workers will have no rights at all. The Apprentices act has been amended to allow capitalists complete freedom to exploit young workers to the bone. No labour laws will be applicable to these workers who are called apprentices.  Any company that is declared to be a “start up” has been given freedom not to implement 9 labour laws for a period of five years, including Minimum Wages, Employees State Insurance and Employees Provident Fund Acts.

The jails of our country are full of lakhs of workers, peasants, youth, tribal people and others who have been locked up because they have dared to protest against their unbearable conditions.

Three thousand workers of Honda Motorcycles and Scooters India from the Tapukara plant in Alwar, on the Haryana Rajasthan border, have been savagely attacked by the combined might of the Haryana and Rajasthan police since 18th February. They were defending their fellow contract workers from physical attacks by the management and their goondas. Dozens of workers are still in jail under false charges, undergoing severe torture.  Eight trade union leaders in Pricol factory in Coimbatore, Tamilnadu, have been awarded a double life imprisonment for fighting for the rights of workers. Over 150 workers of Maruti Suzuki’s  Manesar plant were tortured and imprisoned for over two years, and 30 of them are still in jail facing harsh sentences. These are just some stark examples of the brutal treatment meted out to those who fight for their rights.

Prime Minister Modi has been travelling from one country to another to invite foreign capitalists to India under the  slogan  ‘Make in India’.  “Come one, come all, exploit our young workers to the bone, loot our natural resources  — our state will protect you and crush all opposition from the people!” — this is the message of the Modi government to the capitalists of the world!

Twenty five years ago, the big capitalists launched the program of globalisation through liberalisation and privatisation.  It is a program designed to fulfill the global imperialist aims of the biggest monopoly houses of the country, at the expense of the livelihood and rights of the toiling majority of people.  To facilitate rapid global expansion of Indian corporate houses, successive governments headed by the Congress and BJP have been opening up the country to the biggest multinational corporations of the world.  The livelihood and rights of workers, peasants and adivasis have been repeatedly attacked for the sake of guaranteeing maximum profits for Indian and global capitalist corporations.

The super-rich in our country have grown richer year after year.  According to recent estimates, there are roughly 1000 persons with individual wealth of more than Rs. 650 crore (US$ 100 million).  The richest 1% of the population has increased its share of ownership of India’s wealth from 37% in 2000 to 53% in 2015.  The share of the poorer 50% of the population shrank from 5.3% to 4.1% in the same period.  Thus, those whose toil creates wealth are growing poorer, while those who exploit and rob them are becoming enormously rich and still richer every year.

The program of enriching the super-rich has been accompanied by the all round escalation of state terrorism and enactrment of fascist laws, state organised communal massacres, periodic terrorist attacks on innocent people, and deliberate excacerbation of caste and other divisions in society.  Both the principal parties in Parliament have taken turns to implement this anti-social offensive of the ruling class.   They have painted particular communities as posing a threat to India and used that to justify committing the most monstrous crimes. Behind all this, has been the diabolical aim of the ruling class to divert and divide the people’s opposition and drown their struggles in blood.

In spite of the cunning and criminal tactics of the ruling class, workers all over the country are coming together in opposition to the program of the ruling class, cutting across differences in union and party affiliation.  We  need to  further strengthen the unity of our class and the unity of all the exploited and oppressed masses to halt the anti-national and anti social program of globalisation, privatisation and liberalisation.

It is the workers, peasants, women and youth of our country who fought and shed our blood for azaadi from British colonial rule.  However, it is a tiny minority of big capitalists and big landlords into whose hands power was transferred in 1947.  It is this class of persons who are acting against the interests of the entire country and branding anyone who opposes their rule as a desh drohi!

In colonial times, less than 50,000 Britishers ruled over 30 crore Indians.  Today, about 150 monopoly capitalist houses, at the head of about 2 lakh capitalists, rule over 125 crore Indians.

The big capitalists rule over the toiling majority of people by controlling the same bureaucracy, army, judiciary and other arms of the state apparatus that the British colonialists had built to enslave Indians.  They rule through a political process in which their trusted parties take turns to act as their management team, while reducing the vast majority of people to vote banks.  They deploy the same tactics of divide and rule as the British rulers did in the past.  They use the same colonial era laws including the Sedition Act to imprison and hang those who refuse to be slaves, just like the British did to Bhagat Singh, Rajguru, Sukhdev and countless other patriots.

Today, six students of Jawaharlal Nehru University stand charged with Sedition only because they declared their determination to fight for azaadi from capitalism, feudalism, caste discrimination and oppression of women.

It is the capitalist class, headed by the monopoly houses, which is acting against the interests of the nation.  It is responsible for wrecking the economy, impoverishing the masses of workers and peasants, denying the youth their future, and exacerbating divisions among the people on the basis of caste, religion, etc.

While claiming to be defending the unity and integrity of India, the ruling class is deepening all kinds of sectarian divisions to destroy the unity and solidarity among the people.  This provides a fertile ground for external powers to exploit.  It is precisely by accentuating and exploiting internal strife that US imperialism has carried out regime changes in its favour, broken up states and redrawn the political map of entire regions in Europe and Asia.  Thus, the program of the ruling class is threatening the very sovereignty of India.

Only we workers and peasants have the capability and the interest to save our country from the disastrous course along which the big capitalists are dragging our country.  As the most organised detachment of the toiling and exploited majority, the working class has an important and critical role to play.

India’s land and mineral wealth, forests, rivers and mountains all belong to the people of this country.  Tragically, the big capitalists have stolen what belongs to us. They are mercilessly exploiting and looting us in collusion with foreign capitalists.  They are maintaining their rule through the ballot and the bullet. The political system and process ensures that one or the other of the trusted parties  of the big bourgeoisie is entrusted with managing the government. State terrorism, and various means of divide and rule are deployed to prevent the workers and peasants, women and youth from uniting and fighting for what belongs to us.  How long can we tolerate this gross injustice?

In order to save India from the dangerous course on which it is headed, it is essential for the toiling majority of people, led by the working class, to take political power into their hands, from the hands of the 2 lakh capitalists headed by 150 monopoly houses.  We need to take back what belongs to us.  The means of large-scale production, which are today in the hands of a super-rich minority, must be taken over and placed under social control.  Only then is it possible to ensure that prosperity and security will be guaranteed for everyone.  Only then will the soldiers who are guarding our borders have the satisfaction that they are actually defending the rule of the workers and peasants, to whose families they belong.

Let us escalate the struggle to halt the privatisation and liberalisation program, and in defence of the rights of all our people.  Let us wage this struggle with the perspective of ushering in workers’ and peasants’ rule.  Let us unite around our own alternative program – for the democratic renewal of the political process and reorientation of the economy to provide for all!  Let us emerge as a united political force at the head of all the exploited and oppressed people!

Workers, peasants, women and youth – We constitute India!  We are her master!