March 23, 2016 was the 86th anniversary of the martyrdom of Shaheed Bhagat Singh, Rajguru and Sukhdev.

March 23, 2016 was the 86th anniversary of the martyrdom of Shaheed Bhagat Singh, Rajguru and Sukhdev. On this day, the Shaheed Bhagat Singh Disha Trust, Jan Sangharsh Manch Haryana, MNREGA Mazdoor Union, Nirmankarya  Mazdoor-mistri Union, Samtamoolak Mahila Sanghatan and SOSD jointly organised  a massive rally through the streets of Kurukshetra, Haryana, which culminated in a public meeting.  Thousands of working people, students and youth, and women participated with great enthusiasm in the rally and public meeting. 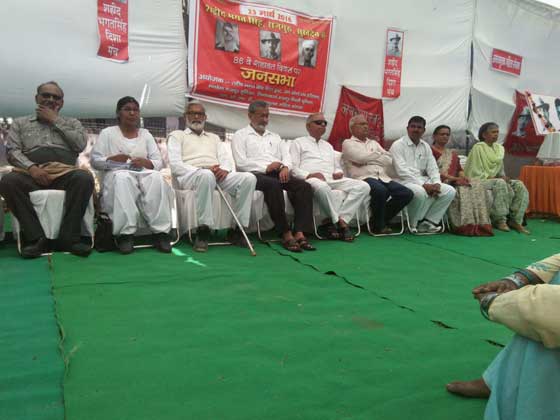 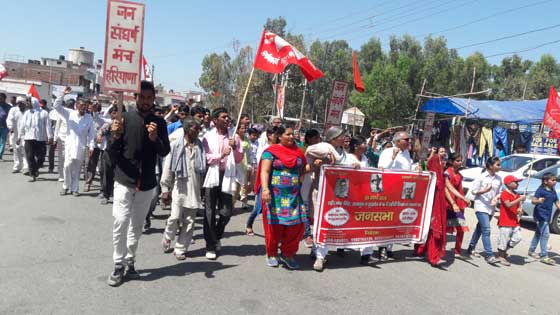 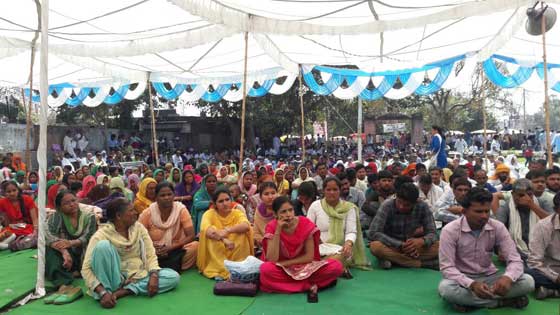 The Public meeting was presided over by the President of Jan Sangharsh Manch Haryana, Comrade Phool Singh Gautam. The convenor of the student organisation SOCD, Kavita Vidrohi, conducted the proceedings.

Comrade Shyam Sundar, the President of the Shaheed Bhagat Singh DIsha Trust, delivered the main speech at the public meeting. Comrade Shyam Sundar emphasised that the goal and vision of  Shaheed Bhagat SIngh and his comrades was not limited to obtaining freedom from British colonial rule. On the contrary, they had fought with the vision of overthrowing colonial rule and building  a socialist India free from all forms of exploitation and oppression of human beings by human beings.   He pointed out that the revolution that Shaheed Bhagat Singh dreamt of remains unfulfilled. Shaheed Bhagat SIngh upheld the program that as long as exploitation of human beings by human beings continued in our country, the struggle against this  would continue, even if the exploiters were Indian capitalists. Shaheed Bhagat SIngh was and will always remain a symbol of the struggle being waged by workers and peasants and working people for their  liberation from all forms of exploitation.  Comrade Shyam Sundar exhorted the youth and students, workers, and working people to hoist the revolutionary banner of “Inquilab Zindabad”  of Shaheed Bhagat Singh, firmly uphold the unity and solidarity of the people of the country, defeat the reactionary forces, and ensure the triumph of Inquilab.

Dr CD Sharma, leader of the Jan Sangharsh Manch, Haryana and founder of the Jan Chetna Manch emphasized that during the anti colonial struggle, it was the thinking and ideology upheld by Shaheed Bhagat Singh which stand out as scientific and truly revolutionary.  Shaheed Bhagat SIngh showed the way to organise the working people on a class basis, overcoming religious prejudices. Dr Sharma said that it was  Bhagat SIngh and his comrades who were instrumental in popularizing the ideas of Karl Marx  amongst the Indian people, through their steadfast commitment to these ideas,  during the anti colonial freedom struggle.

Comrade Phool Singh Gautam said at the present time, the attacks on women and on dalits was increasing. The ruling class is trying to smash the unity and solidarity of the people by exacerbating caste divisions.

Advocate Sudesh Kumari said that it is by spreading the teachings of Bhagat Singh to the broad masses of working people that we will succeed in giving a fitting reply to the communal forces.  She placed a resolution before the public meeting that demanded that the government will stick to the earlier decision to name the Chandigarh Airport after Shaheed e Azam Bhagat Singh. The Public meeting unanimously adopted this resolution.

Comrade Pal  Singh pointed out that the savage exploitation of labour was continuing unabated. In this capitalist system, all governments perform the job of being management teams of the capitalist class who work to defend the interests of the bourgeoisie. The working class needs to unite and intensify the struggle against their exploitation.

Convenor of the Samtamoolak Mahila Sangathan, Dr Sunita Tyagi said that working women are raising their powerful voices against exploitation, oppression and injustice. Whether it be tea plantations, or factories and workplaces, everywhere women are rising up against exploitation.  Today, the lives of women is a living hell, with women facing complete insecurity whether they are small children or elderly women.   The road to liberation of women lies in establishing a socialist society free of all forms of exploitation and oppression.

The Secretary of the Nirmankarya Mazdoor-Mistry Union, Comrade Bhagwat Swaroop  declared in his speech that road to the emancipation of the working class lay in workers becoming conscious and organised on a class basis and stepping up the struggle against capitalism.