Peasants in Punjab and Haryana gave the call for a country-wide ‘chakka jam’ agitation on November 5, against the three laws in the agriculture sector recently passed by the central government. These laws are in the service of the big capitalist monopolies in the agricultural sector and will lead to further devastation of the peasantry. The agitating peasants have demanded that they be withdrawn. The call for the protests had been given by the All India Kisan Sangharsh Coordination Committee, representing more than 200 peasant organisations. 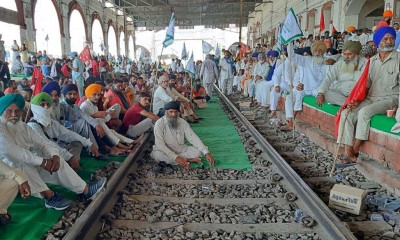 The peasant organisations were also protesting against the Central government’s move suspending goods trains in the state, which has severely affected supply of coal, fertiliser and other essential items, compounding the problems of the peasants.

In Patiala, the agitating peasants blocked major highways connecting the city to nearby areas. BKU (Dakaunda) held a protest at the Toll plaza Shutrana, Passiana, at Banda Bahadur chowk in Samana and the toll plaza near village Kalyan, Shambhu among other places.

In Ludhiana, all three main highways around the city – Ludhiana-Chandigarh Road at Kohara, Jalandhar- Ludhiana GT Road at Ladhowal Toll Plaza and Ludhiana-Firozepur National Highway at Chowki Mann (near Jagraon) were blocked by hundreds of protesting peasants.

More than 1,000 peasant activists, including women activists of BKU Ekta (Ugrahan) protested in front of the Silo of Adani group of industries at village Dagru and blocked the Moga-Ferozpur highway. The Kirti Kissan Union, Naujwan Bharat Sabha, BKU (Lakhowal), Aartia Association (Block Baghapurana) held a protest on the main chowk of Baghapurana town and blocked the Moga-Bathinda highway. MNREGA workers’ union, All India Anganwadi Workers/Helpers union and many other trade unions supported the peasants’ agitation in several districts. The Kul Hind Kissan Sabha (CPI), BKU (Kadian), BKU (Maan) staged a protest near Baba Gendi Raam at Dharamkot town and blocked Moga-Jalandhar highway. Similar protests blocking major roads were held in hundreds of places across the state, in which many workers’ organisations also joined in support of the peasants’ demands.

In Haryana, thousands of agitating peasants blocked National Highway-44 near Karnal’s Raipur Roran village in protest against the anti-peasant laws. Peasants from Karnal, Ambala, Kurukshetra, Yamunanagar and Panchkula participated in the protests.