May Day call of the Central Committee of Communist Ghadar Party of India, 29 April, 2017

On the occasion of May Day 2017, Communist Ghadar Party of India extends its revolutionary greetings to the workers of India and all countries who are courageously resisting the offensive of the capitalist class against their livelihood and rights.

May Day call of the Central Committee of Communist Ghadar Party of India, 29 April, 2017 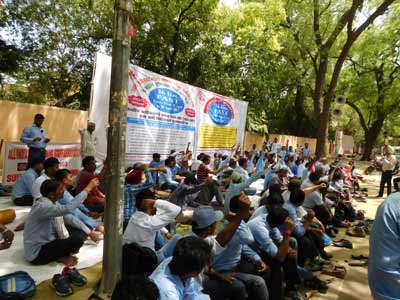 On the occasion of May Day 2017, Communist Ghadar Party of India extends its revolutionary greetings to the workers of India and all countries who are courageously resisting the offensive of the capitalist class against their livelihood and rights.

May Day is an important occasion to sum up the experience gained in the class struggle during the previous year and set a Line of March for the year ahead. We need to soberly assess the situation and decide on our course of action. The working class can only advance on the basis of its own agenda, one that workers themselves formulate, defend and fight for with passion and conviction.

In our country, the past 12 months have witnessed a visible growth in the degree of participation of workers in protest actions against privatisation, liberalisation and blatant attacks on labour rights. Several crores of workers took part in the General Strike last September.

The ruling capitalist class is relying on the speech making skills of Prime Minister Modi to present the anti-social agenda of enriching the corporate houses as being allegedly an agenda of fighting corruption and uplifting the poor. The Prime Minister is promising “big reforms” in the near future, which means further major attacks on the rights of workers and peasants. Anyone who questions or opposes this agenda is being branded as “anti-national” and treated as a criminal.

More and more workers are being convinced by their experience of the necessity for united mass actions. This is leading to growing unity among workers. However, this unity is continuously being wrecked by the divisive political machinations of the capitalist class.

Apart from inciting communal and caste divisions, the capitalist class uses the political process of multi-party representative democracy to constantly divide and divert workers and make them take sides in inter-capitalist rivalry.

The capitalist class is represented by multiple parties that fight among themselves for control over executive power. Workers are divided and lined up behind the different parties of the capitalist class. Every election — be it to parliament, state assemblies or to local bodies — is used by the ruling capitalist class to further divide workers. Workers are fed with the false notion that the main struggle is between these rival parties in parliament.

Life experience, including the recent case of Maruti workers, affirms the bitter truth that the courts and police forces consistently act in the service of the capitalist owners, and attack the rights of the workers. This has been true in the Maruti case both when Congress party was leading the central and Haryana governments, and now when it has been replaced by BJP in both places. This clearly shows that it is not just a particular party but the entire State machinery which is in the service of the capitalist class.

The capitalist class, headed by about 150 monopoly houses, sets the agenda and imposes its will, using the State to suppress those who dissent. It uses elections to sort out its internal contradictions and gain legitimacy for its rule. Capitalist monopolies use their immense money power and their control over the State and the media to ensure electoral victory for one or another of their trusted parties. The concentration of wealth and power has reached such a high level that “sweeping victories” are manufactured through various forms of rigging, old and new.

While electoral outcomes are determined by the big bourgeoisie, they are presented as the “people’s verdict”, so as to demoralise the working class. Thus, for instance, it is being propagated that the UP electoral outcome allegedly shows that the majority of working people want BJP rule.

The most harmful effect of the existing multi-party representative democracy is the illusion it fosters amongst workers that their fate and future is determined by which party is elected to be in charge of executive power. By this means, the ruling capitalist class keeps the working class securely chained to the present system — always seeking a “better alternative” within this system. When Congress Party rule became discredited, BJP was promoted as the “clean” alternative. When BJP rule becomes unbearable, Congress Party is promoted as the “secular” alternative. While one party replaces another periodically, what remains unchanged is the dictatorship of the capitalist class, headed by the monopoly houses. Conditions of workers and peasants go from bad to worse, as each government is more ferocious in attacking people’s rights.

What we need is an alternative to the existing system of parliamentary democracy, which is a form of capitalist dictatorship. We need to establish a system of proletarian democracy in which the will of the toiling majority prevails and not the will of an exploiting minority.

We need to establish a new modern Constitution that vests supreme decision-making power in the hands of the people. Political parties must not be permitted to keep people out of power. The role of political parties must be to organise to make sure that power remains with the people and is not usurped by any vested interest.

People of each electoral constituency must have a decisive say in the selection of candidates for election. Instead of handing over all power to elected representatives, people must delegate only a part. We must retain the right to demand a rendering of account from our elected representative and the right to recall him or her at any time. We must retain the right to initiate legislation. With political power in our hands, we the toiling majority can reorient the economy to fulfil human needs instead of being oriented to fulfil capitalist greed.

The capitalist class thinks that the draconian court verdict of life imprisonment awarded to 13 Maruti workers will “teach all workers a lesson”. However, it has resulted in bringing workers on the streets all over the country, demanding justice for the Maruti workers and for the entire working class.

An important task we face is to build and strengthen workers’ unity committees in factories and industrial areas. Such committees have already sprung up in many places. Workers from different sectors, leaders of different unions and communists owing allegiance to different parties are all coming together in defence of workers’ rights. Workers’ unity committees and councils are helping to provide collective leadership to the struggle of all workers of entire industrial belts.

The key to build and strengthen workers’ unity committees is the constant struggle in defence of the rights that belong to all workers. We workers have rights both as human beings and as wage workers. These include the right to a dignified human existence, the right to form unions of our choice, right to an 8-hour limit on the working day, right to rest and recreation, health care, pension, and social security.

While fighting in defence of the rights of workers, peasants and all the oppressed, we must oppose all illusions about an allegedly reformed and clean capitalism, about bourgeois parliamentary democracy and so-called alternatives within the existing system. There is only one real alternative, which is the revolutionary alternative.

We must wage the struggle in defence of our rights with the perspective of carrying out the Navnirman of India – that is, reconstitution of the State and reorientation of the economy to fulfil the needs of the working people and not the insatiable greed of monopoly capitalists.

Workers of all countries, Unite!