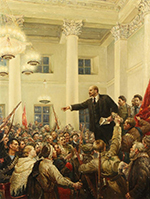 The supression of the Kornilov-led revolt clearly showed that the tide of revolution was rising. There ensued a period of bolshevistation. Factories, mills and military units held new elections and sent to the Soviets representatives of the Bolshevik Party in place of the Mensheviks and Socialist Revolutionaries.The Petrograd and Moscow Soviets went over to the Bolsheviks, forcing the resignation of the Mensheviks and Socialist Revolutionaries.

On November 7, Red Guards and revolutionary troops occupied the railway stations, post office, telegraph office, the Ministries and the State Bank. The Pre-parliament was dissolved. The cruiser Aurora trained its guns on the Winter Palace, and their thunder ushered in a new era, the era of the Great Socialist Revolution.

The supression of the Kornilov-led revolt clearly showed that the tide of revolution was rising. There ensued a period of bolshevistation. Factories, mills and military units held new elections and sent to the Soviets representatives of the Bolshevik Party in place of the Mensheviks and Socialist Revolutionaries.The Petrograd and Moscow Soviets went over to the Bolsheviks, forcing the resignation of the Mensheviks and Socialist Revolutionaries.

The Bolsheviks made intensive preparations for the convocation of the Second Congress of Soviets. They overcame the efforts of the Mensheviks and Socialist Revolutionaries to postpone the Congress.

Simultaneously, the Bolsheviks began intensive preparations for the uprising. Lenin declared that, having secured a majority in the Soviets of Workers’ and Soldiers’ Deputies in both the capitals—Moscow and Petrograd—the Bolsheviks could and should take the state power into their own hands.

“The Central Committee recognizes that the international position of the Russian revolution (the revolt in the German navy which is an extreme manifestation of the growth throughout Europe of the world Socialist revolution; the threat of conclusion of peace by the imperialists with the object of strangling the revolution in Russia) as well as its military position (the indubitable decision of the Russian bourgeoisie and Kerensky and Co. to surrender Petrograd to the Germans), and the fact that the proletarian party has gained a majority in the Soviets—all this, taken in conjunction with the peasant revolt and the swing of popular confidence towards our Party (the elections in Moscow), and, finally, the obvious preparations being made for a second Kornilov affair (the withdrawal of troops from Petrograd, the dispatch of Cossacks to Petrograd, the surrounding of Minsk by Cossacks, etc.) — all this places the armed uprising on the order of the day.

“Considering therefore that an armed uprising is inevitable, and that the time for it is fully ripe, the Central Committee instructs all Party organizations to be guided accordingly, and to discuss and decide all practical questions (the Congress of Soviets of the Northern Region, the withdrawal of troops from Petrograd, the action of our people in Moscow and Minsk, etc.) from this point of view.” (Lenin, Selected Works, Vol. VI, p. 303.)

The Central Committee of the Bolshevik Party sent its representatives to the different regions of the country and to work amongst the armed forces to organize the uprising.

A Revolutionary Military Committee of the Petrograd Soviet was set up. This body became the legally functioning headquarters of the uprising.

On October 29 the CC of the Bolshevik party elected a Party Centre, headed by Comrade Stalin, to direct the uprising. This Party Centre was the leading core of the Revolutionary Military Committee of the Petrograd Soviet and had practical direction of the whole uprising.

The news of the preparation of the uprising was leaked to the bourgeois media by Zinoviev and Kamenev. Forewarned by the traitors, the enemies of the revolution at once began to take measures to prevent the uprising and to destroy the directing staff of the revolution—the Bolshevik Party.

The Provisional Government called a secret meeting which decided upon measures for combating the Bolsheviks. The Smolny— the headquarters of the Bolshevik Central Committee—was to be attacked and occupied and the Bolshevik directing centre destroyed. For this purpose the government summoned to Petrograd troops in whose loyalty it believed.

The Bolsheviks sent commissars of the Revolutionary Military Committee to all revolutionary army units. Energetic preparations for action were made in the army units and in the mills and factories. Precise instructions were also issued to the warships Aurora and Zarya Svobody.

On November 6, the Provisional government ordered the suppression of the central organ of the Bolshevik Party, Rabochy Put (Workers’ Path), and dispatched armoured cars to its editorial premises and to the printing plant of the Bolsheviks.

On the night of November 6 Lenin arrived at the Smolny and assumed personal direction of the uprising. All that night revolutionary units of the army and detachments of the Red Guard kept arriving at the Smolny. The Bolsheviks directed them to the centre of the capital, to surround the Winter Palace, where the Provisional Government had entrenched itself.

On November 7, Red Guards and revolutionary troops occupied the railway stations, post office, telegraph office, the Ministries and the State Bank. The Pre-parliament was dissolved. The cruiser Aurora trained its guns on the Winter Palace, and their thunder ushered in a new era, the era of the Great Socialist Revolution.

On the night of November 7 the revolutionary workers, soldiers and sailors took the Winter Palace by storm and arrested the Provisional Government. The armed uprising in Petrograd had won.

On November 7 the Bolsheviks issued a manifesto “To the Citizens of Russia” announcing that the bourgeois Provisional Government had been deposed and that state power had passed into the hands of the Soviets.

The Second All-Russian Congress of Soviets opened in the Smolny at 10:45 p.m. on November 7, 1917, when the power in the capital had actually passed into the hands of the Petrograd Soviet.

“Backed by the will of the vast majority of the workers, soldiers and peasants, backed by the victorious uprising of the workers and the garrison which had taken place in Petrograd, the Congress takes the power into its own hands”—the proclamation of the Second Congress of Soviets read.

On the night of November 8, 1917, the Second Congress of Soviets adopted the Decree on Peace. The congress called upon the belligerent countries to conclude an immediate armistice for a period of not less than three months to permit negotiations for peace. The congress at the same time appealed to the class conscious workers of Britain, France and Germany to help “to bring to a successful conclusion the cause of peace, and at the same time the cause of the emancipation of the toiling and exploited masses of the population from all forms of slavery and all forms of exploitation.”

The same night, the Second Congress of Soviets adopted the Decree on Land, which proclaimed that “landlord ownership of land is abolished forthwith without compensation.” Private ownership of land was to be abolished forever and replaced by public, or state ownership of the land. The lands of the landlords, of the tsar’s family and of the monasteries were to be turned over to all the toilers for their free use. By this decree the peasantry received from the October Socialist Revolution over 400 million acres of land.

All mineral resources (oil, coal, ores, etc.), forests and waters became the property of the people.

The congress delegates dispersed to spread the news of the victory of the Soviets in Petrograd and to ensure the extension of the power of the Soviets to the whole country.

Not everywhere did power pass to the Soviets at once. The counter revolutionary forces in Moscow started an armed fight with the workers and soldiers to prevent power passing into the hands of the Moscow Soviet, before they were defeated. However, nothing could stop the march of the proletarian revolution. In the interval from November 1917 to February 1918 the Soviet revolution spread throughout the vast territory of the country at such a rapid rate that Lenin referred to it as a “triumphal march” of Soviet power.

The History of the Communist Party of Soviet Union (Bolsheviks) points out the chief reasons for the victory of the proletarian revolution in Russia.