Indian society is facing a crisis of massive proportions as a result of growing unemployment and underemployment.

The Narender Modi Government has been turning this truth on its head. It has deliberately tried to suppress statistical data which confirm this trend, On the other hand, it has repeatedly resorted to blatant lies to “prove” that it has actually been creating crores of jobs.

Indian society is facing a crisis of massive proportions as a result of growing unemployment and underemployment.

The Narender Modi Government has been turning this truth on its head. It has deliberately tried to suppress statistical data which confirm this trend, On the other hand, it has repeatedly resorted to blatant lies to “prove” that it has actually been creating crores of jobs.

According to data compiled by the Centre for Monitoring Indian Economy (CMIE), the unemployment rate was 7.2% in February 2019, the worst in 28 months. 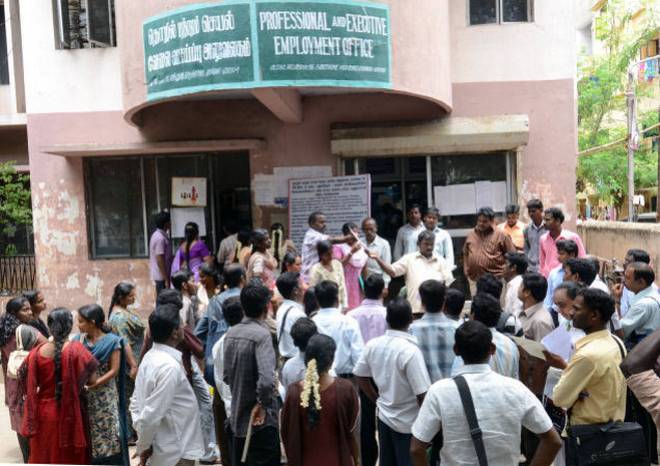 ​The labour force, the number of workers who are currently employed or actively seeking work, has decreased by 2.57 crores since September 2016. A major portion of this was due to a decrease in employed workers by 1.83 crores in the same period.

The decrease in labour force, taken together with the falling labour participation rate tell a tragic story. On one hand, crores of formerly employed workers have lost their jobs. On the other hand, less and less workers are actively seeking jobs, because there are no jobs to seek. The falling labour participation rate shows that more and more people feel hopeless about finding a job which will enable them to make two ends meet. In cities and in the villages, crores of youth are forced to idle away, as there are no jobs.

The majority of those who have work, are working in extremely exploitative conditions, as contract workers. It is common for workers to be forced to work for 12 hours a day, for wages far less than the statutory minimum wages, without any social security. Whenever the central or state government announces that it plans to fill a few hundred vacancies in clerical jobs, tens of thousands of graduates, post graduates, and even PhD’s apply for these jobs. This points to the hopelessness of these qualified youth of ever finding a better paying job in the private companies. Lakhs of youth spend years on end in vain, preparing for and writing one qualification examination after another, for a job in railways, or in some other department of the government.

The Central Government has been boasting about how the Indian economy has been growing at an extremely fast rate, faster than in the ten years of UPA rule. The Congress Party has been carrying out the opposite propaganda, that growth was “higher” during its rule. Both BJP and Congress are hiding the fact that the so called growth of the economy can at best be characterized as “jobless growth”. More jobs are being destroyed every year, than are being created.

The “growth” that has been taking place over the past few decades has resulted in the biggest Indian capitalist monopolies joining the ranks of the world’s richest. It has been achieved by intensifying the exploitation of workers, the robbery of peasantry, and the plunder of the natural resources of our country. It has been achieved by opening the doors of India ever more widely to exploitation and plunder by the American, European, Japanese and other multinational companies.

Since the program of globalization through liberalization and privatization was launched three decades ago, the real wages of workers in our country has fallen. More and more workers are forced to work on contractual basis, for long hours without any social security. The reserve army of unemployed is constantly used to force workers to accept the most oppressive conditions of work.

Workers do not have money to buy the goods in the market. There is a crisis of overproduction. The housing industry is a good example of this.

Crores of working people in cities and towns across our country have no homes of their own and are forced to live in miserable conditions. They seek affordable homes of their own. On the other hand, speculators invested in massive housing projects all over the country. In 2008, there was a crash in the housing industry, as there were no buyers for the new apartments. Thousands of half constructed housing complexes are visible all over the country. The homes that were being built were unaffordable for masses of workers. The construction industry went into crisis, from which it has yet to recover. This led to crisis in steel industry and cement industry. Lakhs of workers in these sectors lost their jobs. A similar phenomenon has taken place in other sectors of the economy as well.

Capitalism in its present stage of imperialism is extremely parasitic. Finance capital, from all over the world invests money wherever it can be assured maximum profits. It moves from one sector to another, one country to another, in its search for maximum profits, leaving a trail of destruction in its wake. Finance capital demands of every capitalist government that it is ensured the most favourable conditions for further accumulation of this capital. The Indian state has been doing so. What is produced and how much is not determined by what Indian society needs. It is not aimed at fulfilling the needs of workers, peasants, and other working people. It is determined by the greed of finance capital for maximum profits. As a result, the economy lurches from one crisis to another.

The extremely parasitic nature of capitalism in its present stage is revealed in the fact that the Indian state, as well as other capitalist states, boast of ‘growth” even as unemployment and underemployment is increasing, and more jobs are being destroyed then are being created.

The capitalist system is based on depriving the vast masses of people of the ownership of means of production. The ownership of the principle means of production is becoming increasingly concentrated in the hands of a tiny minority of the population. Peasants, artisans and other small producers are continuously being driven into ruin, joining the ranks of those who are forced to sell their labour power in order to survive. One section of workers is super exploited while another section is kept forcibly idle, without jobs. The existence of the reserve army of the unemployed enables the capitalists to drive down wages, and intensify the exploitation of workers.

The Narender Modi government claimed that by encouraging youth to set up Start Ups, new companies would come up which would provide employment to lakhs of workers. This is a fraud to fool the people. The majority of startups have collapsed. Similarly, the majority of youth who are supposed to have been “Skilled” in the Skill India program are still without jobs.

It is possible to ensure that all those who can work, are actually employed productively. To transform this possibility into a reality, the orientation of the economy needs to be changed from fulfilling capitalist greed to fulfilling human need. To ensure this, the working class, in alliance with the toiling peasantry, needs to take political power into its own hands. It must take over the principal means of production from the hands of capitalist monopolies and place them under social control. The Navnirman of India is the necessary condition to end the curse of growing unemployment in our society.