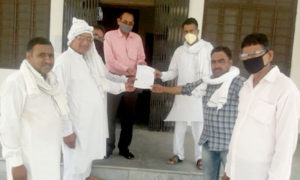 On June 9, the Ramgarh sub-Tehsil committee of the Lok Raj Sangathan organised a protest against the failure of the authorities to compensate farmers of the area for the failure of their crops, despite being covered by crop insurance. A delegation of farmers submitted a memorandum to the tehsil authority demanding immediate action by the government to ensure that the farmers of the region were compensated for the crop losses suffered by them.
This struggle is part of the struggle waged by farmers all across Rajasthan demanding compensation for the damages they have suffered in the Kharif crops. Ramgarh up-tehsil is part of Nohar Tehsil, in Hanumangarh District of Rajasthan.
The farmers of Nohar Tehsil have pointed out that the insurance company which has insured their crops, Agricultural Insurance Company of India, is not compensating them for the losses they have suffered. This despite the fact that the farmers have paid their premiums on time, and the state government has also carried out survey of the crops and estimated the damage suffered by farmers.
It must be noted that the farmers of this area have suffered great losses because of shortfall of rain, excessive hot weather, and thunderstorms. As a result, the Kharif crop was badly damaged. To make up for these losses, the farmers have been demanding their due compensation from the insurance company.
The delegation of armers announced that they will intensify their struggle if they are not immediately compensated for their losses. The delegation included amongst others Hanuman Prasad Sharma, Vice President, All India Council of the Lok Raj Sangathan, Om Prakash Sahu, former Sarpanch, Maniram Lakesar, Krishna Kumar Lokhwal, Om Prakash Sangar, Rohtas Solanki, Madal Lal Lakesar, Sudip Bazigar and Shokeen Khan.

Struggle to improve the railway station at Ramgarh

On June 9, the Lok Jan Samiti Ramgarh sent a letter by email to the Union Railway Minister asking the government to improve the facilities at the Ramgarh Halt station.
In its letter, the Lok Jan Samiti points out that the farmers of Ramgarh up Tehsil have been waging a long standing struggle for improvement of facilities at the Ramgarh Halt station. They have asked for raising the platfom level so that elderly, women, and children will not have difficulty boarding the trains. Further, they have asked for a booking office, a rest room for passengers and a foot over bridge. The Samiti has pointed out that hundreds of passengers use the Ramgarh Halt station regularly. At present, because there is no over bridge, people are forced to cross the railway lines, risking their lives. 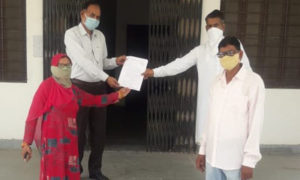 Farmers of Ramgarh up tehsil have been carrying on a long standing struggle to establish a farmers anaj mandi in Ramgarh village. In this connection, the farmers of the area have submitted numerous petitions to the authorites, as well as organised dharnas and demonstrations. Right in the midst of the Lock Downs organised by the government in view of the coronavirus pandemic, the farmers of the area organised a protest and submitted a memorandum requesting a mandi on April 22.
As a result of the persistant struggle of farmers of the area, the government has now set up a anaj mandi in the up tehsil. This is a big victory for farmers.
It must be noted that Ramgarh is a big village. The absence of a mandi in the up tehsil has created enormous hardships for the farmers of the area. In 1980, a farmers anaj mandi was established in the village. However, the blackmarketeers, middlemen, and corrupt authorities connived with each other to close down the anaj mandi. As a result, farmers had to take their produce 25 km distance to the Nohar anaj mandi, or become victims of middlemen.
Even after the reestablishment of the anaj mandi, farmers have been facing many problems. These include not buying the crops on time, and not paying the MSP.
The local committees of the Lok Jan Samiti and Lok Raj Sangathan have carried on vigorous struggle over the above issues. Memorandums have been submitted to the authorities. Finally, the struggle of the farmers resulted in victory, and their crops are being purchased in this mandi at the MSP.
The struggle was led amongst others by Krishna Nokhwal, Adhyaksha Ramgarh Lok Jan Samiti, hanuman Prasad Sharma, Vice President, Lok Raj Sangathan, Srimati Savitri Devi, Pal Ram Bhambhu, Maniram Lakesar, Rohtas Solanki, Balwant Singh, Kanhaiyalal Jain, Sonu Bhargava, and Harun Khan.