Justice Hosbet Suresh, a fearless champion of human and democratic rights, breathed his last on June 11, 2020. The Communist Ghadar Party of India deeply mourns the loss of this indefatigable fighter for the rights of the people and for their empowerment. 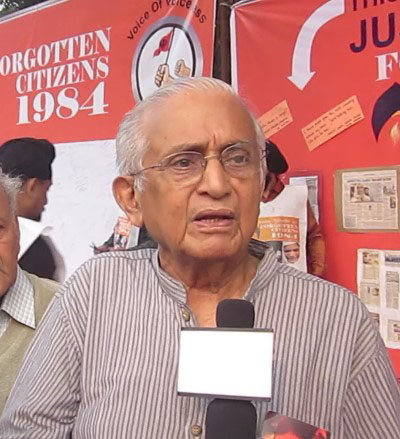 Born on July 20, 1929 in Hosabettu, Dakshina Kannada district of Karnataka, Justice Suresh obtained his B.A. from Mangalore University and LLB from KLE Society’s Raja Lakhamangouda Law College in Belgavi. He enrolled as an Advocate of the Mumbai High Court at the age of 24. He also worked as a part time professor of Law at the Government Law College and at K.C. Law College, Mumbai.

As a young man, he was inspired by the militant struggle of the workers of Mumbai for their rights. He joined the judiciary, driven by his passion for defending the rights of workers and the downtrodden.

Justice Suresh was a firm believer in the saying “Justice delayed is justice denied”. During his years as a judge, he was well-known for expediting cases. He often said that one should not need to come more than three times to court for one case, and he implemented this in practice.

Justice Suresh was well-known as a judge who upheld that workers and working people had rights by virtue of being human beings, and that they should not be deprived of these rights, as was happening under the present system. His name is associated with several landmark judgements in favour of workers, street dwellers and other urban poor.

Immediately following his retirement, Justice Suresh plunged enthusiastically into the work of the Indian Peoples Human Rights Tribunal which had been founded by former Supreme Court Judge VR Krishna Iyer. The tribunal worked to expose violation of human rights by the state in different parts of the country. Justice Suresh and the late Justice S.M. Daud investigated the communal violence that rocked Mumbai in December 1992 – January 1993, right after the demolition of the Babri Masjid. Their report entitled The People’s Verdict, which came out within six months, clearly pointed to the criminal role played by the major political parties as well as top state officials in organizing the communal massacres.

Justices Suresh and Justice P.B. Sawant were members of a fact-finding team headed by Justice V. R. Krishna Iyer that went to Gujarat in March and April 2002 to investigate the communal genocide there, following the Godhra train carnage. The fact finding team gathered 2,094 oral and written testimonies and met with many senior police officers and government officials. Their report entitled “Crime against Humanity” clearly established the role of the state administration and the police at the highest levels, in organizing and executing the genocide.

Justice Suresh was in the forefront of the struggle that the Indian state must accept the principle of Command Responsibility in all cases of communal violence including the genocide of Sikhs in November 1984 and the genocide of Muslims in Gujarat in 2002. He participated in drafting a proposed law called “The Prevention of Genocide and Crimes against Humanity Act 2004”, even though he had no illusions that any government would pass such a law. He clearly understood that unleashing communalism and communal violence against this or that section of the people, was the preferred policy of the ruling class.

Justice Suresh saw the intricate connection between criminalised political parties and the political system and process that brings and keeps such parties in power. Justice Suresh upheld the view that empowerment of the people is necessary to end the communalisation and criminalisation of politics. He understood, and spoke at every opportunity, about the necessity for people of India to carry out a complete overhaul of the political system and process of representative democracy and replace it with a system in which the decision making power is vested in people’s hands. He was convinced that only the empowerment of the people could save India from disaster, and that Indian people needed an organization which would lead them towards their empowerment. He devoted his energies into building such an organization. He was drawn to the work of the Committee for People’s Empowerment, the precursor of Lok Raj Sangathan, right from the time of its founding in New Delhi in April 1993. He was elected to the All India Council of the Lok Raj Sangathan at its founding meeting in 1998, and actively contributed to developing the program for people’s empowerment.

Wherever any section of the people faced denial of justice and rights, they could count on Justice Suresh standing steadfastly with them. He was ready to travel to any region of the country, at a moment’s notice, to investigate violation of human rights. His name is associated with nearly 40 reports on diverse instances of human rights violations. These included riots  organized over Kaveri waters in Bangalore in December 1991, the razing of slums in Mumbai, public food distribution as well as the violence perpetrated in Kashmir by the state. He always insisted that the Right to Life included in its ambit the Right to a Dignified Human Existence.

Justice Suresh inspired all who had the privilege of working with him with his learned insight as well as his extremely down-to-earth and humble approach. He unequivocally denounced black laws like TADA, POTA, UAPA, and the Armed Forces Special Powers Act (AFSPA) which legalized state terrorism. He was fearless in the face of threats he faced during the course of his activities from various echelons of the state.

The life and work of Justice Suresh will continue to inspire people in the struggle for a new society, in which people will be the decision makers and human and democratic rights will be guaranteed for all and enforceable.