Workers killed in a blast at power plant of NLC, Tamilnadu

A blast occurred in Thermal Power Station (TPS-II) of Neyveli Lignite Corporation India Limited at Neyveli in Cuddlore district of Tamil Nadu on 1st of July, 2020. This terrible accident happened in unit 5 of TPS II around 9.55am. 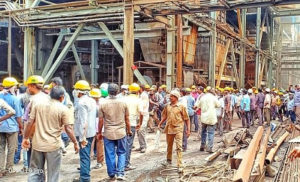 Six workers were killed on the spot and over 17 workers were injured critically. The injured workers were given first aid at NLCIL general hospital and were later referred to a private hospital in Chennai for further treatment. Subsequently the death toll has risen to 14 and some more workers are said to be still in critical condition.

According to a statement from the company, thermal power station II (TPS-II) was under shut down and maintenance activities were being carried on when a fire broke out in the boiler area following an explosion, resulting in injuries to the NLC maintenance team comprising one executive, two supervisors, three non-executive employees and 17 contract workmen.

The TPS II has seven units with a capacity of 210MW each with a total power output of 1470 MW. This plant alone has roughly 2,000 workers, including administration and distribution staff members. NLC also employs very large number of contract and temporary workers.

The Ministry of Coal is reported to have set up a high-level enquiry committee, headed by a former director of the NTPC, to inquire into the cause of the accident. Apart from this, an internal enquiry committee consisting of senior executives headed by Director (Power) of NLCIL has also been set up.   Meanwhile, the company has said that all the four units of 210 MV each of TPS-II Stage II have been ordered to be shut down for immediate safety audit.

This is the second such accident of a boiler explosion at this plant within a span of a few months. On May 7, five workers were burnt to death and eight more were critically injured in a boiler blast at the same plant. A total of five accidents have occured in TPS II in the last 18 months.

This  shows the utter callousness of the management towards the safety and life of the workers working in these plants. Workers have pointed out that the safety provisions in the plants are totally inadequate and that is the reason for the frequent terrible accidents in NLC. They accused the government and the management of compromising on safety aspects of the plant. The management’s attention is solely focused on handing over the company to private hands and outsourcing its operations, they claimed.

Workers of TSMT retrenched in the midst of COVID Lock-Down 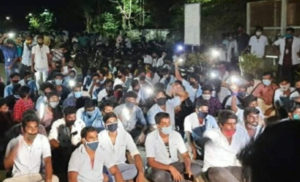 This company, located in Mahindra World city, Chengelpattu near Chennai is a subsidiary of TSMT Technology, a Taiwan based multi-national company. TSMT, assembles products such as Mobile phones and various electronic components including mother boards and touch screens. It is a supplier to various electronic brands such as Jio, MI, Samsung and few others.

The company has been following a ‘hire and fire’ policy for the past many years. From a starting strength of 2500 workers, now it has been reduced to about 450 including other service staff. About 50 of the workers are women. The workers are very poorly paid, considering the highly skilled nature of their work.  Most workers’ salaries are in the range of Rs. 12,000 to 14,000 per month.

The company has not paid any severance pay for these workers and removed them from work abruptly. The workers are justifiably very angry with the management for terminating the 100 workers in this unfair and cruel manner.

Workers went on a sit-in protest in front of the factory demanding that the retrenched workers be taken back. The police threatened to arrest the workers under the Disaster Management Act, but the workers continued their protest action at the gate from 3pm to 9 pm. They agreed to disperse only after the management promised to discuss the matter after the lock down is lifted.

Meanwhile, the workers are trying to form their own union to defend their interests.