Protests against the new ordinances on agriculture 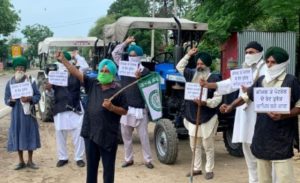 Thousands of farmers in Haryana and Punjab held protest actions across the two states on July 20, against the ordinances on agriculture brought in by the Central government and the steep hike in diesel prices. They demanded the immediate withdrawal of the ordinances as well as reduction of diesel prices. The farmers expressed their anger by holding a “tractor march” and blocking the roads by parking their tractors in several town and cities.

The three newly passed ordinances that has angered the farmers are the Farmers Produce Trade and Commerce (Promotion and Facilitation) Ordinance, Farmers (Empowerment and Protection) Agreement on Price Assurance and Farm Services Ordinance and the Essential Commodities (Amendment) Ordinance. Farmers’ organisations have threatened to intensify their agitation if the government refuses to withdraw these ordinances. The ordinances would demolish the conventional mandi system of state procurement of agricultural produce, eliminate the concept of a minimum support price fixed by the state and leave farmers completely at the mercy of corporates and market forces, the protesting farmers have declared.  The farmers are also opposing the Electricity (Amendment) Bill, 2020, which would greatly increase the production costs incurred by the farmers and ruin them.

Over ten farmers organisations in Punjab and Haryana are organising the current agitation. The agitation has received the support of the loading workers in the mandis as well as the organisations of commission agents of the mandis.

The All India Kisan Sabha organized protest actions at several places in Punjab and Haryana, denouncing the ordinances as detrimental to the farmers’ interests. The president of the Bhartiya Kisan Union (Rajewal), Punjab, Balbir Singh Rajewal has accused the government of assisting the big corporates in agricultural trade to exploit the farmers in the name of procuring their crops. With these ordinances, farmers would no longer be able to sell their produce at MSP in the mandis and neither would there be any redressal mechanism for the farmers’ grievances when they are cheated out of a fair price, he said.

Ajmer Singh Lakhowal, President of Bharatiya Kisan Union (Lakhowal), said that the ordinances would benefit the big corporate houses and lead to intensified exploitation of the farmers. Harinder Singh Lakhowal, General Secretary, BKU (Lakhowal) demanded that the government withdraw the ordinances and said, “Amid the Covid-19 crisis, such type of ordinances, legislations and hike in fuel prices are nothing more than a cruel joke with the common man.” 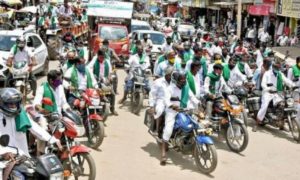 Farmers in Karnataka, under the leadership of the Karnataka Rajya Raitha Sangha and Hasiru Sena, are protesting against the recent government ordinance to amend the Land Reforms Act. The ordinance seeks to remove all restrictions on sale of agricultural land to private commercial enterprises. The protesting farmers have declared that this would lead to greater indebtedness among the farmers. The farmers have been holding  protest actions across the state since June 20. On July 21, these farmers are planning to protest at the Vidhan Soudha (State Assembly) in Bengaluru. They have also announced their decision to observe August 15 as “black day” as a mark of protest. 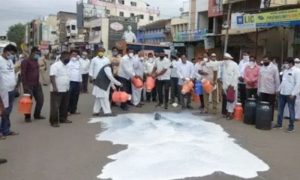 Since July 20, dairy farmers across Maharashtra have been dumping milk on the roads, as well as carrying out other forms of protest. Some farmers have handed over milk bottles to the local tehsildar in a symbolic gesture of dumping their stock with the government. They have threatened to dump milk at the doorsteps of politicians of all political parties, in order to highlight their demands.

The lockdown and consequent restrictions on movement caused serious problems for farmers engaged in rearing cattle for milk production. Milk procurement by dairies dropped by about 20-25 per cent and procurement prices fell from Rs. 30-35 per litre for cow’s milk to between Rs. 16 and Rs 22 per litre. Rising production costs have added to the farmers’ troubles.

The dairy farmers of Maharashtra have suffered huge financial losses due to the Covid-19 lockdown. The lockdown caused a steep drop in the demand for milk as restaurants, sweet shops and bakeries were closed, ice-cream makers had stopped production and there were no weddings or other public community activities. The dairy farmers have reported drop in sales by almost 30-40% in many cases, forcing them to convert the excess milk into skimmed milk powder. However, with all dairy farms in the state following this process, there is now an excess of milk powder, causing its price to fall. The price of milk powder is reported to have fallen from Rs. 300 per kg to Rs. 160 per kg. Moreover, most dairy farms have limited capacity for storage of the milk powder and are forced to sell at the low prices.

The main demands of the agitating farmers are a Rs. 10 per-litre subsidy directly into the farmers’ accounts and assistance by the state in facilitating the export of skimmed milk powder.