Healthcare workers in rural areas of Punjab on strike

On 23rd July, a one day strike was organised in Punjab by the workers of National Rural Health Mission (NRHM) to raise their demands. Workers held demonstrations outside primary healthcare centers, community health centers and civil hospitals situated in districts like Patiala, Fatehgarh, Hoshiyarpur, Abohar, Fazilka, Gurdaspur, Kapurthala, etc. and raised slogans against the Punjab government. 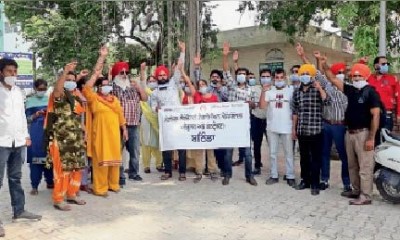 This strike was organised under the leadership of NRHM employees association. Assosication has given a warning stating that if their demands are not met with then they shall go on an indefinite strike.

Employees are demanding that all the workers should be given permanent appointments and full salary. They are demanding that governments advertisement for employment on contract basis should be immediately withdrawn and a meeting between leaders of the association and chief minister should be organised so that the employees can clarify their conditions. 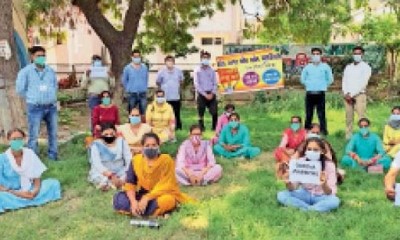 It is to be noted that the National Rural Health Mission is a major central government scheme related to health security in rural areas. The goal of this scheme is to provide accessible, accountable and quality healthcare services to all in every village. Under this scheme, there is a provision to provide all facilities at one place for many programs like Pregnancy, Child Health Project, Integrated Disease Surveillance, Malaria, Kalazar, Tuberculosis and Leprosy etc. Under this mission, apart from ASHA workers, and Anganwadi workers, health workers like doctors, pharmacists, data entry operators, lab technicians, staff nurses, ANMs. etc. work on contract.

The government has not given regular positions to workers employed under this scheme. The workers working on contract under this scheme, in practice work as much as permanent employees do. But the honorarium they get are even lesser than the minimum wages.

According to NHRM employees association, 9000 workers in entire Punjab and around 700 workers in every district are providing their services on contractual basis.

Workers under the leadership of Medical Lab Technician Association in Bhatinda went on a strike and held a demonstration in front of the blood bank. The head of Bhatinda District Association said that according to the standards, many posts of lab technicians are vacant in civil hospitals and various health centers in the district. They said that the new appointments are being done at higher salaries while they are still getting paid less. They explained that the contract workers work as much as the permanent workers do. Despite this, the contract workers are discriminated against by denying them appropriate salary, facilities, etc. In the midst of the crisis of Covid-19, volunteers are being recruited for the health sector. 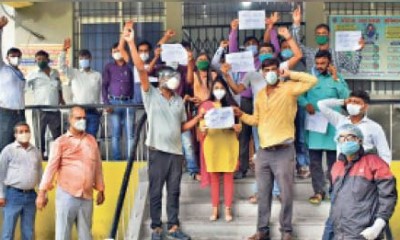 On 21st July, contract workers in Bihar working under the National Health Mission went on a strike with a charter of 21 demands. This strike was held after a call given by the Bihar State Contract Healthcare Workers Federation.
Contract workers working under this scheme like block health manager, block account manager, block community catalyst, block monitoring and evaluation assistant, para medical worker, lab technician, accountant, data aperator, and ANM , etc. joined the strike.

Bihar State Health Committee, in which the block health manager’s pay scale is 18,000, the block account manager’s salary scale is 12,500, the block community activator’s (mobilizer) salary is 12,000 and that of senior TB laboratory supervisory has been declared as 15,000.

Demonstrations were held in front of various civil hospitals and primary health centers in Bihar, including places like Betia, Bihariganj, Ghailadh, Madhubani, Sitamarhi, Kishanganj, Ara, Aurangabad. The striking employees sent a letter of demand to the District Officer through the Chairman of Civil Surgeon and District Health Committee.

One of the main demands of these employees is to pay one month’s equivalent incentive to managerial cadre personnel right from the state to the health sub-centers. Including all contract workers working under National Health Mission in the Public Health Management cadre and regularizing their appointments. The recommendation of the Fitment Committee should be implemented. Contract workers employed under the NHM must be given work without any additional qualificaton requirement. Under NHM, in case of death of a worker during his/her service, his/her dependents should be given a job with a compensation of 25 lakh to the family member, etc.

Due to this ongoing struggle led by the Bihar State Contract Health Employees Federation, the Health Ministry has agreed to some demands and assured to complete them within a month. The leaders on strike  have declared that  if the health ministry’s assurances are not implemented then all the contract workers will go on strike again from August 23.