On 17th August in a protest held at Buenos Aires around 25,000 people marched against government’s inefficient handling of the Covid-19 and the country’s economic crisis. On the same day in Argentina’s Chubut province, Public Health Workers Syndicate (Sisap), constituted by health care workers called for a 72-hour strike. The strike was called against the state government as it has not paid the workers full pay for months. Protesting workers also denounced the inadequate provision of personal protective equipment.

In Trelew, a city in eastern Chubut, members of Sisap, as well as the ATECh teachers’ union, held protests and strikes in the week of 10th August to demand pay, bonuses and benefits.

“We warn the government that we together with all health workers and other public servants will bring this country to its knees if these issues are not addressed with the urgency that they deserve and specifically the issue of the salary arrears for the last three months. Our nurses and doctors are being infected by this virus and they are not even able to pay their rent or buy food because their salaries are being delayed,” said Kenya National Union of Nurses Secretary-General Seth Panyako.

Dozens of doctors in Kenya started their strike on August 10th as warned. It is reported that due to delayed salaries the doctors who are contracting Covid-19 are being forced to pay for their treatment from their own pockets.

“We have colleagues who have contracted COVID, they have been in isolation, they have had to foot the bills, despite the fact that they contracted COVID while on duty,” said Ochanji, vice chairman of the Kenya Medical Practitioners, Pharmacists and Dentists Union. 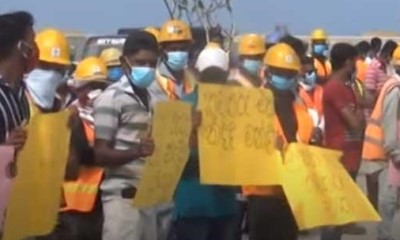 Colombo port workers are on strike since August 10, demanding re-employment of workers that was put on hold during Covid-19 pandemic. They said that around 150 such workers had not been reemployed for more than five months.  The China Harbour Company continued operations with minimum number of workers and did not call workers back to work despite the end of Lockdown. The company paid them only a monthly allowances of Rs. 5000 as against the minimum wage of Rs. 14,500 as declared by the government.

Hundreds of workers, including drivers, inspectors and other workers, have denounced the government and demanded a discussion with the labour commissioner. 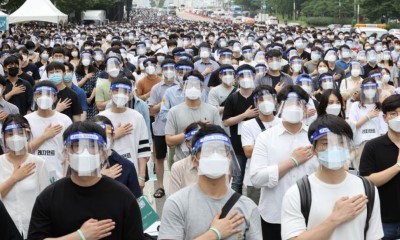 Tens of thousands of doctors in South Korea went on a strike on 7th August, and held demonstrations outside the parliament. The strike was against government’s proposal of “medical workforce reform”.

The striking doctors pointed out the reason why rural areas suffered from shortage of doctors was because doctors in rural areas were very poorly paid. Student doctors said that improving salaries of existing trainees will encourage them to move out of Seoul to rural areas where more professionals are needed. The Korean Medical Association (KMA) accused the government of offering little financial support and complained of extremely low salaries. They said shortages of doctors outside the main cities and in rural provinces was due to poor medical support infrastructure and lack of incentive for doctors to move into these areas.

About 16,000 members of the Korean Intern Resident Association (KIRA) participated in the strike. The trainees carried placards, with some reading “Intern/residents are not slaves” and “Interns and residents are the future of South Korea.” “We, young doctors, are paid at the minimum wage and work 80 hours a week, twice what the labour law stipulates,” (KIRA). “We have nothing to lose.”