Peasants’ unions in Punjab have given a “Dilli Chalo” call on 26th-27th November. They are demanding that the central government immediately repeal the three anti peasant laws passed in September.

Thirty peasants unions of Punjab met in Chandigarh on November 18 to chalk out the future course of action. They discussed the implications of the undeclared economic blockade of Punjab that has been imposed by the Central Government. They pointed out that the Center has stopped all good trains to and from Punjab, in order to cripple the economy of Punjab and set the people of Punjab against each other. 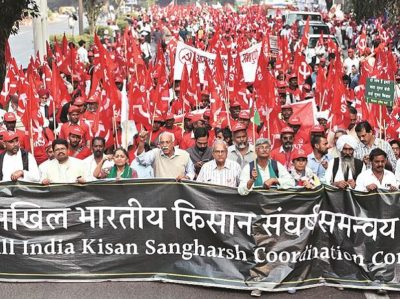 The peasants unions unanimously demanded that the Central government end the economic blockade of Punjab by allowing goods trains to operate. They exposed the government propaganda that their actions were responsible for crippling the economy of Punjab. The Central government was deliberately keeping train services suspended while blaming the peasants for it. They pointed out that their struggle is for a just cause which is directly beneficial to the economy of the state.

The peasant unions unanimously rejected the lying propaganda of the Central government that the three acts would benefit peasants. They condemned the government for not allowing them to organise a rally in Delhi on November 26-27. They declared their determination to make this rally a grand success. The district committees of the peasant organisations will be meeting on November 21 to chalk out their plan to ensure this.

From the time in July when the anti-peasant legislations were introduced as ordinances by the Central government, peasant organisations across the country have been agitating for their withdrawal. The peasant organisations have been reiterating their demand that the Central government ensure guaranteed procurement of all agricultural produce at a remunerative Minimum Support Price.

The protest actions of the Punjab peasants have included rail roko (blocking of trains), which began on 24th September at several locations in the state and also rasta roko at major highway junctions in the state. Roads were blocked at more than 45 places in 10 districts of Punjab. These protests were supported by many workers’ organisations in the state.

The peasants lifted the protests on freight trains on 13th October. They continued to block all passenger trains from moving on the tracks since their demands were not being addressed by the central government. In order to discredit the peasants struggle, the Central government has cancelled all goods trains to Punjab, since October 24th causing great hardship to the people.

This cancellation of freight trains has severely affected supply of coal, fertiliser and other essential items. There is shortage of power in Punjab. Industry is affected with over 13,500 containers lying at Dhandari dry port, because there are no goods trains to transport them to other parts of the country. Foodgrains are not being lifted from the mandis. What the Central government has done, is nothing short of blackmailing the peasants to give up their struggle.

More than 200 peasant organisations have come together under the All India Kisan Sangharsh Coordination Committee against the anti-peasant and anti-social legislation. Not only has the government failed to listen to their concerns, but its Ministers and spokespersons have been continually spewing lying propaganda about the benefits of the legislation for the peasants. On 13th November, nearly 50 peasants’ representatives were in Delhi to meet with the Union Ministers of Agriculture and of Railways, and the Minister of State for Commerce & Industry. The Centre proposed to form a committee to discuss their demands on the condition that passenger trains in Punjab were allowed to run. The Centre was only interested in the Punjab government’s assurance on “unhindered” train movement to resume services. There was no intent to listen to and address what the peasants were demanding. The peasant organisations reiterated their demand that the new farm laws be repealed and legal backing be provided for the minimum support price (MSP) mechanism.

The Central Government indicated to the peasants that another meeting would be held by 21st November.