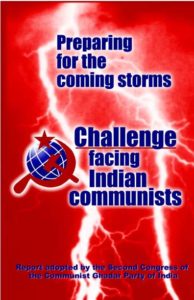 This report entitled Preparing for the Coming Storms- Challenge Facing Indian Communists, presented by Comrade Lal Singh, General Secretary of the Communist Ghadar Party of India, on behalf of its Central Committee, was discussed and adopted at the Second Congress of the Communist Ghadar Party of ndia, held in October 1998. By decision of the Second Congress, this report has been edited for publication.