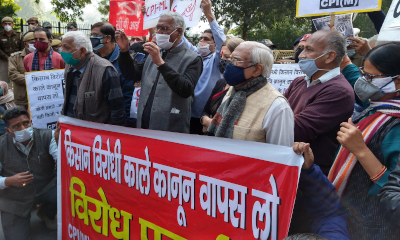 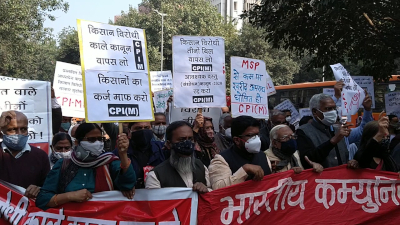 Lakhs of peasants from Punjab, Haryana and other parts of the country have been camping on the borders of Delhi, after having braved brutal police repression on the way, to demand that the Central government should immediately and unconditionally withdraw the three recently passed anti-peasant laws that favour the interests of the biggest capitalist monopolies. A joint front of over 500 peasant organisations has been spearheading this struggle. Far from conceding this demand, which has the support of peasants all over the country, the central government is making every effort to break the fighting unity of the peasants. It is trying to wear out the patience of the peasants, by forcing them to spend days and nights out in the open in the bitter winter, leaving them to fend for themselves. The people of Delhi and their organisations have reached out to assist the fighting peasants in these conditions.

Curfew-like conditions had been created in Central Delhi, in anticipation of the march. All the major roads leading to Jantar Mantar were heavily barricaded. Several hundreds of police personnel had been stationed at all the street corners and bus stops. People were being forcibly moved out of the area. In the midst of this heavy security by the state, hundreds of members and supporters of the communist parties converged in a flash protest march down Parliament Street. Behind a huge bright red banner of the joint platform of the Communist and Left parties, which read ”Withdraw the anti-peasant black laws!”,  they marched raising slogans denouncing the central government for its repression on the peasants and its refusal to heed their demand. They held aloft banners and placards carrying messages such as “Withdraw the anti-peasant bills!”, “Withdraw the three bills that favour corporate interests!”, “Stop looting the peasants!”, “Guarantee state procurement at remunerative price!”, “Down with the brutal repression on the peasantry!”, “Long live the unity of workers and peasants!”, etc.

The police made desperate efforts to stop the march, threatening punishment for violating prohibitory orders. Undaunted the protestors marched and on reaching the crossing of Jantar Mantar with Parliament Street, a militant rally was held.

The rally was addressed by Com D Raja (CPI), Com Brinda Karat (CPM), Com Santosh Rai (CPIML Liberation) and Com Prakash Rao (CGPI), among others. Speakers denounced the government for its brutal repression on the fighting peasantry and demanded that the government immediately withdraw the anti-peasant laws. The government is acting entirely in the interests of the biggest capitalist monopolies and adopting laws that will lead to devastation of the peasantry.  Pointing out that the government is simultaneously launching a vicious attack on the working class by introducing labour codes to ensure the highest rates of profit for the biggest Indian and foreign capitalist monopoly houses, they gave a powerful call for worker-peasant unity. “We will bring this government of the big corporate houses down on its knees! Through our united struggle, we the workers and peasants will end this rule of the capitalist monopolies and become the real masters of the country!”, this was the message that rang out loud and clear through this protest march and rally.