Shahidi Park at ITO in New Delhi was the scene of a militant protest action by the people of Delhi on December 14, to express support for and solidarity with the on-going agitation of the peasants. 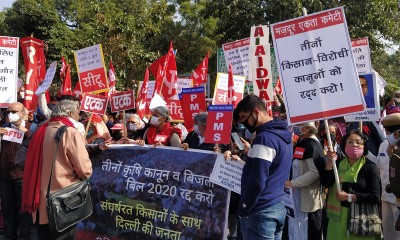 For the past nearly 18 days, peasants of Punjab, Haryana and other parts of the country have been sitting on dharna at the borders of Delhi, demanding that the government immediately repeal the three anti-peasant laws and withdraw the Electricity Amendment Bill. The peasants are furious that the government is blatantly ignoring their demand and instead, carrying out the fraudulent exercise of ‘inviting the peasants for talks’, only to suggest minor amendments that do not seriously address the concerns of the peasants. The agitating peasants have unanimously declared that these laws are meant to serve the interests of the biggest capitalist monopolies in agriculture to enrich themselves, while they will lead to devastation of the large majority of the peasants. They have declared that they will not give up their agitation until the government repeals these laws. 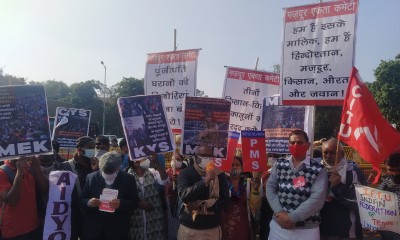 Hundreds of youth and students from the colleges and universities of Delhi, teachers, doctors, workers, women and human rights activists, poets, artists, lawyers, cultural workers and theatre and film activists participated in the joint mass protest action at Shahidi Park. The protest action was organized under the banner ‘Delhi for Farmers’. The participants carried banners and placards denouncing the anti-peasant laws. They raised slogans demanding that the government repeal the laws and condemning the all-round attacks on the rights of workers and peasants, in defence of the interests of the biggest corporate houses.  “Repeal the three anti-peasant laws!”, “Down with the government that defends the interests of the corporate houses!”, “No to privatization in agriculture!”, “Guarantee public procurement and MSP for all crops!” – these were some of the popular slogans to be heard at the protest site.

The rally was held in conditions of prohibitory orders under Section 144 in the capital.  But undeterred by the huge police presence and the heavy barricades to restrict the protestors, the people gathered kept the protest alive with enthusiastic speeches, lively songs and militant slogans. The protestors unanimously denounced the three anti-peasant laws and the manner in which the government is brutally disregarding the demand of crores of peasants all over the country. They denounced the misinformation about the peasants’ demands, being spread by the rulers through the official media. Representatives of the participating organisations addressed the rally.

Activists of the Communist Ghadar Party widely distributed copies of the statement issued by the party in support of the struggle of the peasants.

A press release issued on the occasion expressed the resolve to step up the protest actions in support of the peasants. “Until the three laws are repealed and the Electricity Bill 2020 is withdrawn, ‘Delhi for Farmers’ will continue to work together shoulder to shoulder with farmers in solidarity programs in support of farmer struggles across Delhi”, it concluded.