The 5000-strong nursing staff of the All India Institute of Medical Sciences (AIIMS) called off their agitation late night on 15th December in the wake of a Delhi High Court order restraining them from continuing with their strike and threatening to use the Disaster Management Act against them. The AIIMS Nurses Union had called the indefinite strike on 14th December in support of their demands for better wages. 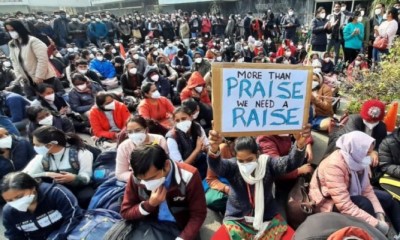 The AIIMS Nurses Union has explained to the public that they were driven to this situation because the administration was ignoring their demands. They had given notice for a strike a month ago and were ready for talks with the administration. But their demands were not being heeded. The union had submitted a letter to the director of the Institute pointing to the administration’s “callous attitude towards the nurses” as their reason to go on  strike. The demand for better pay was raised two years ago and the struggle is continuing because there has been no redressal of their demands.

Among other demands, the AIIMS Nurses’ Union has called for rectification of an order in the Sixth Pay Commission which denied nursing cadres two increments. In 2019, the government had agreed to correct this but so far nothing has been done about. The authorities have alleged that there is a misunderstanding of the clause. However the union has pointed out that many hospitals, including two Delhi government hospitals, have implemented this and there are several Central Administrative Tribunal orders on it.

The nurses’ union has also exposed the claims of the administration, that all the other demands made by them have been addressed, as utterly false. They have pointed out that there is a vast difference between the administration’s public announcements and its actions.

One of the banners of the striking nurses read, “More than Praise, We need a Raise!” The nurses, like all other health workers, have been working tirelessly for months on end, tending to Covid-19 patients. The Prime Minister, various ministers and government officials have repeatedly hailed them as “Covid Warrriors” and showered praise on them for their dedication to patients through the pandemic. But when it comes to addressing the real problems they face, when it comes to giving them their due remuneration, the government has turned a deaf ear. Punishing hours of work without any relief, lack of adequate protective gear and equipment, danger of infection, scarcity of accommodation and social stigma have been serious problems faced by these workers, apart from inadequate wages.

Several Resident Doctors and their associations have supported the demands of the striking nurses. The Rajasthan Nurses Association has written to the AIIMS Nurses Union expressing its wholehearted and unconditional support for the nurses in their fight for their long pending demands.