On 14 December 2020, thousands of peasants from the Hanumangadh district in Rajasthan staged a massive demonstration at the Nohar tehsil headquarters. All the peasants and workers organisations in the area also participated in the demonstration. Responding to the call given by the All India Kisan Sangharsh Coordination Committee, peasants across the country organised demonstrations against the three anti-peasant Acts passed by the government. 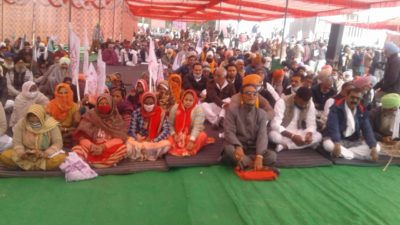 As the morning sun arose on the horizon, peasants with their tractors and trollies started to gather at stage set up for the demonstration. By noon thousands of peasants had gathered and the meeting was held with full vigour. Holding green banners in their hands the peasants were full of enthusiasm.

During the demonstration peasants raised militant slogans against the three farm laws, as they passed by the main gate of the Collectorate, expressing their anger. Following the demonstration the peasants submitted a memorandum to the Additional District Magistrate addressing it to the President of India.

Addressing the huge gathering all the speakers from various organisations demanded that the three farm laws must be immediately repealed. The speakers said that these laws will further worsen the conditions of the peasant’s and their family. They demanded that the government must guarantee minimum support price for all crops and the three laws must be repealed. They gave a call to the peasants to join the agitating peasants who have reached the borders of Delhi.

They stressed that there is urgent need to protect the unity of all peasants. With an intent to create division amongst the peasants and end the movement, the government is now singing the tune of amendment to the laws. The peasants have repeatedly stressed that they do not want any amendments, but complete repeal of the three laws. They said the tide will soon turn when we join the agitating peasants at the Delhi borders. All the peasants vowed that their movement shall continue until all the three laws are repealed.

On 14 December over a dozen of peasants from Goluwaal village in Hansliya left for Delhi to join the agitating peasants. Before leaving with their tractors and trolleys, they displayed enthusiasm and resolve to build unity of all peasants.  They said that the treatment meted out to thepeasants by the government is not acceptable. If the need arises every child of the peasant will be marching on the streets of Delhi. Former Sarpanch Ismail Khan, former Panchayat Samiti Member Jagjit Singh, Shravan Singh, Phul Singh, Guricharan Singh, Gursevak Singh felicitated the departing peasants battalion with garlands.