A continuous struggle is being waged for the last nearly twenty days in the Nohar tehsil of Hanumangarh District, Rajasthan around the Irrigation water system. In this context, the peasants’ demonstration and fast unto death led by the Kisan Sangharsh Samiti at Raisinghpura Minor had continued for 18 consecutive days till 17th December. Hundreds of peasants are taking part in the demonstration every day. Eleven peasants are continuing to sit on hunger strike without food or water. During this period, 4 protesters have been hospitalized due to critical condition. They have continued their fast in the hospital as well. 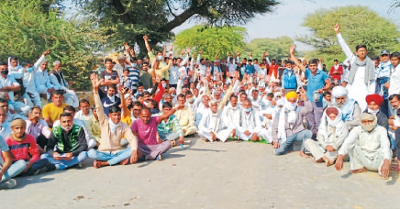 Their demands include a stop to the theft of irrigation water in this area and for setting up a police checkpoint to ensure this. They have also demanded the immediate repeal of the three agricultural laws passed by the central government. Along with these, there are many other demands including consolidation of land (chakbandhi).

On 14th December, the protesters tried to stage a Nohar tehsil protest on the call of All India Kisan Sangharsh Coordination Committee as part of the struggle to repeal the three agricultural laws but the police stopped them on the way. The protesters then blocked the Sahwa-Taranagar Jaipur highway for several hours.

On 15th December, Hanuman Prasad Sharma, the All India Vice President of Lok Raj Sangathan, joined the demonstration. He said that the demands of the peasants are valid and Lok Raj Sangathan expresses its full support to these demands.

It is a fact that peasants have to struggle constantly in this area with regard to problems of water theft and lack of water for irrigation. However, the administration and government have a very apathetic attitude when it comes to addressing these problems.

Chairman of the All India Kisan Sangharsh Coordination Committee, Kishan Saharan said that the agitation of the peasants would continue in a phased manner.