Lakhs of peasants all over the country demonstrated in their districts and cities on 14th December to show their solidarity with the demands of their peasant brothers and sisters who have been camping on the borders of Delhi since 27th November. 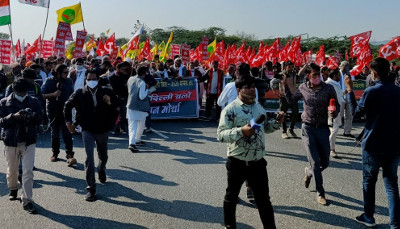 At the call of Samyukt Kisan Morcha (SKM), a joint front of peasant unions from Rajasthan sat on a one-day hunger strike on 14th December. Peasants from Rajasthan and Haryana reached Delhi-Jaipur Expressway to join the protest. They held placards and shouted slogans against the anti-farm laws. They blocked the road that runs towards Delhi. Leaders of All India Kisan Sabha (AIKS) addressed the protesting peasants throughout the day. The peasants marching towards Delhi faced brutal attacks by the police. Two water cannons vehicles, a crane, boulders, kerb stones, truck containers were deployed to stop their advance. 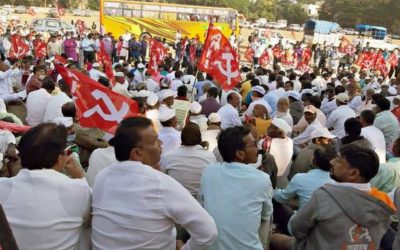 Peasants from Lucknow, Western Uttar Pradesh and Nashik, Maharashtra held massive protests on 14th December against the three farm bills. In UP, the protests were organised under the banner of Bharatiya Kisan Union and Kisan Mazdoor Sangathan.

Protestors had gathered  at the district headquarters and observed a one-day hunger strike from 8 a.m to 5 p.m. Thousands joined the protest and demanded withdrawal of the new farm laws. Heavy security was deployed to stop the protests, but nothing could stop the protesting peasants. They broke the cement barricades erected in Bijnor, Shamli and Saharanpur district and marched towards the office of the Collectorate. In some places, police used batons as well as water cannons to disperse them. But the peasants were not deterred.

Peasants protesting at the Delhi-Ghazipur were joined by peasants from Uttarakhand on 14th December 2020. Peasants from Madhya Pradesh and Gujarat marched to reach Delhi and blocked a major highway in Haryana’s Palwal on their way. Peasants said that they are out on the streets as a result of the experience they had before and strongly believe that the new farm laws will completely finish them off. 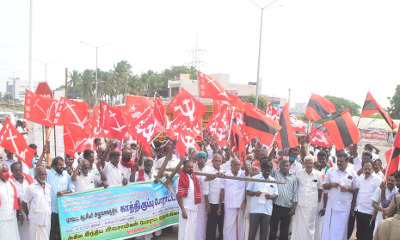 Thousands of peasants marched to the district collector’s offices in several towns of Tamil Nadu on 14th December. The district collectors’ offices across the state were overrun by peasants and workers from trade unions who joined the sit-in protest. Many of the protesting peasants and leaders were detained. The All India Kisan Sangharsh Coordination Committee (AIKSCC) has resolved to continue the sit-in protests from places where they are being detained.

Vice president of the All India Kisan Sabha (AIKS) Tamil Nadu unit said, “The state government after supporting the three anti farmer bills in the parliament, is now using brute force to suppress the protests of the peasantry. The police had denied permission for the peaceful protest of the peasants across the state.”  In Thanjavur, the police arrested the peasants in five different parts of the district while they tried to arrive at the protest venue.

Peasants from across the state of Kerala launched an indefinite protest at the Martyrs’ column in the state capital Thiruvananthapuram. The strike was held under the banner of Kerala Samyuktha Karshaka Samithi, which is part of the All India Kisan Sangharsh Coordination Committee (AIKSCC). Kerala Samyuktha Karshaka Samithi consists of various peasants’ organisations including Kerala Karshaka Sangham (Kerala chapter of All India Kisan Sabha), Karshaka Congress along with other organisations. Kerala State Karshaka Thozhilali Union (KSKTU), a body of agricultural workers, is also the part of the ongoing protests across the country. On 14th December, all district headquarters in the state of Kerala were overrun by protesting peasants. They were joined by many other organisations and sections of people like students, youth, workers, trade unionists, artists, etc. 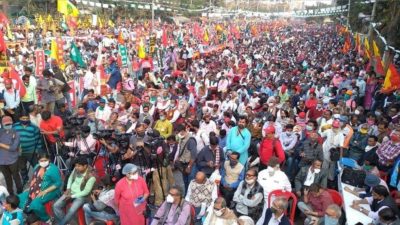 Yet another state where peasants stormed the streets with protests and slogans was West Bengal. On 16th December, about 50,000 peasants from across the state gathered in Kolkata and blockaded Rani Rashmoni Avenue, a major road near Raj Bhavan, for over four hours. Massive rallies were held that covered major parts of the city, beginning from Sealdah railway station and Howrah railway station. The two massive rallies converged at Esplanade area and Raj Bhavan. The rally was a red wave of flags of the All India Kisan Sabha (AIKS). Solidarity from different sections of the people including students, youths and the activists of the Centre of Indian Trade Unions (CITU), Eastern Railways Men’s Union and the BSNL workers union was pouring in continuously.