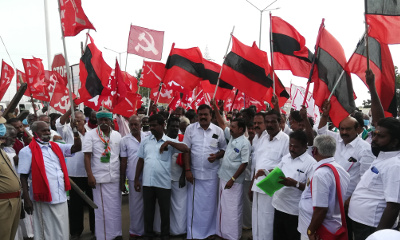 Peasant organizations all over TN organized militant demonstrations and agitations in all districts of TN in front of the Collector’s office on 14th December. This was in response to the call given by various peasant organisations to intensify the protests all over India on 14th-16th December.

Peasants of Thoothukudi district gathered in large numbers in front of the Thoothukudi Collector’s office on December 14th morning. Peasant organizations of  All India Kisan Sabha, Tamizhaga Vivasayigal Sangam and many other organizations planned and organized this agitation. Peasants gathered in front of Collector’s office holding their Union’s flags. They were holding a banner of their agitation, which read “Indefinite Struggle at Collector’s office by All India to ask Central government to withdraw the Anti-peasant Acts, In support of the struggling Peasants in Delhi and to demand Government of Tamilnadu to pass a resolution in the TN Assembly against these Anti-peasant demands”. Peasants have come many different places of Thoothukudi district. Many women activists and peasants also joined the agitation. 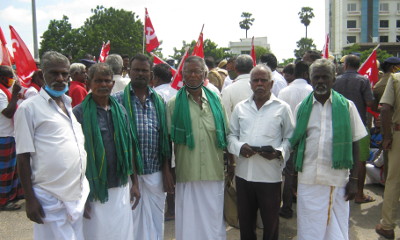 The AIKS conveyor stressed the urgent need to fight against the government and the necessity to annul the Anti-peasant laws. Then Com K P Perumal spoke. He denounced the government which has brought these anti-peasant legislations to support the profit greedy big Corporations. He pointed out that they have gathered there to show their solidarity with the peasants who are fighting in Delhi and all over the country against the anti-peasant laws by peacefully demonstrating in front of Thoothukudi Collector’s complex. It is atrocious for the Police and authorities to deny permission even for such peaceful agitations. On behalf of all those who have gathered there, he reiterated their resolve to continue the agitation there and refused to disperse till the acts are withdrawn by the government. 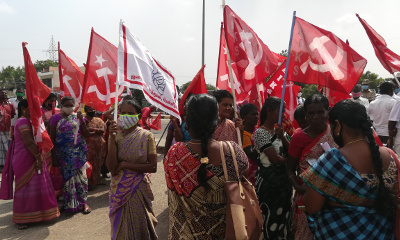 However Police kept saying that the protesters do not have any permission to gather and agitate there and wanted the protesters to voluntarily co-operate with the Police for the arrests. And then they started arresting the protesters and took them away.

However one can see the resolve and determination of the Peasants in Tamilnadu to fight against the anti-peasant laws of the Indian Government. The agitation continued on 15th and 16th also.