The Modi government’s drive to ensure a ‘business friendly’ environment to Indian and foreign big capitalists at all costs has met with a militant rebuff from workers in Karnataka recently.

On December 12, workers at the Taiwan-owned Wistron factory at Narasapur near Bengaluru, which manufactures iPhones and other devices for the US-based corporate giant Apple Inc, erupted in protest.  The workers could no longer tolerate the denial of wages due to them and their increasing exploitation in the name of production efficiency.  Their action followed on the heels of the strike by the workers of the Toyota Kirloskar motor plants at Bidadi, also near Bengaluru, over similarly exploitative conditions, which still continues after several weeks.

Following the outburst at Wistron, the police have rounded up nearly 300 workers and thrown them into jail.  Despite Apple Inc. and the state government’s own enquiry report admitting that there had been grave violation of laws and non-payment of workers’ wages by Wistron, the shameless Yediyurappa government has expressed worry only about how the workers’ action will affect Karnataka’s reputation as an ‘investment-friendly’ state.  He has assured the Wistron capitalists of all help to restart production and punish the workers.  Similarly, the state government has been doing everything it can to help the Toyota Kirloskar management which is enforcing a lockout that even the High Court has termed illegal.

In the last few years, the Indian state, at the behest of Indian and foreign monopoly capital, has tried in every way to attack the hard-won rights of the working class.  What is more, both the Central government and various state governments have criminally used the conditions of the Covid pandemic and restrictions on assembly and movement to push through new labour codes which aim to deny workers of many of the rights won after long years of struggle. They have also openly declared that they will offer the land and labour of the Indian people at the lowest terms in order to draw foreign capital away from China to India.  The Wistron and Toyota Kirloskar workers’ agitations show that the working class is not willing to submit to these attacks on their rights and working conditions.  It is significant that these strikes are taking place in the hi-tech electronics and automobile industries which the government is trying to showcase as ‘model’ and ‘high-paying’ industries.

Why are the workers at Wistron angry?

The workers at Wistron are educated young men and women, many of whom hold engineering degrees or diplomas from the ITIs.   When they joined the Wistron factory, many of them were promised salaries of Rs 20,000 per month or more, but they are in fact receiving only Rs 8000 or even as low as Rs 5000.  This is done by making deductions from their pay for various reasons, or by just refusing to honour the terms of their contract.

The plant has over 12,000 employees.  When they were interviewed for the job by Wistron officials, the workers were led to believe that they were being hired directly by the company.  But for all except about 1,300 workers, their letters of appointment were issued by as many as six different contractors.  Through this deliberate fraud, Wistron is able to treat these workers as contract labour, deprived of the rights due to regular workers of the firm.

Instead of working regular 8 hour shifts, the workers are made to work 12 hour shifts, without overtime pay. For many workers from the surrounding areas, this means getting up at 4 am for the day shift and getting back after 8 pm. The backbreaking long working hours has been facilitated by the labour ordinances issued by the government in the conditions of the pandemic, which have extended the working hours in the name of giving a boost to the economy.  Workers have complained that, apart from a short lunch break and a 15-minute break for tea, they cannot move, even to use the bathroom or drink water, without permission.  They are denied leave even for medical or other emergencies.

The workers have no union, as this plant opened only in July.  Nevertheless, they tried repeatedly to approach the management with their grievances, as well as the Deputy Commissioner of Kolar district and the state Labour Department.  Their outburst on December 12 followed from the refusal of those in authority to talk to them.  All this has been ignored by the authorities and much of the media, who have instead focused mainly on workers’ ‘vandalism’.  Wistron initially claimed it had suffered a loss of Rs 437 crore in damages, but has now quietly scaled it down to a loss of Rs 53 crore only.

Immediately after December 12, Modi is reported to have said that he was very disturbed by the ‘violence’ at Wistron. Yet he was not disturbed by the blatant deception and unfair labour practices indulged in by the foreign capitalists and their management against his own countrymen.  The same anti-worker pro-capitalist attitude was echoed by the Karnataka Chief Minister and members of his cabinet.  This is despite the fact that the Karnataka government’s own Department of Factories, Boilers, Industrial Safety and Health, in its enquiry report, listed several violations of laws and regulations committed by the Wistron plant, as reported  in Deccan Herald, 15 December, 2020. 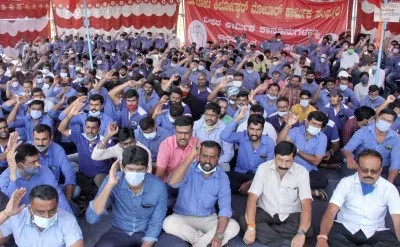 In the two TKM plants at Bidadi, more than half of the 6000 workers belong to a union.  The conflict at this plant began on November 9 when a union member who attempted to approach the management about the workers’ grievances had a false case foisted on him and was suspended.  The workers struck work in protest, immediately following which the management declared a lockout. 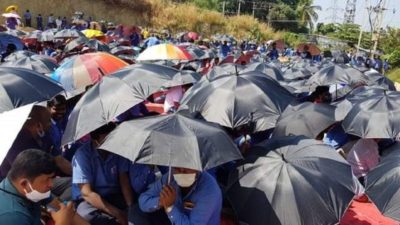 The issues faced by the TKM workers are similar to those faced by the Wistron workers, especially as regards the stepping up of workers’ exploitation in the name of increasing efficiency.  Without increasing the number of workers or paying overtime, the company has insisted on stepping up production without concern for the workers’ health or well-being. “The company is trying to fix work in milliseconds,” says the employees’ union president. “It’s almost impossible. It’s inhuman.” The so-called “Toyota Production System” aims at turning cost-cutting into a fine art in order to achieve maximum profits.  This includes not only speeding up production, but also trying to get regular workers to take a severance package so that the company can replace them with contract workers.

The Karnataka Chief Minister Yediyurappa had a well-publicised meeting with Kirloskar and other big capitalists to assure them of all help to restore ‘normalcy’ in the factory.  However, after more than 6 weeks, the strike and lockout continue, with most workers refusing to sign the conditions imposed by the management to resume work.

Globalisation of production is against the interests of the working class

It is not a coincidence that these two factories where workers have come out in protest are considered “flagbearers” of the “Make in India” program. Successive governments at the center and state have been going all out to create most favorable conditions for Indian and foreign capital to make maximum profits. In a bid to attract foreign capital, governments in the center and states have offered land at concessional rates, and openly violated existing labour laws related to right of workers to form unions, social security, overtime, hiring of contract labour for work of regular nature, etc. The Indian and foreign capitalist monopolies have been demanding that the Central and state governments amend the labour laws to legalise the intensification of the exploitation of workers. Towards this end, the current Modi government has utilised the Covid pandemic to push through three anti working class labour codes in the teeth of opposition from the working class.

This rotten pro-capitalist policy is being touted by the government and its apologists as something that is in the interests of the “nation” and its “development”.  But what is this “nation” if not the workers and the vast majority of toiling people?  And what is this “development” that takes away the rights, dignity and wellbeing of those who work?  Through their protests, the workers at Wistron and Toyota Kirloskar are showing that they reject the anti-labour policies of the Indian state and the capitalists, as well as the lies that these are somehow good for the country. Workers of our country are refusing to be cowed down by the onslaught of the capitalist class and the government on their rights.