Following the events of 26th January, those who are actively leading and participating in the two-month long movement of the peasants demanding their right to livelihood are being subject to harassment, without let up, by the Delhi, Haryana and UP Police, and by the Central Bureau of Investigation (CBI). The Union Home Ministry temporarily suspended internet services in Singhu, Ghazipur, Tikri borders and their adjoining areas from 11 pm of 29th January to 11 pm of 31st January to ‘maintain public safety and averting public emergency’ amid the ongoing farmers’ protest. The Yogi Adityanath administration had also cut off power and water supply to hundreds of farmers at the Ghazipur border, who have been camping out on the roads. Subsequently, water supply has been cut off at all the sites.

The Delhi Police has arrested 122 people and named 44 peasant leaders in a FIR filed in connection with the peasants’ tractor parade in the city on Republic Day. They have been charged with attempt to murder, rioting and criminal conspiracy. “Lookout notices” have been issued with respect to those named in the FIR – to prevent them from trying to flee. This is how the state criminalises any protest in the country. People who are fighting for justice are alleged to have been part of “anti-national” conspiracies. Nothing is proved. In fact, all signs are pointing to the hand of the Indian state behind the violence that erupted on 26th January.

More than a 100 peasants who were at the protest sites till 26th January are missing. Their families have no clue of their location or if they are dead or alive. The police are refusing to provide any information as to which police station they were taken to.

According to a senior police official, the “investigation” of those named in the FIR will come within the ambit of the Special Cell’s probe under the UAPA and sections of the IPC relating to sedition for their role in the larger conspiracy. This is a clear threat to the peasants and workers who are in struggle.

The government is also taking measures to deter the ruling party in the state from extending any support to the peasants. The Delhi Police, which comes directly under the Home Ministry, and the central security/investigation agencies are reported to have raided some villages in Punjab in the name of searching for individuals accused of “indulging in violence.” However, the state government has not been informed prior to these searches nor has the Punjab Police been taken along during operations in the state. The CBI chose to take men from the Central Reserve Police Force (CRPF) instead of the local police. This is a high-handed violation of the rules that a raiding or visiting police team has to inform the local police station of the area concerned and take their personnel along.

The Central Bureau of Investigation conducted surprise checks at 20 Food Corporation of India (FCI) godowns in Punjab and Haryana. It claimed that the move is part of preventive vigilance to check corruption at locations where public dealings take place. The action started jointly with vigilance teams of the FCI in the two states. This comes at a time when every household in every village in the state is participating in the struggle.

Not only are the Delhi, Haryana and UP Police harassing the peasants at the borders, the ruling party is actively organising groups of so-called locals to throw stones and attack the peasants and their families at the border. These aggressors are being given full cover by the police. Anyone who defends himself from the attack by picking up a lathi or unsheathes his sword is thrashed and then detained by the police. Media reporters are being picked up for photos of “locals” attacking peasants in front of the police. Two reporters were picked up on 30th January from Singhu border, and detained. While one of them was released at 5 am the next morning, the other reporter has been arrested under several sections of the IPC.

Sedition charges are being filed against those who report anything contrary to the official report.  This began with the filing of sedition charges by the UP and MP Police against six senior journalists and editors for their reporting on the farmers’ tractor parade and the ensuing violence here on Republic Day

Even prior to 26th January, the Delhi and Haryana police had begun threatening workers and peasants with action if they joined the protests. The National Investigation Agency (NIA) summoned at least 40 people, directly or indirectly associated with the ongoing farmers’ agitation, to appear for questioning in connection with a case filed against the banned Sikhs for Justice (SFJ). The SFJ was outlawed by the Indian government under the Unlawful Activities (Prevention) Act (UAPA) in July 2020. There is no evidence of any link between the SFJ and the on-going protests.

This is another tool of the State. Whenever it wants to suppress a struggle, it raises the spectre of the involvement of some organisation or individuals who are alleged to be “extremists” or “separatists” to threaten and browbeat those who are actively supporting the struggle of the peasants.

In the weeks prior to the planned tractor march on Republic Day, the Delhi police had picked up many workers who were supporting the peasants in different ways – through supplying essential items, through lending their tractors for conveying people and goods, etc. 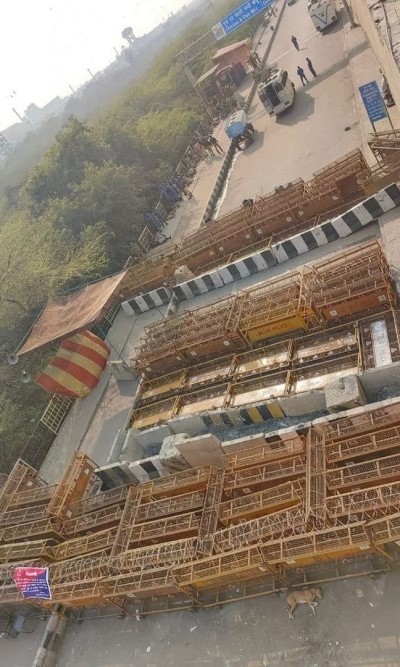 The latest reports show that even as thousands of peasants are making their way to the protest sites, the State is doing everything in its power to deter them. Deep trenches have been dug at the borders with Delhi. 14 layers of barricades have been established and spikes have been implanted on the roads to ensure that the peasants do not push aside the barriers with their tractors. Most condemnable is the state’s action in depriving the sites of water, even for the use of toilets and cooking. Electricity and internet have been cut off. The full might of the state is being unleashed to harass people who are active in the on-going struggle of the peasantry and deter those who want to support the struggle.

However, the peasants and all toilers who are standing in support of this movement are not deterred at all. They have not quit their protest sites. Maha Panchayats are being held across the states of UP, Rajasthan and Haryana to declare unanimous support to the movement. The Samyukt Kisan Morcha (SKM) has declared that the unity of all the peasant unions and organisations will not be broken. As of 2nd February, they have formed a panel to provide legal aid to anyone who has been arrested or has gone missing. A number of lawyers have already reached out to the SKM offering free legal aid.