At the call of Kamgar Sangathana Samyukta Kruti Samiti Maharashtra (KSSKS) and Maharashtra Shetkari Kamgar Morcha a mass meeting was held outside Kurla Station (E) in support of the Kisan agitation and the Samyukta Kisan Morcha’s call for Chakka Jaam. 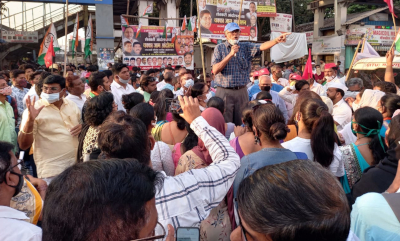 The speakers were unanimous in hailing the fight of the peasants and in condemning the government for passing the black laws and attacking the peasants so brutally, physically as well as by maligning. As one after the other the government’s lies got exposed, they came up with new ones. Several significant issues were raised by the different speakers. 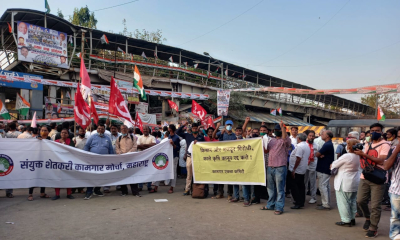 They pointed out that it is the policy of the ruling classes to malign those fighting against injustice. The British called Bhagat Singh a terrorist and the Government today is calling the Punjabi peasants Khalistanis and accusing the protesting peasants of being anti-national. The peasants have denounced the Modi Government as just a manager for the ruling big corporate houses. It is the demand of the corporate houses through their associations such as CII, FICCI and ASSOCHAM that the Modi Government must not roll back the farm laws. They see these laws as a means to increase their wealth by controlling agricultural trade and taking over of the land of the peasants.

The working class and the people all over the country are out on streets today in support of the fighting peasants. It is important for the working class to also realise that the ruling BJP government is implementing the policies dictated by the monopoly corporate houses. They want to take over all the public sector industries and the natural assets of the Indian people.

The speakers noted that on this same day, at Vishakhapatnam, thousands of workers of Rashtriya Ispat Nigam Limited (RINL) are on the roads along with their families in protest against the Central Government’s announcement on February 3, 2021 of 100% disinvestment of RNIL along with management control by way of privatisation.

The speakers called on the workers and peasants of India to join together to oppose the anti-people and anti-national policies of the ruling big monopoly corporates.