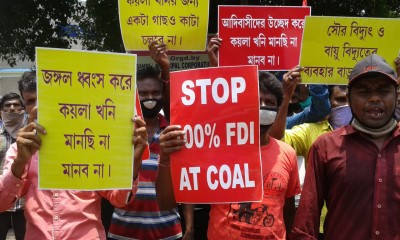 Kamgar Ekta Committee (KEC) organised a public meeting on January 31st, 2021 on the theme “Unite against privatisation” with the focus this time on the coal industry. This was the seventh in a series of meetings organised by the KEC as part of the effort to build the unity of the working class against the capitalist program of privatisation. The meeting was attended by many trade union leaders and activists from different industries and services. Those participating included All India and state level leaders from Railways (AIGC, AILRSA, AIRTU, WRTA, AISMA, and AIREC) and Petroleum (BPT & NTEA, BPCL Mumbai Refinery). Apart from leaders of the coal sector, hundreds of coal union activists participated in the proceedings from their union office computer screens in different regions of the country.

Com Mathew, the Secretary of the KEC, welcomed the participants and explained the importance of uniting the workers of different public sector enterprises and services with the people at large, against the capitalist program of privatisation. He explained that privatisation is disastrous for all of us. It is important to clarify why privatisation is anti-social, so that we can build a broad front against privatisation. KEC has been working in that direction and has received tremendous response from the leaders and workers of different industries and services. Com Mathew welcomed the invited speakers – Com Nathulal Pandey, General Secretary, Koyla Mazdoor Sabha and President, Hind Khadan Mazdoor Federation, Com D D Ramanandan, General Secretary, All India Coal Workers Federation and Com Shiv Kumar Yadav, President, Shramik Sabha, Western Coalfield Limited.

The presentation on behalf of KEC began by bringing out the strategic importance of coal for India’s energy security. Coking coal mines were nationalised in 1972 (and non-coking coal ones in 1973). This was done at the behest of the big capitalists, in accordance with the Tata Birla Plan that had been formulated in 1944. Over the years, through militant and united struggle, coal workers forced the capitalist class and its governments to fulfil workers’ demands related to wages and working conditions. The capitalist class wants to take back the hard won rights of coal workers, and intensify their exploitation. They are seeing the possibility of making massive profits by taking over coal mining, Coal India is now a highly profitable public sector company. The greedy monopoly capitalists have grown big enough to take over the coal deposits of the country which rightfully belong to the people of India. They want to liquidate Coal India as a prelude to its privatisation. The previous Congress and the current BJP governments have been facilitating this process. However, the workers of Coal India have been waging a militant fight to prevent this handover.

Com Pandey began by pointing out that before the coal mines were nationalised, the capitalist owners of the mines were using unscientific methods and profiteering was their sole motive, completely compromising on the safety of the mine workers. There was no compensation for accidents and no hospitals in the mine premises. The workers were kept in camps (e.g. Ghorakhpuri camps) and treated like animals. They were given inedible food and some escaped and fled to save their lives. They used to be caught and beaten up for this. These were the reasons why the workers fought for nationalisation of the coal sector.

Coal India is ready to give the government as much coal as it requires. It has ground staff available. But there is false propaganda that we don’t give what is required. The truth is that the government is trying to liquidate Coal India, It is not giving funds for infrastructure upgradation. Coal India has 67 million tonnes of ground stock available. It is actually in such a situation that if nobody takes its coal then it will suffer losses as the coal will go bad. To oppose the Modi government’s decision to open coal mining sector to private players, coal workers went on a 3-day strike from July 2-4, 2020.

The capitalists want to drive us workers into slavery. They want to become the owners of all the country’s resources. The Central Trade Unions as well as the coal industry unions are determined that they won’t back down. We will oppose the anti-worker and anti-national labour codes. We need to save the country. We need to save Coal India and all the other public sector enterprises. We need to organize another meeting on the need for all public sector companies to come together on one platform and unitedly oppose the privatisation policy of the Central Government. Com Pandey also denounced the Modi government for its stand on the issue of farm laws.

Following the speech of Com Pandey, Com D D Ramanandan, General Secretary, All India Coal Workers Federation addressed the meeting. Com Ramanandan began by explaining that the country will not develop without coal and energy. He then detailed how right from the time of nationalisation, successive governments have been systematically cutting back on the workforce employed in Coal India, in order to intensify the exploitation of coal workers.

Now the Government wants to open up coal mining to private operators who can mine the coal and sell in the open market.

The logic given behind opening mining to private players is that 235 million tonne of imported coal is used in coastal regions of Gujarat, Karnataka, Tamil Nadu, etc. Cost of production of coal by Coal India is Rs. 750 to 800 per tonne and if it has to reach Tamil Nadu then due to transportation the cost increases to Rs 3,800 per ton. For bulk coal transportation we need a dedicated coal corridor and transporting lines. There was talk of making 3 transport lines in Jharkhand, Chhattisgarh, Odisha. These lines have not been built in 15 years. If they had been built, then we could have produced as much as we wanted without worry of reaching the coal to the far off states.

The Government talks about demand and supply and how we are not able to meet the demand. This is a complete lie and a well thought of plot by the government. Coal India can produce1 billion tons in 1 year. We just need some more infrastructure and machinery support by government and we can do it.

Coal India has given Central and State governments Rs. 61,000 crore this year by way of taxes and duties. And after nationalisation it has given Rs. 5 lakh crores as royalty, cess, excise duty, district mining fund, corporate tax, and dividend. But the government wants to finish Coal India. The government talks of being aatmanirbhar. This is to hide the reality that it is serving the interests of the biggest Indian and foreign capitalist monopolies.

We need to expose these anti national policies to all the workers of our country. We need to understand that the energy security of our country is at risk with these steps taken by the government. Coal workers have been opposing the government’s policies. When the country was in lockdown the coal workers organised a 3-day total strike struggle opposing privatisation. All the Coal Unions came together, including those affiliated to CITU, HMS, AITUC, INTUC and BMS. In the future as well, we will continue to fight. Other public sector workers must also join.

Com Shiv Kumar Yadav explained in detail how since 2014, the Modi government has been pursuing a plan to liquidate Coal India as part of the capitalist plan to privatise coal mining.

Before 2014, Coal India had to give 70% of its production to the power sector and the remaining 30% could be sold by e-auction to steel, cement and other industries. The Modi government announced in 2015 that 90% of coal production should now go to the power sector and only 10% can be sold by e- auction. This was termed the “Shakti” policy. The price at which Coal India was to sell coal to the power sector was also fixed at Rs. 1,061 per ton. This was way below the market price which is around Rs. 2,800 per ton. 20% of the coal produced by Coal India is from underground mines and the cost of producing there is high and can be anywhere between Rs. 8000 to Rs. 12000 per ton. 80% of the coal produced is from open cast mines and the cost of producing this is low and is Rs. 800 to Rs. 900 when permanent workers are employed and is even lower at Rs. 600 to Rs. 700 when contract workers are employed.

People need to understand that coal workers make huge sacrifices for our people. Lies are spread that coal workers from Coal India are paid big salaries. People must understand what difficult work coal mining is. Coal miners walk 5km underground on foot. Look at the sweat on the forehead of the coal miner that flows to his feet. Look at the condition of people in just going in and coming out of the mines. There is no ventilation and they have to take off their clothes to work for 6 hours. Only when you see that will you realise the tough life of a coal worker. The lives of soldiers at the border are threatened only when the enemy is in front of him. But a coal worker risks his life every time he has to go into the mine! There is no guarantee of his life. The contribution of a coal worker must not be belittled. Without it, the economy of the country will collapse. All public sector establishments need to unite. We must make the working class and people conscious of what is going on in our country, If Coal India goes on a strike then all these big politicians will call us also anti national and terrorist. It’s very good that we have started this program. People should know the truth behind Coal India. We are making thousands of crores of profits, then who benefits by driving us towards privatisation?

In 2014 as well, Modi government played with religious sentiments and they spoke of ending corruption. But it is clear to everyone that they want to hand over the country’s resources to private capitalist monopolies. They are planning to liquidate and privatise Coal India. They want to shut down its mines and auction them off. Why are the best places for mining auctioned off, whereas Coal India is given blocks in areas with a lot of issues? The block in Chandrapur had very good coal at a higher and easily accessible level. But after his retirement the director of Coal India alerted private companies about it and it was given off to them. If we had got that then we would have made thousands of crores of profit.

KEC must continue this work. Coal workers and leaders will join. We need to wage a united struggle to show this government about what we are capable of!

All the speakers appreciated the efforts of KEC. After interventions by a number of speakers, Comrade Mathew thanked all the speakers and the participants and announced that the next meeting on privatisation would be on February 14th 2021, where we would be discussing the Central Government’s Budget, focusing on the expected proposals for further accelerating the anti-people privatisation drive in favour of monopoly capitalists.

Please also refer to the announcement for details of the webinar on 14th February.