Hundreds of women, men and youth gathered at Jantar Mantar in New Delhi on March 8, 2021, to mark International Women’s Day. 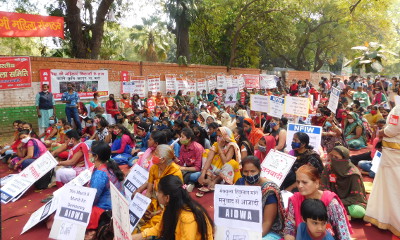 An inspiring banner depicting the lakhs of women kisans in struggle at the borders, with the slogan “8 March – kisan mazdoor mahila – march together!” inscribed on it, provided the backdrop for the meeting. Banners of the participating organisations, bearing slogans such as — “Repeal the three anti-kisan laws!”, “Repeal the four labour codes!”, “Down with the growing violence on women!”, “We demand equal pay for equal work!”, “We demand security at the workplace!”, “With political power in our hands we shall end oppression and injustice!” — adorned the walls and spaces around the meeting. 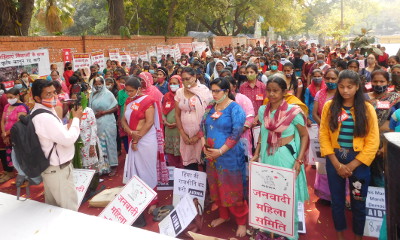 The meeting began with a tribute to the lakhs of kisan sisters and brothers who are braving the wrath of the state unflinchingly, demanding repeal of the laws that spell disaster for their future.  Tributes were paid to the hundreds of people who are facing arrest and torture, for boldly defending the rights of the oppressed. The meeting expressed solidarity with our sisters and brothers in Kashmir who are forced to suffer inhuman torture and indignity at the hands of the state. The participants observed a minute’s silence in memory of the kisans who have lost their lives in the protests and many others who have died at the hands of the state, fighting for the cause of the oppressed.

Renowned poet and activist, Gauhar Raza recited some poems he had composed, saluting the brave kisans in struggle and the heroic women of our country standing up for their rights and dignity.

Representatives of the participating organisations addressed the meeting. 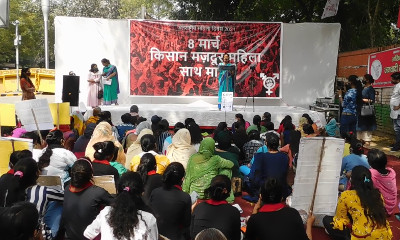 Speakers pointed out that International Women’s Day marks the tradition of women fighting against injustice and oppression, which is something the rulers want us to forget. They condemned the many-sided attacks on women – the attacks on the kisans demanding repeal of the four anti-kisan laws – including thousands of women who have been forced to suffer unbearable hardship for more than 100 days, the growing insecurity of livelihood, the attacks on the rights of women workers, the selling off of precious national assets to the biggest corporate houses, the privatization of essential services including health, education and public transport, the attacks on the rights and freedoms of women including the right to choose one’s own life partner, the state organized communal violence and state terror, attempts of the rulers to divide us on the basis of religion, the gruesome attacks on dalit women, the rape and killing of women, the jailing and torture of youth and women who are daring to protest against the cruelty and injustice of the state, and many more. The speakers highlighted the staunch struggle that women are waging, along with men, against these attacks, often coming out in the front ranks of the struggle.

They pointed out that the government is acting openly in the interests of the biggest corporate houses and against the interests of the vast majority of people. They highlighted the attack on our democratic rights including the right to protest, to voice our opinions and to decide our future. They spoke of the need for women to organize to defend our rights. They called upon women to come forward in the struggle for a future free of exploitation and injustice, shoulder to shoulder with our men, as kisans, as workers and as youth.

The participating organisations included All India Democratic Women’s Association (AIDWA), National Federation of Indian Women (NFIW), Purogami Mahila Sangathan (PMS), Centre for Struggling Women (CSW), All India Progressive Women’s Association (AIPWA), All India Mahila Sanskritik Samiti (AIMSS) and Swastika Mahila Sangathan (SMS). A young lawyer spoke to the women about the need to speak up and fight for our rights. A poem paying tribute to the fighting women was presented by an activist. Youth activists presented songs followed by a lively street play in defence of the struggle of women for a brighter future.

The meeting concluded with militant slogans “International Women’s Day, Zindabad!”, “Raise your voice, we are one!”, “We shall fight, we shall win!”, “Inquilab Zindabad!”