Indian Railways is a lifeline of the country. Nearly 800 crore people travel on the Indian Railways every year. It is the only reliable and affordable means of long distance travel for crores of workers, between their place of work and their home town or village. Over 110 crore tonnes of goods are transported on Indian rail lines every year, from food to coal to cars. About 68,000 kilometers of rail routes connect different parts of our vast country. With nearly 16.5 lakh workers, including about 4 lakh on temporary contracts, it is the country’s largest public sector employer. The annual revenue of Indian Railways exceeds Rs 2 lakh crore. Over 165 years, assets worth about Rs 6 lakh crore, excluding the value of huge amount of land it owns, have been built with public money. It is truly the lifeline of the country and has played a vital role in the development of the country.

Despite the vital role played by Indian Railways in the economy and life of the people, this valuable asset of people of the country is being privatised for the benefit of Indian and foreign monopolies. These monopolies are eyeing the profitable operations of Indian Railways.

The privatisation of Indian Railways will hurt both lakhs of workers and crores of rail passengers as the life experience of other similar privatisations in India and other countries has shown.

The necessity for organisation and unity was acknowledged at that meeting by all constituents of the reconstituted NCCRS. They committed to work together to oppose privatisation and corporatisation, irrespective of their differences.

As a first step, NCCRS decided to bring out a booklet, “Unite to defeat privatisation and corporatisation of Indian Railways” to mobilise all the rail workers and their families for intensifying their struggle.

From September 2020 onwards, the KEC has been organising a series of meetings in the series “Unite against Privatisation!” (See www.cgpi.org for reports of the previous meetings) National leaders of a large number of unions and federations of public sector establishments and services as well as people’s organisations, activists and interested citizens have been very seriously participating in these meetings. One important conclusion that has been repeatedly voiced in these ten meetings held so far is that we need to come together irrespective of union and political affiliations and together oppose privatisation. There is a need to educate the people at large about how privatisation will adversely affect them. A strong movement against privatisation must be built up by mobilising all sections of our people, the workers, women, youth, retired people and all the consumers and users! Several organisations have already been acting on this resolution, by using social media as well as print media to spread awareness.

As soon as the Modi-led NDA government came back into power in 2019, it announced a 100-day Action Plan for ‘unbundling and restructuring the Indian Railways’. This was nothing but a plan for privatisation of the Indian Railways. The plan was strongly opposed by rail workers all over the country. An important milestone in the unity of rail workers to fight against privatisation of railways was achieved when a joint forum consisting of seven associations and union of rail workers – All India Guards Council (AIGC), All India Loco Running Staff Association (AILRSA), All India Station Masters Association (AISMA), All India Railway Track- Maintainers Union (AIRTU), All India Train Controllers Association (AITCA), Indian Railways Ticket Checking Staff Organisation (IRTCSO), Rail Mazdoor Union (RMU), as well as Kamgar Ekta Committee (KEC) and Lok Raj Sangathan (LRS) organised a meeting in Mumbai on August 2, 2019 to oppose the Plan.

Many recommendations of the 100-day Plan were along the lines of those of the Bibek Debroy Committee, constituted by the Modi Government in September 2014. The major thrust of the Debroy Committee was to dismantle the Indian Railways step by step and hand it over to private operators and hence they were resolutely opposed by all the railway trade unions. 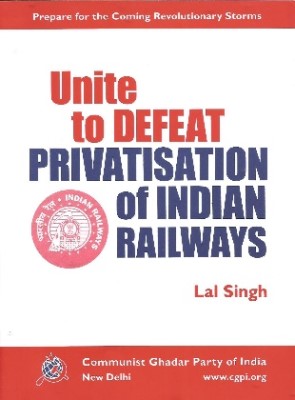 In 2014, when the Debroy Committee recommended the corporatisation and privatisation of the whole of Indian Railways, the strong opposition by rail workers forced the then Railway Minister, Mr. Suresh Prabhu, to announce that the recommendations of the Debroy Committee would not be implemented. Even the Prime Minister, Mr. Narendra Modi had to announce in front of thousands of workers of the Diesel Loco Works (DLW), Varanasi in December 2014 that the Indian Railways would never be privatised and asked workers not to believe such “rumours”!!

What has unfolded since then and especially in the last few years clearly demonstrates that the Prime Minister and successive Railway Ministers, one after another, have been telling the same lie. The privatisation of Indian Railways has been pursued even more vigorously after that. The Railway Ministry has begun the process to introduce 150 private trains on select and profitable 109 routes. A mere perusal of the 109 routes reveals that all revenue earning routes are selectively being handed to private operators leaving the loss-making sections with the railways. The bidders have already been shortlisted and the final bids are expected to be received by 30 June 2021.

The privatisation of railways stations in the name of their redevelopment and modernisation has actively begun. The stations and surrounding land is being handed over for commercial development and management on 30 to 60 years of lease. In the first phase 123 stations have been taken up. Work on the first two stations at Habibganj (Bhopal), Madhya Pradesh and Gandhinagar, Gujarat is already at an advanced stage. The initial bids for eight more stations have already been received. The privatisation of the prestigious New Delhi and CSMT, Mumbai stations is of particular interest to many capitalists due to the very precious real estate around both these stations.

The plan to run private freight trains on the Western and Eastern Dedicated Freight Corridors on their completion in 2022 was announced in the Union Budget of 2021.

On 16 Mar 2021, the Railway Minister informed the Lok Sabha, “So far, 87 land parcels, 84 railway colonies, 4 hill railways and 3 stadiums across the country have been identified for asset monetisation .” Monetisation means that these assets of the Indian Railways will be handed over to capitalists on long lease for making profit.

All these facts indisputably show the relentless efforts to privatise the Indian Railways. Faced with the strong opposition to privatisation of the Indian Railways, the government spokesmen continue to lie about and deny their intentions. Even in Mar 2021, the Railway Minister, Piyush Goyal announced in the Lok Sabha, “Indian Railways will never be privatised. It is a property of every Indian and will remain so,” and that it will remain with the Government of India. He had made a similar statement in the Parliament in July 2019 when the 100-day Action Plan was strongly opposed by rail workers.

Over the years, many organisations have been working to build up a strong opposition to the planned privatisation of the Indian Railways.

Along with rail workers, rail passengers have also begun to understand that privatisation of the Indian railways is not in their interest. Rail services will become more expensive and safety will be compromised after the privatisation. Unprofitable services will be withdrawn leading to a large number of people getting deprived of rail services.