The prices of six edible oils — groundnut oil, mustard oil, vanaspati, soya oil, sunflower oil and palm oil — have risen between 20% and 60% at all-India levels in the last one year. In May 2021 the price of edible oils reached the highest ever seen during the last 10 years. This is putting a further burden on working people who already been reeling under the highest price of petrol and diesel over the last few months. 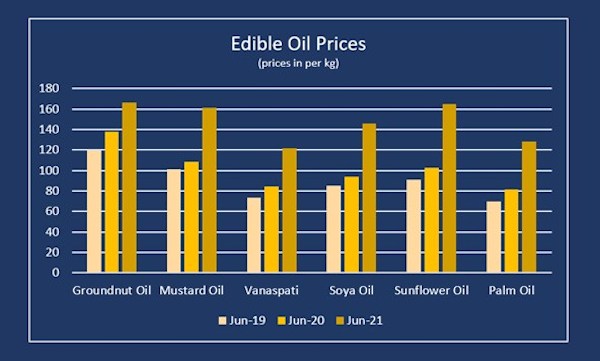 Like cooking oil, the prices of pulses (dal) have risen by 4 to 15 percent since last year.

Pulses are among the cheapest source of protein and edible oil is a major source of fat for the majority of people of the country. Rise in their prices affects their nutrition adversely.

The annual consumption of pulses is around 25 million tonnes. The government had planned to import 3 million tonnes of various pulses during 2020-21. India is the largest consumer of pulses in the world and also a major importer.

In case of both edible oil and pulses, government after government has focused on imports to meet shortfall in production.

This is a deliberate policy, which serves international and Indian trading monopolies who dominate trade in edible oils and pulses. These monopolies form cartels to raise the domestic price of these commodities, after purchasing them at much lower prices in the international and domestic markets. People are robbed because they have to pay much higher prices for these daily necessities.

The government raises or lowers import duty, or lifts or imposes import curbs, allegedly to regulate domestic prices. Thus, on May 15, 2021, the central government announced the free import of tur, uran and moong dal. This has been done to make out to the people, how the government is actually concerned about their well being.

When domestic prices rise, farmers sow the crop in larger area and increase production but prices crash when the time for harvesting comes as the government allows imports or reduces import duty to bring down prices. So in the next season farmers reduce the area of sowing and production drops, resulting in larger imports. This cycle keeps repeating.

The need is to significantly raise production of both oilseeds and pulses to reduce the dependence on imports and break the link with international prices. (Per capita consumption of pulses has been falling instead of rising.) Their production will increase only if farmers are assured of a remunerative minimum support price (MSP) and the procurement of their produce at MSP. The government does announce MSP for pulses and oilseeds but does little procurement at MSP; as a result farmers never get the price they should.

The policy of the government of reliance on imports for edible oil and pulses results in robbery of the masses of people, including the peasants who grow oil seeds and pulses. It is the Indian and international multinational food monopolies who profit from this policy.

In the final analysis, the question boils down to the orientation of the economy. Should social production and exchange be geared to fulfil the rising needs of the entire population, or should it be geared to maximize the profits of a minority of capitalists? Providing for peasants and working people must become the motive force of agriculture. Only this will ensure that livelihood of peasants is secured and working people are protected from food inflation.