Over a thousand people participated in a militant rally in London, UK on August 15th 2021. The protest rally was organised to express the support of Indian workers and students in the UK to the kisan andolan in India. Indian Workers Association (GB) was amongst many organisations participating in the protest rally. The protestors gathered outside the Indian High Commission in London. The participation was so large, all nearby streets were also full of protestors. 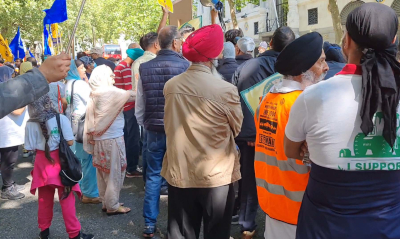 The protestors denounced the Indian Government for not repealing the three anti- farmer laws. Speakers from different organisations pointed out that that Indian Independence benefits only a tiny minority whist the overwhelming majority continue to suffer from abject poverty. The Indian government represents the interests of big capitalists like Tata, Ambani, Birlas, Adanis, and others. They demanded that the three anti kisan black laws as well as the four anti- worker legislations be repealed. They pointed out that the actions of the Indian Government throughout the kisan andolan clearly shows that there is no democracy in India and people’s demands are ignored.

The Indian Workers Association (GB) played a prominent role in the protest held outside the Indian High Commission in London. Activists from different branches across Britain shouted militant slogans and gave speeches condemning the Indian State. They pointed out that Indian State represents the interests of about 150 monopoly capitalist houses who are collaborating with foreign multinationals. The anti-farmer and anti-worker laws have the sole purpose of enriching these Indian and foreign monopoly capitalists at the expense of the kisans and workers of India. Indian Independence was merely a transfer of power from British colonialism to their collaborators who are now the new masters of India. The black laws are aimed at intensifying the exploitation of the labour and resources of our country.

The speakers expressed great pride in the manner in which the kisan andolan has unified all sections of peasantry, working people, youth and women throughout India. People have united irrespective of religion or caste. The sacrifices made throughout these past nine months have been immense and many have died in the course of this ongoing struggle. The kisan andolan has impacted people throughout the world and smashed the myth that India is the largest democracy in the world. The kisans fighting in India have won support amongst justice minded people throughout the world. The Indian government has been shaken by this struggle and is trying hard to sabotage and divide the heroic masses fighting to repeal the three anti farmer laws and the anti-worker legislations.

Speakers from IWA (GB) pointed out that all the so called mainstream parties such as the BJP, Congress, Aam Aadmi party, and other similar parties will continue to serve the interests of the Indian bourgeoisie and the masses of people cannot rely on any of these parties to represent their interests. They come under various disguises and slogans but are committed to implementing the agenda of the Indian and foreign monopoly capitalists of enriching themselves by intensifying exploitation of workers, and robbery of peasants. The speakers drew inspiration from the growing unity amongst workers, peasants and other toiling sections.

Slogans of Kisan Mazdoor Ekta Zindabad resonated throughout the protests. This symbolised the growing unity and solidarity of the peasantry and working class in their common struggles against the exploitive Indian State.

Slogans remembering our martyrs such as Shaheed Bhagat Singh, Udham Singh, Madhan Lal Dhingra, Kartar Singh Sarabha  were repeatedly raised as a reminder that the vision of  real freedom for our people  has not been fulfilled. Slogans of Inquilab Zindabad could be heard all over, delivering the message that revolution upholding the vision of our beloved patriots was the only solution. Only a change of system, ushering in the rule of workers, peasants and other toiling sections, could offer a secure livelihood and a bright future for the majority. Inquilaab is the only solution!