Kisans protesting against the government’s anti-kisan laws were brutally attacked by the police at the Bastara toll plaza near Karnal, Haryana on August 28. The police carried out a lathi charge on the farmers marching towards Karnal, to protest at a state government meeting being addressed by the Chief Minister of Haryana.

The kisans bravely fought back. They forced the closure of the toll plazas at Karnal, Panipat and Ambala. Large parts of National Highway-44 were also blocked. The blockade was lifted only after the kisans detained by the police were released. 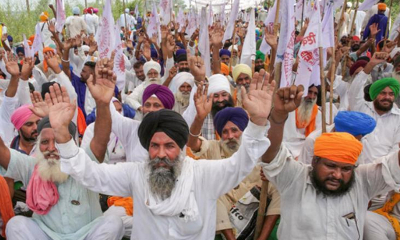 Kisans also blocked roads at Titram Mor in Kaithal and Cheeka. In Jhajjar, kisans blocked the Delhi-Rohtak highway at Jakhoda bypass near Tikri border in protest against the police lathi-charge.

On August 30, thousands of kisans gathered at a mahapanchayat at Gharaunda grain market in Karnal. The mahapanchayat had been called against the police lathi-charge on kisans in Karnal on August 28. At the mahapanchayat, kisan andolan leaders denounced the state government for ordering the police to use force to prevent kisans from crossing the barricades to reach the protest venue. Kisan andolan leaders demanded stern action against the Karnal sub-divisional magistrate, in particular, who has gone on record ordering the police to “smash the heads” of the kisans.

For the past more than nine months kisans have been protesting at the borders of Delhi, demanding that the three anti-kisan laws should be revoked and that kisans should be assured a legally guaranteed remunerative minimum support price for all agricultural produce. Throughout Punjab, Haryana, UP and other states, kisans are up in arms against the government and are organizing militant protest actions. These protest actions have the support and active participation of all the people of the neighbouring areas. Faced with this anger of the kisans and the growing unity of the people, the state is resorting to brute force to terrorise them into submission.

Communist Ghadar Party of India condemns the brutal police attack on the protesting kisans in Karnal. The struggle of the kisans against the anti-kisan laws and in defence of their livelihood and rights is completely just. The kisans have every right to demonstrate their opposition to laws that put their livelihood at stake. There is no justification for the state to criminalise their protest.