The AIIMS Nurses Union, along with the Karmachari Union – AIIMS and Officers Association of AIIMS submitted a joint strike notice to the hospital administration, saying that an indefinite strike will commence from October 25 if their demands were not met. 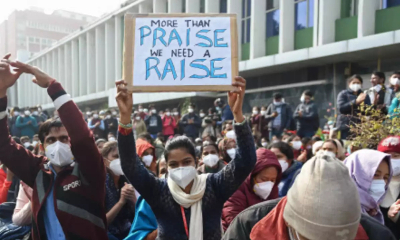 The AIIMS workers have explained that they have come to this as a last resort. Submitting their list of 47 demands in all, the aggrieved employees belonging to all cadre groups in AIIMS Delhi said that their demands have remained pending for decades and have so far not met with any serious response from the administration. Despite the workers participating in multiple meetings with the administration, their demands have not been met. In the main, the demands are for parity in pay scales and allowances, bonus and other benefits and reduction in the workload of the employees. 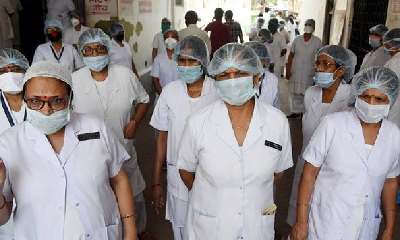 Their other significant and long-standing demand has been to increase the number of posts of nurses and other employees. While many centres have been built in the hospital, the number of posts for these services have remained the same. As a result, the employees face extreme work pressure; they are painfully aware that the quality of service to the patients suffers because of this. There has been no cadre review at AIIMS for 30 years whereas the Regulation states that this should be conducted every five years.

The unions’ other demands include a review of the contribution made by the administration in the New Pension Scheme (NPS), enhancement of hospital accommodations, along with reformation of the EHS facilities in the hospital. The EHS (Department of Family Medicine) was established to take care of “preventive, promotive and curative aspects” of health care of institute employees and their dependents.

In the course of the Covid pandemic, the employees have experienced very difficult work conditions; they have lost many of their colleagues. They feel that much of this could have been mitigated and prevented had conditions of work been commensurate with the demands on them.

Any time that health workers give a strike notice, the administration blackmails them with the issue that they are neglecting the interests of their patients. This has been especially so during the pandemic. The striking employees have explained that they stopped the strike as per the direction of Delhi High Court in December, 2020. At that time, the AIIMS management had promised the court that their demands will be considered, but nothing happened.

It is this kind of inaction and false promises that has pushed the nurses and other employees of AIIMS to give their strike notice. On the one hand, the government hails the selfless service of health personnel during the pandemic but on the other, it does not care for their working conditions and the extra protection they need to remain healthy and continue carrying out their duty. All declarations of praise and thanks are to no avail in the face of such injustice.