A very large section of our country’s population is unable to earn its livelihood. Lakhs of families are living on the edge of human survival, borrowing from whoever they can to make up for the loss in income. The problem of unemployment is getting more and more critical. So is the problem of indebtedness, which is growing both in urban and rural areas.

The ruling class often boasts about India’s “demographic dividend”. This is the potential advantage of having a relatively young population. Over two-thirds of the Indian population are of working age, defined as the 15-64 age group. This is much higher than the world average. However, this potential advantage is being completely wasted today as more and more people of working age are unable to find any job or any means of self-employment.

Spokesmen of the ruling class conveniently blame the problem on the Corona Virus. However, data show that employment has been on the decline for many years now, since well before the Corona Virus pandemic broke out. The repeated lockdowns during the past 18 months have only aggravated an already festering problem, namely: the inability of the economic system to employ the available human resources.

Out of the total population of about 140 crores in 2021, India’s working age population is about 94 crores. Of this working age population, an estimated 43.3 crore people are engaged in remunerative work or actively looking for such work. They constitute the Labour Force. Of these, 39.7 crore are employed and 3.6 crore are unemployed. Those employed include both those earning wages (about 21 crore) and those who are self-employed (18.7 crore).

The ratio of the employed labour force to the working-age population is called the Employment Rate. It has been falling steadily, from even before the Corona Virus pandemic. It fell from 46 percent in 2018-19 to 45% in 2019-20. It is estimated at 42% percent in August 2021. 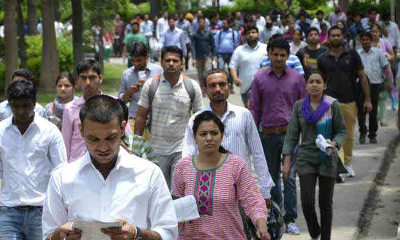 The Corona Virus pandemic and repeated lockdowns since March 2020 have led to additional destruction of tens of lakhs of jobs and sources of self-employed income. Capitalist companies have cut down on the number of workers employed and increased the number of daily working hours. Many small-scale enterprises have closed down permanently.

Youth have been severely affected. Youth unemployment rates were high even before the pandemic. As many as 44% of the 15-24 age group were reported to be unemployed in 2019-20. At the present time, this ratio is estimated to be about 54%. That is, more than half of India’s youthful workers are unemployed and face a dim future!

The total number of persons who are looking for work but unemployed has risen from about 2.5 crore in 2019-20 to 3.6 crore at the present time.

Employment prospects are so bad that many people have dropped out of the labour force altogether. They have stopped even trying to get a job. This is reflected in a decline in the Labour Force Participation Rate (LPR)

The LPR is the ratio of the Labour Force to the Working-Age Population. It is a measure of the extent to which a socio-economic system is using the available workforce in the social production process. It is the proportion of the working-age population who are employed or actively seeking employment. The labour force participation rate has been falling systematically since 2016-17. It is about 46 percent at the present time. It is around 70 percent for men and less than 20 percent for women.

Decline in Quality of Employment

The large-scale destruction of jobs and sources of livelihood has been accompanied by increasing insecurity and worsening conditions of work for the employed labour force. 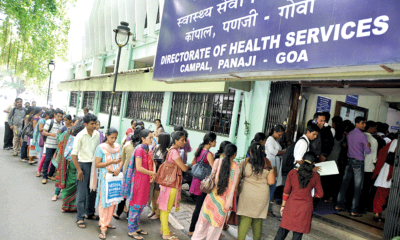 Workers in both large and small private enterprises are in danger of losing their jobs any time. They have no security of livelihood. In the majority of capitalist companies, there has been a large-scale shift from regular permanent jobs to temporary and fixed-term contracts. Workers in public enterprises are threatened by the privatization program.

There are crores of people working at jobs for which they are over-qualified and grossly under-paid. They work for very long hours and are not paid extra at overtime rates. They are deprived of even the right to protest.

Delivery workers (food delivery or courier service) in our cities and Ola or Uber drivers are classic examples of workers who have no job security and no benefits. They are not paid regular salaries. They are paid only incentives and have to themselves bear the cost of their business running expenses. Delivery workers are made to pay for their fuel. Ola and Uber drivers take loans to get their vehicles and have to pay EMI from their meagre incomes. These so-called “gig” workers fall between being “wage employed” and being “self-employed”, They work for a company but there is no contractual agreement and no fixed salaries or any kind of benefits. They work for long hours, up to 16 hours a day!

There are two factors that have affected household incomes. One is the inability to find a job or any means of livelihood through self-employment. The other is the compulsion to work at much lower wages, at whatever job one can find. Many people employed on regular salaries simply lost their jobs and had no source of income. Many people employed on contract or daily wages got some employment, but at much lower wage rates.

It is not uncommon to come across an engineer with a Master’s degree offering door-to-door technical services for fixing household electronic gadgets; or a school van driver struggling to make two ends meet by driving an e-rickshaw bought on loan; or a person who used to work as a chef in a 5-star hotel now working at one-fifth of his earlier salary for an NGO.

To cope with the loss in income, households have had to sell their family assets or borrow heavily, with debts incurred ranging from 2 to 6 times households’ earnings. The poorest households (bottom 25%) had debt burdens nearly four times their monthly household income, according to a recent Covid-19 Livelihoods Survey. Their debt is from money lenders at high rates of interest, which means further intensification of poverty for a long time ahead. Rising fuel and food prices in recent months have further increased the burden on household incomes for the poor.

Source of the Problem 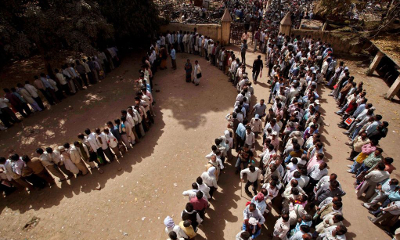 Capitalist production is driven by the motive of private profit maximisation by the owners of the means of production. The capitalists consider the wages paid to workers as a cost of production, which must be minimised in order to maximise capitalist profits. They constantly seek to get more work done by fewer workers, and to extend the length of the working day. Capitalist production inevitably leads to the creation of an army of unemployed, which serves as a reserve for the capitalist class to use whenever there is a sharp increase in demand. This was discovered by Karl Marx more than 150 years ago. He called it the “reserve army of the unemployed”.

At its monopoly stage, capitalism leads to constant and periodic wiping out of small-scale producers and traders. As it grows, monopoly capitalism destroys more jobs and sources of self-employment than the new jobs it creates.

A specific additional factor at the present time is that the capitalists have used the covid pandemic to raise the degree of exploitation of labour, cutting down further on the number of workers and extracting much more out of each worker every day.

The only lasting solution to the problem of unemployment lies in carrying out the transformation from capitalism to socialism. Conversion of the means of large-scale production from capitalist private property to socialist common property will end the domination of the private profit motive over economic decisions. From being geared to maximise the profits of a wealthy minority, social production can be reoriented to fulfil the needs of the entire population.

Fulfilling the rising material and cultural needs of the whole people will require a major expansion in the production of all essential goods and services. All women and men of working age, who are available for work, can and will be employed in the collective effort to provide for all. As productivity of labour rises over time, the length of the working day can be progressively shortened, while maintaining full employment.